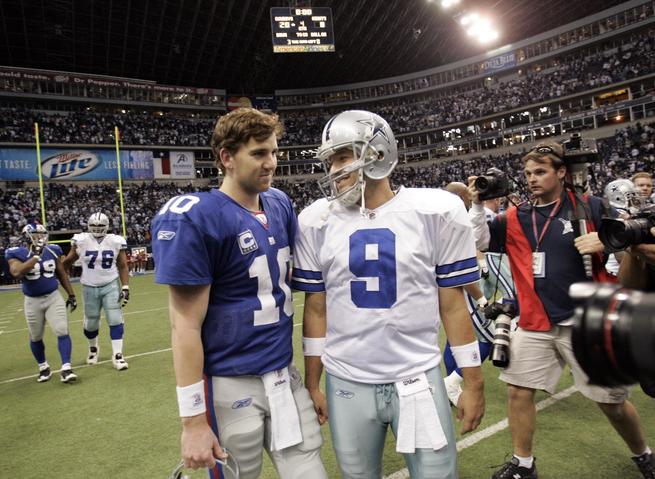 Given the results of this Saturday’s games, there was little doubt associated with what may be the Week 17 NFL flex game.  In fact, the league announced it would be Giants-Cowboys Part II on Sunday Night Football even before the end of Week 16.  Even though these two teams met on Sunday Night Football less than a month ago in Week 14, it’s the only “win or go home” game on the Week 17 schedule, so the move makes sense.  According to JP at the 506, it’s the first time since 1990 that a division rivalry sees both their games played in primetime in the same season.  Here’s the announcement from the league on the details of the Week 17 flexes for SNF and the late afternoon Sunday games:

The Week 17 Dallas Cowboys at New York Giants game on Sunday, January 1 will be played at 8:20 PM ET on NBC, the Baltimore Ravens at Cincinnati Bengals and Pittsburgh Steelers at Cleveland Browns games will move to 4:15 PM ET on CBS and the Tampa Bay Buccaneers at Atlanta Falcons game will move to 4:15 PM ET on FOX, the NFL announced today. Game times for the Chicago Bears-Minnesota Vikings and Carolina Panthers-New Orleans Saints afternoon games on FOX will be announced following results of the Week 16 Sunday and Monday night games.

Bengals-Ravens may have been the other consideration, but the NFL decided to play the AFC North games at the same time on Sunday so as to not give any of the teams a competitive advantage.  Instead, it’ll be 8-7 Dallas at 8-7 New York in a primetime matchup that will draw big ratings and uncontrollable excitement from the east coast bias crowd… and much schadenfreude from the rest of the country.  How much fun will it be to see one of these seasons blow up in likely hilarious circumstances on national television?  I for one can’t wait.  If the Week 14 encounter was any indication of how this regular season ending game may turn out, get yo popcorn ready.