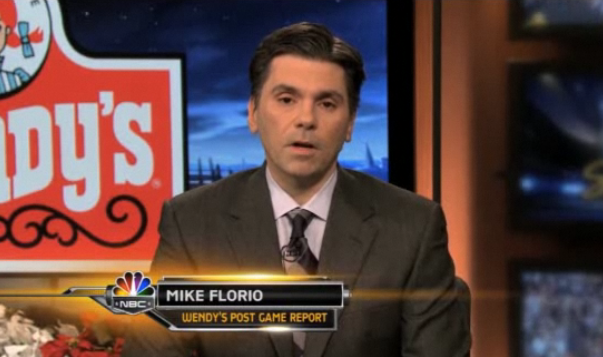 Mike Florio has been one of the most influential people in sports media and the blogosphere for the past few years.  His site Pro Football Talk reaches millions of people with breaking news and information, he’s been featured on NBC, and he’s now a supposedly respectable name in NFL reporting.  Unfortunately, Florio can also be a writer that makes Rick Reilly look like Mother Teresa and the National Enquirer the equivalent of the New York Times.  Florio’s target this weekend was Aaron Rodgers for supposedly snubbing a female cancer patient who is a diehard Packers fan.  That’s where the fun only begins, make sure to click the “continue reading” link to check out the whole story…

Florio initially came out on Saturday with an article entitled, “Aaron Rodgers has a lot to learn about where his money comes from.”  Florio makes this judgment based on approximately 3.4 seconds of video of Rodgers accompanied by somebody as they walk past a lady dressed in pink.

Paragraph after paragraph rakes the evil Rodgers over the coals for not stopping to sign a hat for Jan Cavanaugh, the cancer-stricken Packers fan.  Here’s the video:

Could he have stopped, sure.  But, he’s also wearing headphones and passes by other people standing there including a child.  He could have been in a hurry to get somewhere or he could have been just listening to his music and not in the mood to sign.  There could be a number of things going on here.  But again, Florio takes these few seconds of Aaron Rodgers’ life to judge that he is the new grinch.  Here’s an excerpt:

“Hey, it’s a free country.  Rodgers has an inalienable right to choose to behave like an ass.  And the rest of us have an inalienable right to tell anyone who’ll listen that he’s behaving like an ass.  Rodgers needs to realize that without people like Jan Cavanaugh, whose passion for pro football prompted her to go to the airport after a radiation treatment in the hopes of getting Rodgers to sign the pink hat with the Packers logo that she always wears, make his entire lifestyle possible.”

That seems like an awfully high moral ground and harsh judgment to take for looking at a three second clip and determining there is enough context and information to make a judgment on someone’s character.  Apparently, Rodgers is a prick who showers himself with his own money and likes to push over elderly people in the street.  He later updated his post with this gem:

“The folks at WBAY, who probably should have realized that the station’s relationship with the only team in town may have been undermined with the publication of the video of Rodgers treating a cancer patient like a panhandler with leprosy, apparently have taken down the clip.”

Thankfully, after this character assassination was complete, the context and the truth about Aaron Rodgers came out.  Rodgers is beloved in the Green Bay community for his charity work, especially with cancer patients.  A Fox 6 Milwaukee blog post by Jen Lada from May told of a story of Rodgers visiting children with cancer.  This is a different type of excerpt about Rodgers visiting a dad whose child died of cancer that didn’t make Florio’s site:

“And then he asked Aaron to sign the football he’d caught. He wondered if he’d make it out to his daughter. It isn’t shocking that Rodgers obliged. What caught me off guard was the dedication he made. It wasn’t until after Aaron left that I first saw the autograph… and the simple yet sweet message that brought tears to this father’s eyes: “To Cheri the angel. Save me a spot. – Aaron Rodgers”

Yes, that has supervillain written all over.  That really befits someone who treats cancer patients like lepers.  That article took about 48 seconds to research.  Then again, maybe Jen Lada is falling for #12’s evil empire jedi mind tricks.  Thankfully at least one person in the media, Gregg Doyel of CBS, stood up for Rodgers and his charitable work.  But, that side of Aaron doesn’t fit the motif of Florio’s yellow journalism.  After Florio’s hit piece, Cheesehead TV came out with a solid defense of Aaron Rodgers and also questioning the integrity of Florio and PFT (interesting if not somewhat unsubstantiated accusations).  Questioning the integrity of Mike Florio should be something that’s done much more frequently.  This is the guy that erroneously reported the death of Terry Bradshaw in 2007.  He’s quoted as saying in that New York Times article – “We’ve created a monster, and we have to keep feeding it.”

But back to Rodgers and Cavanaugh.  The story doesn’t end with that one report.  Cavanaugh herself took to defend Rodgers, yes the one that treats cancer patients like lepers.  WBAY in Green Bay, who filed the initial report, talked to Cavanaugh and confirmed that Rodgers had signed a jersey THE WEEK BEFORE!  Without any cameras around!  Here’s an exceprt from Cavanaugh and WBAY:

“I am very unhappy with people making so much out of this, because this really isn’t that big of a deal. It’s up to the players to decide who they want to give an autograph to, and that’s their prerogative.”

Just a week earlier, Rodgers autographed Jan’s pink jersey bearing the number 12 as the team departed for Philadelphia. A few years ago the now-star quarterback signed a number of things for her, too.

All of a sudden, Aaron Rodgers didn’t seem like the supervillain that Mike Florio made him out to be.  Almost immediately, Florio launched into damage control mode like any good foreign dictator would.  He again wrote on the Rodgers-Cavanaugh episode, except with more intensity, more arrogance, and more vitriol towards his critics:

Bottom line?  As we said last night on Twitter, nothing said or argued or reported since we first posted the item changes for us the image of Rodgers ignoring Jan Cavanaugh.  But if it will make Packers fans feel better to complain about our coverage of the incident instead of acknowledging (as a few grudgingly have done) that Rodgers handled the situation poorly, nothing we can say or argue or report will change that.

Translation: I don’t care that I’m wrong and you all can go to hell and play catch with Aaron Rodgers.  No, he didn’t acknowledge the WBAY follow-up and Cavanugh’s own words by backtracking and agreeing with 99% of the world that Rodgers had been treated unfairly… he instead dug in his heels to his initial position.  You see, Florio now sees himself as a victim and part of the story (and increased $$$ and page views out of this whole episode).  That’s what it’s all about for a noted trash mongerer.

To his credit, the winner in this whole episode is Aaron Rodgers.  He stayed above Florio’s yellow journalism while speaking to the situation and letting his credibility stand on its own merits.  On Dan Patrick’s show this morning, he said:

“Jan is a great fan… we had a ton of fans at the airport when we left and came back.  I’ve met Jan on previous occasions, I’ve signed for her.  As the video shows, on this trip I didn’t see her, didn’t sign for her.  This has turned into something I didn’t really expect, but I think the people of Green Bay know how I feel about them and how much I appreciate their support.”

So what does this whole episode have to say about sports media and blogging in particular?  The likes of Florio and Colin Cowherd, who sacrifice truth and integrity, hurt bloggers and everyone else in the sports media that try to be reputable.  Because PFT blurs the line between blog and news, this story will have a larger impact.  When Florio is right, he’s a cutting edge reporter with a scoop.  When he’s wrong as in this case, Florio represents the irresponsible and reckless world of blogs.  Unfortunately, as PFT has become a huge force in the sports media, Florio gets the best of both worlds.

Yes, it’s ok to criticize and have an opinion that Rodgers was wrong in this episode.  But it’s the jump to saying Aaron Rodgers hates cancer patients and the unnecessary self-martyrdom where Florio crosses the line here.  To attack someone with this much vitriol without any context or research is sloppy and unethical writing.  Florio will skate by because of his megasite and association with NBC.  Let’s face it though, if this was a random and reputable sports blog like Midwest Sports Fans, the entirety of sports blogging would be brought into question.  Oh, wait… that happened.  It’s sad that this saga will only serve to give Florio more publicity, but hopefully folks will now become more aware of this irresponsible absurdity.