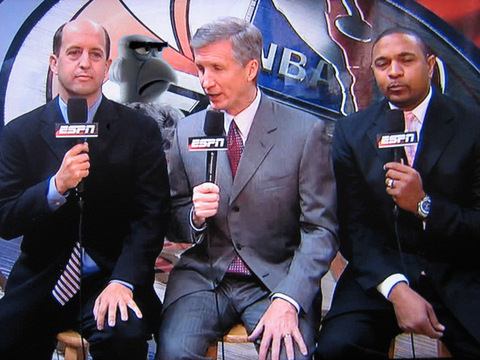 The NBA is back on Christmas Day with five games across TNT, ABC, and ESPN.  We know the announcers of the four ABC and ESPN games.  Mike Tirico and Hubie Brown will call Bulls/Lakers at 5 ET on ABC, Dave Pasch and Doris Burke will call Orlando at OKC at 8 ET on ESPN, and Mike Breen and Jeff Van Gundy will call Heat/Mavs at 2:30 on ABC AND Clippers/Warriors from Oakland at 10:30 ET on ESPN.

You read that correctly.  Bristol’s top team will call two different games in two time zones to open the NBA season in one of the more unique announcing situations on record.  Here’s what ESPN had to say about this Christmas Day double duty…

ESPN’s lead NBA commentator team of play-by-play announcer Mike Breen and analyst Jeff Van Gundy are planning to call two Christmas Day games. They will begin in Dallas when the defending NBA Champion Mavericks and Finals MVP Dirk Nowitzki host the Miami Heat and its All-Star trio of LeBron James, Dwyane Wade and Chris Bosh on Sunday, Dec. 25, at 2:30 p.m. ET. Lisa Salters will be the courtside reporter in Dallas.

Immediately following the game, Breen and Van Gundy will jet to the Bay Area for the head coaching debut of former colleague Mark Jackson with Golden State.  The Warriors will face the Los Angeles Clippers and All-Star Blake Griffin at 10:30 p.m.  Hall of Famer Chris Mullin, a Warriors legend and Jackson’s teammate at St. John’s and with the Indiana Pacers, will join Breen and Van Gundy courtside for the Warriors/Clippers game. Terry Gannon will be the courtside reporter.

Gannon and Mullin will also be on site prepared to announce the game if Breen and Van Gundy have any issues making the trip from Dallas to San Francisco… or if Heat/Mavs happens to go seven overtimes.  It’ll be a very unique challenge and experience for Breen and Van Gundy.  I honestly can’t remember a broadcast team ever attempting to announce two nationally televised games from two different cities in the same day before, on one of the biggest stages in sports no less with the NBA on Christmas Day.

We got a chance to talk to Breen about the experience.  “I’ve always considered it an honor and a privilege to do the games on Christmas Day,” Breen said.  “And to be able to do two, especially to be there for a dear friend’s coaching debut, to see the first night of his fulfilling a dream, to me it’s a privilege to be there.  It’s a really cool thing and an honor to be able to do it.”

Breen and Van Gundy plan on being in Oakland approximately 90 minutes before the opening tip if everything goes according to plan.  The opportunity to announce former colleague Mark Jackson’s first game as a head coach was a driving force behind the double duty and ESPN executives brought the idea to Breen and Van Gundy when the revised Christmas Day schedule came out.

Hopefully Jackson will be mic’d up for the game and we can hear “HAND DOWN, MAN DOWN” periodically from the sidelines.  For what it’s worth, Breen isn’t giving up hope that Jackson will return to the booth.  “I’m going to see if I can convince him to come back to the booth.  To me it’s not too late.  He can go to the front office and tell them he’s made a grave mistake and he really wants to work with Jeff and me again,” he joked.

As of now, it appears Breen and Van Gundy will be the number one team for ABC and ESPN this year, although Breen told AA the network may try different people throughout the year to fill Mark Jackson’s seat.  If a third announcer does join the team, it’ll be very tough to duplicate the on-air chemistry and success of Breen, Jackson, and Van Gundy.