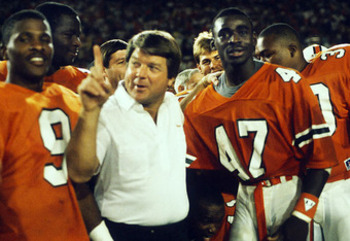 Of course, the biggest sports story to drop this week was the Yahoo report that demolished the Miami Hurricanes football program.  While the traditional sports media was caught with their pants down, Yahoo brought forward an unbelivably detailed and thorough report documenting the scandal at The U and cementing their status as the best reporting site around.  So, you could understand if the notable Cane alums in the media were a bit shellshocked by the report.

In fact, you can clearly see in interviews given this week that former U players Warren Sapp and Michael Irvin (of NFL Network) and former coach Jimmy Johnson (of Fox) are battling through the Five Stages Of Grief.  From the amateur psychologist’s point of view it really is quite enthralling…

“I know the people and the media right now are reading all these allegations.  Let’s not forget this convicted felon, he cheated people out of over $900 million dollars.  And a little parasite, you know, his entire lifestyle was a lie.  So I’m sure some of these allegations are embellished.  I’m sure some of them are lies, so, let’s wait until we get the facts before we start convicting anybody.”

Way to hold Jimmy accountable Greeny, because, you know, it’s not like these allegations are substantiated by any documentation anywhere.  Most of it is just mean and nasty rumors from a criminal with an axe to grind.  It’s not like you can click on every player involved in the investigation and see evidence that this happened…

Oh, wait… you can do that?  Well, it’s not on ESPN and Fox, so we have to wait and see before we start convicting anybody.  Yes, let’s wait until the facts come out.  Good work Jimmy, you’re on your way to coping with this…

Michael Irvin was perhaps the angriest of former Miami players in the media.  He danced around the impact of the scandal and focused his fury on Shapiro himself.  A fine strategy to try to deflect the attention away from a totally inept and corruption ridden university that let this guy walk all over the football team and athletic department.  You would think with his past though, Irvin would be hesitatnt to throw out the word “rapist” amidst his anger, as he told Max Kellerman…

I called him a snake and rapist because think about it this this way…he’s snaking people, but you are a rapist. How do you walk into someone’s home. Forget football. Forget the University of Miami. I don’t care about it. How do you walk into someone’s home and sit and eat dinner with them? Watch and look at their kids? Look at all the things in their home that they worked hard over the years to gather and then you take a check and then you go and blow away all of their savings? Man it doesn’t get any lower than this.

Now we turn to Miami sports apologist and everyone’s favorite future ESPN2 afternoon star Dan Le Batard!  You see, Dan wants you to believe that the University of Miami is just being used as a scapegoat in the NCAA’s vicious scheme and that nothing will really ever come out of it.  No, Miami is just a “loud and useless example” of the system.  He unleashed this logic in a column yesterday…

Football and basketball are what make college sports relevant and profitable. Those sports traffic in poor inner-city talent. The rules of the NCAA, the governing body, are not quite the same as the rules on the street, and neither is the desperation the same near the library on the manicured campus as it is in the ghetto. The poor inner-city talent is expected to abide by these made-up rules — rules that are not their rules, rules not made by or for the poor and continually broken by the poor — and that’s understandable. The exchange is a free education. But the only real way for a football player to make it from the desperation of the inner city to the multi-billion-dollar NFL is through the NFL’s free and monopolized minor league. These rules keep getting broken because the rules either a). don’t mean much of anything to the inner city breaking them or b). the desperation of the inner city has outgrown the rules.

Make loud and useless examples of Ohio State and North Carolina and Boise State and USC and Miami.

The only thing that changes is the name in the headlines, and that isn’t any kind of real change at all.

Getting paid by use of the enter key.

And it doesn’t help the point he’s trying to make.

Warren Sapp joined Michael Irvin on Irvin’s radio show in Miami to comiserate about the massive sanctions sure to be brought down upon their beloved U.  In Warren’s version of reality, everyone has always been out to get The U and this is just one more example.  This is victim mentality at its finest…

The conversation contiuned about Miami football getting back to basics and Sapp’s love for Al Golden.  Oh well, The U won’t be big, bad Miami for too much longer, so at least you won’t have to confront that anymore.  Sad, indeed.

Well you see, I think we’re still waiting for that final stage of acceptance.