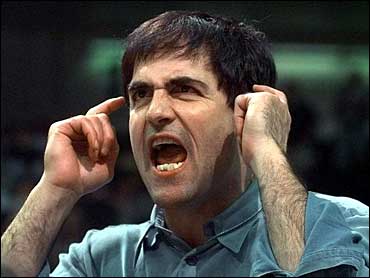 Mark Cuban has a history of being, let’s say, outspoken.  This time, he took his attention to reporters and the sports media.  There’s no questioning Cubes’ success as a businessman and a forward thinker.  This time, he may be showing his crazy Hank Scorpio world domination side.  He had some very interesting comments on everything from journalists seeking page views instead of real journalism to ESPN and the protection of their image to his ability to sway the best journalists to write for the Dallas Mavericks website.  The video and quote below come from Sports by Brooks.  Have a listen and see what you think…

“You can’t name one single person maybe outside of Bill Simmons that feels secure in their job on the sportswriting side of things.”

“The bigger point that everybody’s missing is that, they’re saying, ‘well, we’re not going to go to the Mavs website,’ trust me, if I wanted to hire you or Adrian Wojnarowski or Marc Stein and just let them go and do their thing and have them (do it) from the Mavs’ own website, I can easily do it and have just as much impact.”

Brooks successfully pokes several holes in Cuban’s comments.  The most outrageous is certainly his proposition that he can have as much “impact” with big name journalists writing for the Mavs and spinning news for the franchise.  There’s a name for that – state run television.  Check this quote pulled from The Big Lead…

“By competing with them as an information source, can we preempt their negativity with information that does a better job of selling the Mavs?  By leaving them out of the locker room and organization, do we reduce their ability to have a negative impact on players?”

The Big Lead breaks this incredibly optimistic and somewhat narcissistic notion down nicely as well.  If Mark Cuban threw a blank check a big-time journalist’s way, it would be tough to turn down, but even if that happened, someone else from the free press would step up to keep guys like Mark Cuban honest.  Although the old way of journalism and sports media is shifting, it’s hard to see someone like Adam Schefter wanting to be the mouthpiece of the Seahawks organization or Tim Kurkjan selling the nation on this year being the one that the Pirates turn things around.  Besides, even if Mark Cuban bought up all the sports journalists in the country, it wouldn’t completely accomplish his goal… that’s why we have sports blogs.