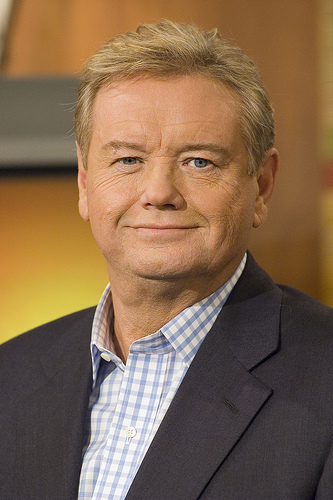 Not too long ago, some controversy broke out in the sports media world when bumbling Around the Horn “star” and Denver Post columnist Woody Paige blatantly stole a quote from John Ourand of the Sports Business Journal without attribution.  Ourand took the step of even tweeting Paige asking him about lifting a direct quote from his story.  The controversy came and went when Paige admitted to mistakenly cutting an attribution to SBJ.  However, more questions on Woody Paige and plagiarizing have come to the front thanks to the sports blogosphere’s resident investigative reporter, Brooks of Sports by Brooks.  Brooks has a full all-out assault on Paige and a questionable history of Paige and plagiarism that is worth the read.  One highlight is this from Dan Le Batard during a 2009 Miami Herald chat, who Paige also allegedly plagiarized:

…his career has kind of amazed me….my friend call him woody plaige….pre-internet, during a super bowl in miami, i went to ricky jackson’s pahokee home….wrote scene…..described town….had a scene in which ricky was coming home with a big check for his family….a few days later, paige writes the same column….but he never went to the home and he just made up some bait shop and gave some black guy a quote in ridiculous black dialect

This quote is referring to articles both men wrote about Super Bowl winning 49ers LB Rickey Jackson (tough to write that as a Saints fan) in 1995.  Paige quoted Jackson’s mother in Florida and referenced a bait shop to add context to his story, with most of the quotes and info similarly appearing in Le Batard’s previous article.  However, a few sources Brooks mentions refute Paige’s visit to see Jackson’s mother or the truthfulness of “Harold’s Bait Shop” that is described in Woody’s article…

The most damaging piece against Paige though is the “ridiculous black dialect” that Le Batard mentions.  Paige gives this quote from the shop owner in the Jackson piece:

“Rickey J gets all the free worms he wants,” Harold says. “Iffen he wins the Super Bowl.”

As Brooks reports, Paige used the unsettling word “iffen” in local interviews with folks from Georgia, Florida, Louisiana… and Scotland???  Yes, it’s as strange as it sounds and only adds to the cloud of suspicion building against Paige.  Brooks drops the hammer blow with this statement in closing:

After all, everyone knows an “elderly Scotsman” has the exact same dialect as a “Cajun Captain“, an anonymous North Georgia waitress and an (unconfirmed) owner of an (unconfirmed) South Florida bait shop.

And thanks to Paige, we now know at least one “elderly Scotsman” who refers to his booze as “whiskey” instead of “Scotch”.

For the record, Paige has denied the accusations of plagiarizing Le Batard.  But, more questions should certainly be raised.  If evidence points to Paige making up one “iffen” conversation, could they all be made up?  How many other stories written by Woody contain fabricated or stolen stories from other sources?  The Ourand controversy may have been written off as a fluke or mistake, but a pattern appears to be emerging.  The Denver Post needs to take the Brooks story very seriously.  It doesn’t matter what kind of writing you do – whether it’s sports, academic, news, blogging, or what have you – stealing someone else’s words and presenting them as your own is a cardinal sin.  It’s lazy, unethical, wrong, and should be fireable.  ESPN also must now take a look at Paige’s appearances on Around the Horn considering the major allegations against him.

One more thing… Paige had this to say about bloggers in 2009.  From Bob’s Blitz:

I give my opinion, which is based on sound information, thoughtful research and observation, unlike some kid in Arizona who is a Broncos fan and writes a blog, without proper grammar or punctuation or understanding, from his mom’s laundry room and think he knows what he’s talking about, and people actually pay attention.