Couple of noteworthy industry moves to report today as ESPN has announced that Charissa Thompson will be joining the network and co-hosting a new program in the vain of SportsNation called Numbers Never Lie. In other news Pierre McGuire will be leaving Canada’s TSN to exclusively work for NBC and Versus as their “Inside The Glass” analyst where he reports from in between the two team’s benches.

For Thompson this is a nice move up as she’s been a jack of all trades covering the NHL, Olympics, college basketball, college football, and the NFL for the likes of Fox, Big Ten Network, Versus, and Yahoo. She’s long been a top tier sideline reporter but is making a smart move leaving the crowded world of sideline reporting which includes Pam Oliver, Suzy Kolber, Erin Andrews, Michelle Tafoya, and Jenn Brown. 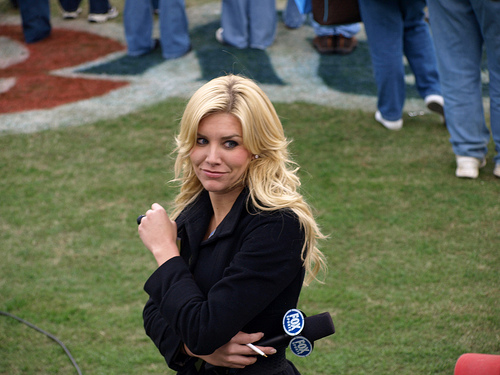 Per SBB, “Numbers Never Lie, will feature daily appearances from a former player and an expert with the half-hour show hosted by the beautiful Charissa Thompson. NNL will air weekdays at 3:30p ET.” The same production team who conceptualized SportsNation and helped spur Michelle Beadle’s ascension at ESPN will be overseeing NNL as well.

As for McGuire, his move is one that affords him a bit more convenience and additional opportunities by consolidating his worked to NBC and Versus. With NBC and Versus now part of the same company and fresh off their renewal to keep the NHL on both networks, it made sense for parent company Comcast to bring in McGuire full time. With the Olympics under the NBC/Comcast banner as well, McGuire will also be able to play a more prominent role there as well while also spending less time juggling travel, production meetings, etc for two media companies on different sides of the border.

McGuire has reputation of being a polarizing television personality with hockey fans. Despite the love-hate affair with his coverage, the folks at NBC/Versus decided it was best to double down on his experience being a former player and having covered the sport since 1996. Oddly enough McGuire was only used on NBC up until this year when the merger went through and he replaced Charissa Thompson on Versus. Despite leaving Versus it seems Thompson is on to bigger and better things.