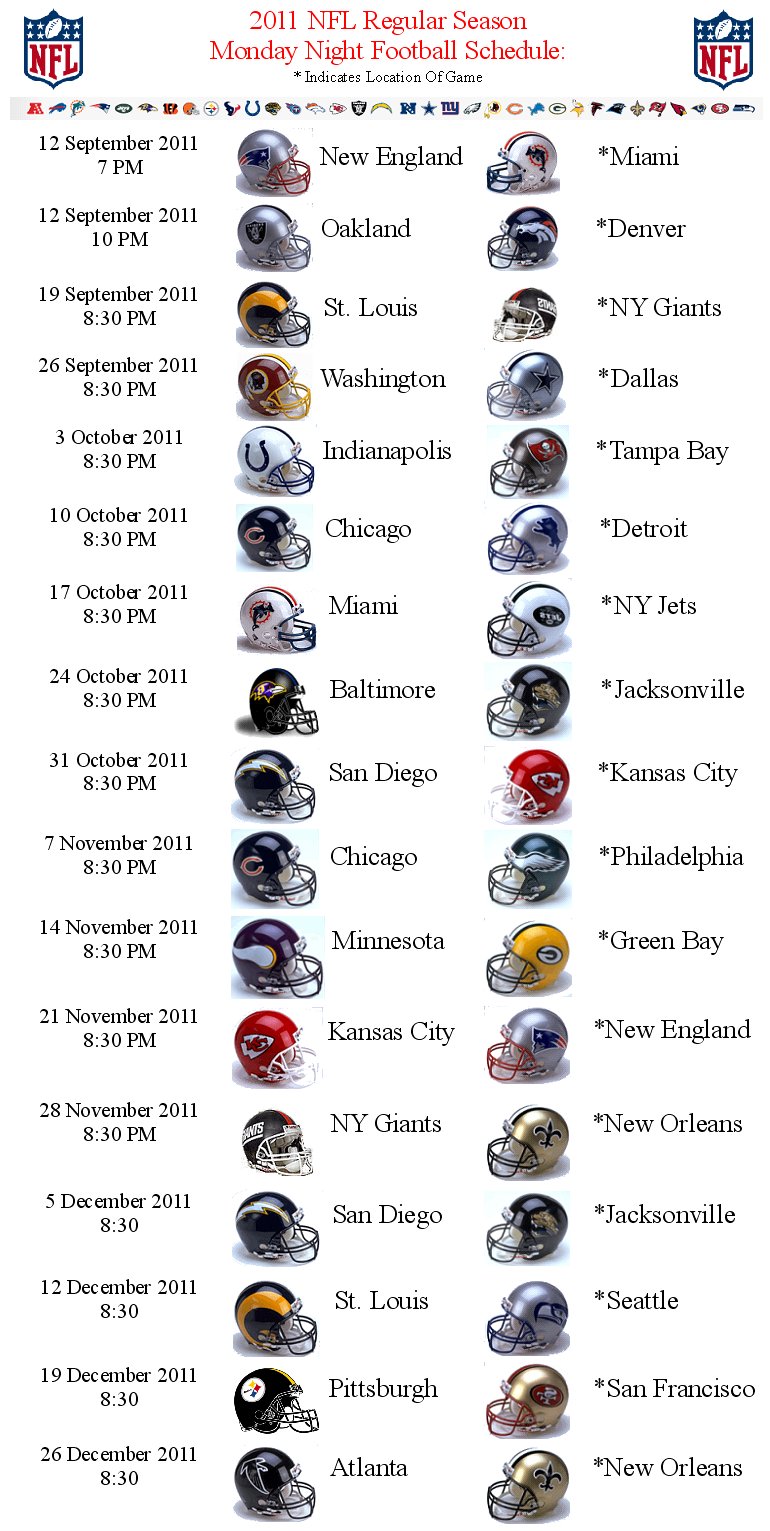 While many on Twitter were screaming foul in terms of the announcing effort put forth during last night’s Monday Night Football game, the harsh reality is ESPN doesn’t have much to work with given the lackluster matchup of the Jets and Dolphins. In fact, looking at the 2011 Monday Night Football schedule it’s painfully obvious that regardless of whatever the ratings tell us, this could be one extremely dull year.

For years, Howard Katz, the NFL’s main scheduling guru has been revered for his ability to maximize ratings and more importantly keep all the NFL’s television partners happy. Starting in 2006 when Monday Night Football moved to ESPN and Sunday Night Football moved onto network television with NBC, the scheduling gods have been less thank kind to ESPN’s biggest asset.

When this year’s schedule came out, we were pretty unimpressed with this year’s slate of games. Injuries have only compounded the problem as the Colts and Chiefs are a shell of what they were last year. Take a look at the full schedule below which will leave you as bewildered and unenthused as being handed a menu at a Vegan restaurant…

Before diving into this rant, I’d like to state that I don’t need a Super Bowl or even playoff type matchup every week. Usually one playoff team and a .500ish type team is solid enough to keep me engaged. Also, having two teams with quarterbacks who would be drafted in your average fantasy football league should be a goal.  Given how ESPN does a terrific job of marketing MNF as this institution of mental escape during a mundane existence during the week, there has to be some meat on the bones to give fans something to be excited about.

However, the above slate of games is just awful. Collectively, it is worse than seventeen random football games picked out of a hat. You could say that we were spared teams like the Panthers, Bills, and Bengals, but oddly those teams are winning or in the case of the Panthers, exciting fans with an entertaining brand of football.

There are a handful of games that are sexy though. The final two games of the year may end up having huge playoff implications. The Giants vs. Saints and Bears vs. Eagles are also games that I’ll probably look forward to as well.

But then there are the bevy of games that solicit an almost immediate rolling of the eyes. This group includes Rams vs. Seahawks, Chargers vs. Jaguars, Chiefs vs. Patriots, Packers vs. Vikings, Chargers vs. Chiefs, and Ravens vs. Jaguars. It’s likely the majority of these games will not be a one score game and many have the potential to be blowouts.

In some cases like a couple weeks back with Indy vs. Tampa Bay, we’ll get a bad team who will hang tight with a better team and I suspect there will be 2-3 more pleasant surprises left in the year. Regardless, if some of these games are competitive or not, it’s going to be a struggle to get fans to tune in for a lot of these games.

Unfortunately for ESPN, they don’t have flex scheduling for the later weeks as NBC does. While I don’t feel as if they needed that type of right to bring better matchups to one of the few nationally televised weekly football games, the NFL needs to realize they’re sandbagging one of the most watched football games by jamming way too much Blaine Gabbert, Matt Cassel, Sam Bradford, and Chad Henne/Matt Moore on me.

A good start would be giving both Super Bowl teams two appearances throughout the season and not just one. Teams fishing for quarterbacks via the draft or in free agency should probably be limited to one appearance in most cases.

Again I am not advocating for an MNF on steroids, but one of the NFL flagships should have a top five game of the week for the majority of the season. Looking at this year’s games, what do you think the margin of victory will be for the year? How much improvising in the booth during blowouts will we be subjected to as games get out of hand? How many more awkward fist bumps will we have to endure?

Bottom line is that the NFL isn’t giving ESPN and Monday Night Football the respect it deserves as well as what the fans want, which is really most important. Fans clamor for a great game when no other games are on and to throw away half the season with a bunch of duds is undoubtedly a way to hurt the sport and temper enthusiasm.