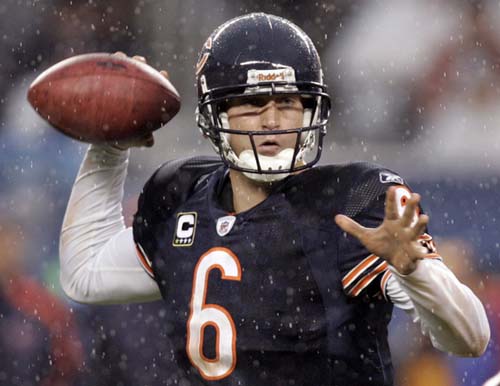 Rightly or wrongly, Bears QB Jay Cutler has had more than his fair share of critics.  Writers, pundits, fans, and even current players have all publicly expressed their disappointment/anger/snarkiness with regards to Cutler and his “toughness” and “leadership” after leaving last year’s NFC Championship game due to injury.  Considering Cutler plays behind an offensive line that couldn’t block the Rugrats and gets pummeled to the turf time and again (see Sunday in New Orleans), questioning Cutler’s toughness seems misguided and foolish.  After all, Cutler was sacked 52 times last season and only missed one game!

The mob mentality by the NFL media in the aftermath of the NFC Championship was bad enough.  If you want to see my immediately visceral reaction where I lashed out at haters like MJD and Derrick Brooks, you can click here… but don’t say I didn’t warn you.  Unfortunately, the obsession with Cutler’s body language and attitude has continued into the current season even though the former Pro Bowler has one of the worst offensive supporting casts in the league (outside Matt Forte) and has received public support from several teammates like Caleb Hanie, Brian Urlacher, and Chris Harris.  However, the worst sin of all in the obsession with covering Jay Cutler occurred during FOX’s coverage of the Bears opening game of this season.

As several other media outlets have reported, and first noticed by the Chicago Tribune, FOX presented several newspaper headlines in the 4th quarter of the Atlanta game in Week 1 to enter into a discussion about, what else, Cutler’s toughness and leadership.  Analyst Daryl Johnston even presented the headlines as “actual headlines from the local papers,” featuring beauties such as “Cutler Lacks Courage” and “Cutler’s No Leader.”  First, the video evidence from SportsGrid…

Unfortunately, the headlines were anything but true.  In fact, such headlines were absent in not just the Chicago papers, but any paper in the United States!  After the Chicago Tribune called out the FOX fabrication, a spokesman from the network was forced to admit the lies:

“Our attempt was to capture the overall sentiment nationwide following that game. It was misleading.”

To present such phony, ham-handed headlines as authentic was both lazy and disingenuous by FOX.  It wouldn’t take much work to show some of the actual tweets and headlines cruelly written celebrating Cutler’s injury and defeat. Truthfully, it’s another black eye to the network coming on the heels of their website posting a blatantly racist video earlier in the month.  FOX should know better than to try to pull a fast one over viewers in such a brazen manner.  I guess it shouldn’t be surprising that FOX would manipulate the truth to fit their Jay Cutler narrative, based on their treatment of his injury in last year’s NFC Championship and the constant closeups of his supposed aloofness. However, FOX’s feeding into the obsession with Jay Cutler’s leadership uncovers the unabashed manipulation by networks in setting the narratives of NFL quarterbacks…

Yes, I know, it’s not shocking to realize the power networks have when presenting how our athletes are covered.  Of course, I’m not naive enough to think this is a new phenomenon or only applies to NFL quarterbacks.  But, do we really take into enough consideration how media outlets establish reputations when it comes to the most important position in sports?  When narratives of our favorite athletes are eventually cast, they can be unbreakable, especially for NFL quarterbacks.  Take the case of Jay Cutler.  Before he got to Chicago, Cutler was one of the most talented, celebrated young talents in the league.  Heck, his battle with undiagnosed Type I Diabetes was actually celebrated as a profile in toughness.

However, now that Cutler doesn’t fit into what the media wants to see as a quarterback (I’m thinking the prepubescent joy of Brett Favre with the looks of Tony Romo, the acumen of Peyton Manning, and the godliness of Tom Brady), he’s been constantly vilified.  The worst career move Cutler ever made was getting traded to a market where the media could shape their descriptive story of a player who doesn’t necessarily want to open himself up to the general public or his teammates.  Now, after a full year of media bashing, it seems as if Cutler will never be able to shake the questions of toughness and leadership no matter what his teammates say or how he performs on the field.

It’s a vicious cycle of self-fufilling prophecy.  The media’s narrative of Cutler as an aloof brat has been firmly entrenched by the endless hours of debate by FOX, ESPN, and others.  Now that the role is in place, these outlets will constantly try to cherry pick evidence to support their theories.  Case in point, FOX highlighting Cutler standing on his own on the sidelines at the end of last week’s game against the Saints, which predictably, led to another dissection of his psychological profile.  I promise you every game Cutler plays this year will focus on his body language either on the field or the sidelines to feed into the persistent questions of his leadership.

Take another NFL quarterback and the emerging tale being shaped by the national media after only two career starts… Cam Newton.  Newton was one of the most polarizing, controversial figures in the recent history of college football.  (If you think Auburn won’t have to eventually vacate Newton’s 2011 National Championship I have a bridge to sell you.)  However, in the blink of an eye, Newton has gone from tarnished student-athlete to future Hall of Famer.  This may be embarrassing, but it honestly took me a full day to realize Cam Newton had actually lost his first NFL game to the Cardinals two weeks ago because all I heard was how wonderful Cammy Cam was.  And right on cue, this week’s ESPN’s Tuesday Morning Quarterback literally asks, “Is Cam Newton Already A Football God?“ 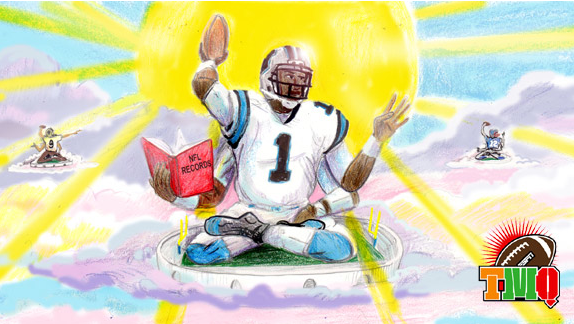 Yes, it is impressive that Cam Newton has thrown for almost 1,000 yards in his first two games as a rookie QB.  But, remind me why we play the game?  WE PLAY TO WIN THE GAME!  What would the reaction be if Andy Dalton lost his first two games while putting up impressive stats, or Drew Brees, or God forbid… Jay Cutler.  Would they be criticized for not coming through with a victory?  And hasn’t the media largely brushed aside Newton’s 4 INTs so far this season.  Hell, Michael Wilbon used the names Wayne Gretzky and Michael Jordan in the same sentence when discussing Cam Newton on PTI this week!  Really?!  He’s played TWO career games and LOST them both, and now all of a sudden he’s on a trajectory to be the best ever?  Please.

But what will the future hold for QBs like Cam Newton and Jay Cutler?  The answer is likely a steady dose of more of the same.  Now that the narrative has been set in place, won’t we be subjected to the weekly Cam Newton Watch charting his ascension?  (Statistical and spiritual perhaps.)  Most likely yes, because Newton has already been anointed as the next big thing.  On the flip side, will Jay Cutler’s mannerisms and expressions and for God’s sake where the man stands on the sidelines continue to be placed under the microscope?  Will every supposed scowl be used to undermine Cutler’s future as QB of the Chicago Bears just to lazily further what is perceived reality?  Of course they will.

These two examples are just spokes in the wheel, but the wheel will keep turning around the NFL.  Look at Tim Tebow in Denver (bust), Tony Romo in Dallas (choker), and Matthew Stafford in Detroit (injury prone), all quarterbacks who have some label affixed to them that they must continually try to disprove.

In this age of information, we should be able to take a step back and examine the ever evolving careers of quarterbacks.  We don’t need a Year of the Quarterback or a meaningless new QB Rating or fake newspaper headlines to feed into these fabricated storylines that are endlessly pushed on a weekly basis just to fill air time.

Come to think of it, maybe we feed on the storylines.  Maybe we yearn Sunday after Sunday for our quarterback to prove or disprove what the rest of the country thinks of their performance or their toughness or their body language.  Maybe… that’s the real problem.  Maybe perception doesn’t have to be reality.  Maybe if we just didn’t listen to the echo chamber, the noise would all just go away…