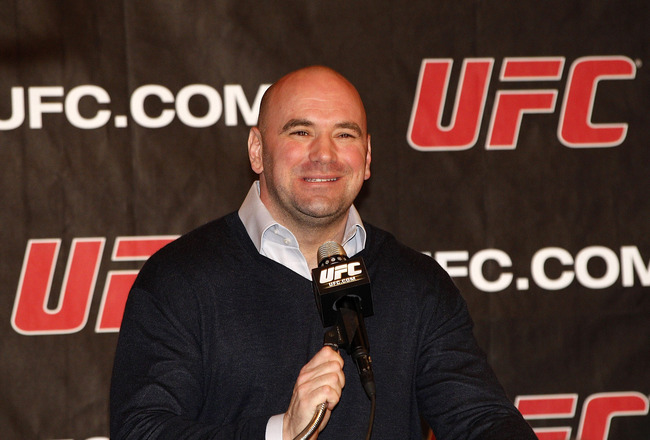 Dana White has been patient in regards to his strategy of getting the UFC onto a major network. When confronted by the fact that the UFC was late to the party in acquiring a network deal, White responded with this:

“I will not do a dumb deal. We’re not going to do a deal that doesn’t make sense. We could’ve been the first mixed martial arts on network television, but none of the deals made sense,” White said. “And as you saw all those guys [that were on network TV like EliteXC on CBS] ended up going out of business.”

Despite those strong words from White, it was easy to anticipate the UFC’s pending deal with Fox given MMA’s continued growth, but more importantly, the growing carriage fees for sports channels and the trickle down effect of highly competitive and lucrative television rights deals.

Kudos to FOX for bolstering their position by adding the UFC to the fold.

“Fox has agreed to a deal that will see the broadcast channel air as many as four MMA events per year, according to several sources. The multiyear deal would mark the first time the UFC will have consistent airtime on a broadcast network. Fox execs refused to comment on the deal, but sources with knowledge of the negotiations said bidding had gone as high as $90M per year. The Fox deal is believed to be for seven or eight years. As part of the deal, most of the weekly programming that UFC has on Versus and Spike TV will move to FX starting in January. That includes several fight cards, plus shows like the reality series “The Ultimate Fighter.”

At first glance you might say that Fox is the biggest winner in this deal, but the truth is that FX is definitely gaining the most here.

The UFC will finally be found on network television, which certainly is great for the UFC from an exposure standpoint. With the hefty pricetag though, I’d imagine Fox will potentially lose money on those broadcasts given what they’re paying. A lot of media companies lose money on sports programming if it helps their overall strategy and I think you’ll likely see that apply here as Fox gets to tap into a young, hip, and growing brand with a very distinct and attractive audience.

From a sponsor standpoint, the UFC has steadily made progress attracting mainstream sponsors, but there are still some sponsorship slots being filled by tier 2 or tier 3 advertisers. Fox can potentially change that given their pull with media buyers.

For FX, the deal is huge. The UFC brings in very high cable ratings for all their programming and this not only brings in valuable programming, but also deals a blow to Viacom’s Spike and Comcast’s Versus/NBC Sports Network. Distribution and the carriage fee for the channel will definitely see a nice bump.

There is a substantial amount of audience overlap between the UFC’s core fan-base and FX’s targeted viewer. Shows like The League, It’s Always Sunny, Archer, Sons of Anarchy, Rescue Me, Louie, and Justified show a pattern of risque programming tailored to a male audience. Coupled with college football and college basketball, FX is definitely beginning to stand out as a growing cable success story. Although considered a dark horse to obtain the upcoming 8 game NFL Thursday package, FX may be feeling saucy enough off the heels of this bold move to get aggressive with the likes of NBC Sports Network, Turner, and ESPN.

On the losing side of this is NBC Sports Network and Spike who are losing programming and viewers whose only attachment to that network was the UFC.  Shockingly, Manswers and Deadliest Warrior just don’t do it for some folks.

It will be very interesting to see the quality of the events Fox and FX will be getting given the UFC has loaded their PPV’s compared to the cable events. Also, it will be interesting to see if the UFC and Fox continue with the same announcing teams for their events or look to bring in some internal folks at Fox like Gus Johnson. I imagine we’ll be spared of Joe Buck, either way. Most likely you’ll be hearing the most overused call of all time of “AND IT’S ALL OVER!” coming to to Fox and FX shortly in 2012.