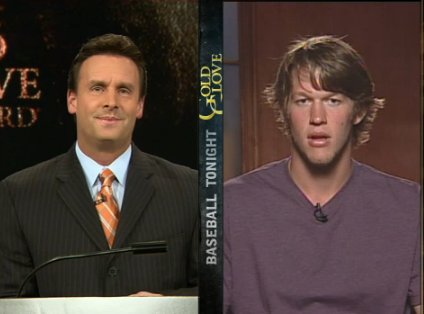 ESPN televised a Gold Glove awards special last night, although according to the reviews, there wasn’t much special about it.  While the awards themselves were questionable, there was also the format of the show, the analysis, and the actual ESPYish presentation to consider as well.  The following is from Lead Editor Joe Lucia of Bloguin’s MLB blog – The Outside Corner, on the ridiculousness of the show and the awards presentation.  Clayton Kershaw was clearly not entertained.

After being delayed 45 minutes because of a MAC football game that featured over 120 points being scored, ESPN’s broadcast of the Gold Glove awards “ceremony” started at around 10:45 tonight. First off, why would you schedule something like this behind a live event that has potential to run late? That’s just a ridiculous idea to begin with. I’m not sure why the need for a show like this was even needed, especially needing to be stretched to AN HOUR.

The panel featured Karl Ravech presenting, with John Kruk and Barry Larkin making their picks for the awards. Typically, their picks didn’t focus on defense, with the duo talking about how great offensively their choices were, along with mixing in various vague descriptors like “you go to the ballpark to see him play defense.” They also were stuck in the old school mentality, talking about errors and fielding percentage, which are two of the more inane ways to describe a player’s defense in 2011.

ESPN would bring out a “special guest” to present each “segment” of awards. They didn’t exactly bring out superstars either, with former Cardinal Mike Matheny announcing the catcher and pitcher winners, former Oriole Paul Blair, who was in his prime 35 years ago, announcing the outfield winners, and Omar Vizquel announcing the infield winners. None seemed very comfortable, with Blair coming off like a pretty big asshole talking himself up (including claiming to have never made an error, when he actually made 54 over his career). Vizquel seemed all out of sorts, stuttering through the announcements of winners and having Ravech fill in some of his blanks.

And then, there were the winners:

Among the list of snubs, Brett Gardner was downright robbed in left field for the AL. He was far and away the best defender in baseball at any position, and he’s going home empty handed. The same could be said for Peter Bourjos in center. Markakis winning is an absolute joke, and he clearly won the award because “he has a good arm”… considering that’s all they talked about after he won.

Oh, and to put a cherry on top of this? Fans didn’t even need to watch the awards show. The AP put out a press release before the show started….which ESPN put on their website. I wish I would have known about that more than 25 minutes into this, so I didn’t have to sit through that disaster.

Check out more great baseball coverage, including the Movember MLB Mustache Madness Tournament, at The Outside Corner