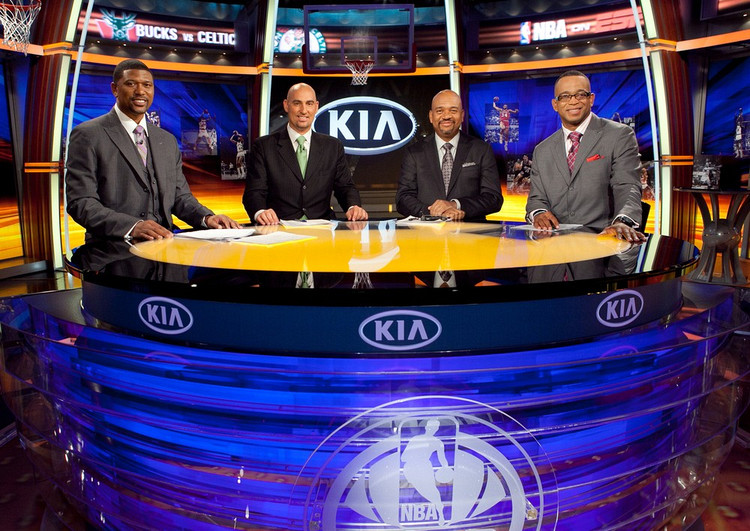 ESPN’s pregame NBA coverage has been lagging far behind TNT’s Inside the NBA crew for a long, long time.  To try and bolster their on-air NBA lineup in the studio, ESPN pursued the biggest television free agent this summer, Shaquille O’Neal.  However, Shaq decided to spurn ESPN to join up with Kenny, Chuck, and EJ to make for what will most likely be the most entertaining studio show in sports TV history.

Lost in the shuffle of Shaq’s move to TNT though, was the response from ESPN.  Losing out on one of the most coveted retired players in NBA history had to hurt ESPN’s vision for improving their NBA studio coverage.  The studio crew of MIke Wilbon, Jon Barry, Stu Scott, and intermittent doses of Magic Johnson was some combination of bland, forced, and uninspiring.

Well, with the lockout over, we finally have learned what tweaks ESPN is making to their NBA studio crew, and the result looks like a recipe for disaster.

According to SI’s Richard Deitsch, ESPN is moving their NBA studio crew to Los Angeles to double down on, gulp, Magic Johnson…

Not only is ESPN investing more time in one of the most overvalued studio analysts, they’re shunning the use of a conventional studio host, swapping Stu Scott for Chriss Broussard?!?  The move does give Broussard a bigger platform for some of his more infamous “reporting.”  At least we can all rejoice that it’s Broussard instead of Screamin’ A.  Still, this fearsome foursome has the makings for trainwreck television on a weekly basis.

Perhaps ESPN has been wowed by their NFL show Audibles, where NFL analysts are able to have a free-flowing discussion about topics without the need for a traditional point man.  But, ESPN’s missing the fact that Inside the NBA’s MVP isn’t Charles Barkley, it’s Ernie Johnson.  EJ is the glue that makes Inside the NBA what it is because he allows guys like Kenny, Chuck, and C-Web to be the stars of the show.

Who will fill that role on the new ESPN studio crew?  Mike Wilbon might be practiced at forced debate, but can he really play point guard with the likes of Jon Barry and Magic Johnson?  Has Magic Johnson said anything interesting or relevant that wasn’t about the Lakers?  WIll Chris Broussard have any news or insight to break that isn’t about LeBron? (Don’t forget he was handpicked by Camp LeBron to break his move to the Heat before the Decision.)  And God forbid this becomes another cavalcade of celebrity catastrophes by moving to L.A. like those awful MNF celebrity interviews.

You know what… on second thought, maybe this will be must-see TV…. as the worst pregame show in the history of sports.  Someone get Shannon Sharpe on the phone quick, because these guys are going to have to practice hard on their forced laughter and hijinx.

Update: Jim Miller also reports that ESPN and ABC couldn’t come to an agreement to have perhaps their most popular NBA pundit appear on the air.  Bill Simmons.

ESPNBook Months of talks have failed for @sportsguy33 to join ESPN/ABC NBA shows. Yes, he’s got @Grantland33, but something needed to be worked out.

It’s hard to believe it would be so difficult for ESPN to have their top online presence appear on television, let alone the guy that literally wrote the book on basketball.  What would be keeping Simmons from appearing on ESPN airwaves covering the NBA?  Whatever the case, it’s just another missed opportunity for the leader.