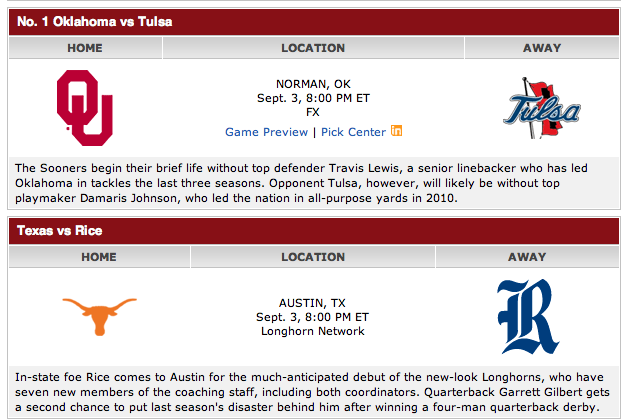 Texas A&M has taken the plunge to leave the Big 12, compelled by the level of uncertainty that the conference faces going forward having one institutional member involved in a business and promotional relationship with ESPN. Texas supporters think the Aggies are being irrational and the Longhorn Network is nothing worth fleeing from the Big XII over – A&M’s concern over Texas’ “we’re super special and awesome” TV deal with The Worldwide Leader is overstated.

Enter Exhibit A of ESPN bending the rules for Texas. In this article previewing all Top 25 games from Week 1, ESPN took the liberty of adding one extra game to the list. Although unranked, the Longhorns’ game against Rice (which of course is on The Longhorn Network) finds itself oddly added to the article.

Now this isn’t the biggest deal in the world, but it’s clear that ESPN’s editorial agenda is now being dictated by their business relationships. If this was a preview of interesting games, or “big programs,” or something along those lines, then of course Texas should be in there.

This article though is a Top 25 preview, a feature ESPN has had for years. Teams EARN the right to be highlighted here and the criteria is self explanatory. You’re either a top 25 program or you’re not. That is unless your school has a relationship with ESPN and wants to promote their first game on a new cable channel.  Note that Rice’s visit to Austin is also “much-anticipated.”

Where will the special treatment stop? Is College Gameday going to spend one Saturday a month covering a Texas game? Will the Longhorns get their own ridiculously stupid version of “The Heat Index” on ESPN.com?

Ed Note: Texas is indeed ranked 24th in the ESPN/USA Today poll.  However, ESPN’s list of Top 25 games uses the AP Poll as West Virginia is clearly seen at the link as being ranked #24 in the rundown of games.  Similarly, Penn State, who is #25 in the ESPN/USA Today Poll and unranked in the AP (as Texas), does not see their game included in ESPN’s list of Top 25 games.  Nor is there a note explaining Texas’ presence in the list of AP Top 25 games when they are unranked in that poll.