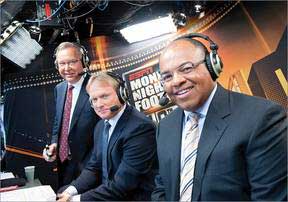 In news that isn’t too surprising, ESPN agreed to a massive extension with the NFL to keep Monday Night Football on the leader until 2021.  That means ten more years of “this guy!”  This eight year extension is worth a ginormous 14.4 BILLION dollars throughout the life of the deal.  Yes, BILLION.  That’s 1.8 BILLION dollars per year according to Sports Business Journal.  If I can play Darren Rovell for a bit, that’s 105.8 million dollars per game for the seventeen that are televised throughout the MNF season.  26.4 million dollars per quarter.  1.7 million dollars per minute.  And, 29,411 dollars for every second of NFL game action on the network.  Wrap your mind around those numbers.  However, those billions and billions of dollars aren’t just being spent on MNF.  ESPN will also keep the NFL Draft, add some mobile rights, and most importantly of all, they get back the Pro Bowl!!  I’m shocked that wasn’t the lead headline.

As another part of the deal, ESPN is also receiving “Expanded highlight rights across ESPN’s television and digital platforms.”  This leads to the other major news to come out of this new deal – several more hours of NFL programming across the ESPN networks.  In fact, if somehow you aren’t a fan of the NFL and think that ESPN pays way too much attention to the NFL as it is, you may just want to leave now.  Frankly, this is a move that had to happen with ESPN’s addition of several hundred new NFL analysts and the runaway freight train that is the Shield.  You don’t think ESPN signed Eric Mangini just for his congenial personality, did you?  Here’s the details…

*Sunday NFL Countdown expands to three hours (10 AM – 1 PM ET) every Sunday morning during the season.  This means that Outside the Lines and Sports Reporters are bumped to ESPN2 at 10 AM and 10:30 AM respectively.  A small village of ESPN personalities will be appearing on the new, bigger and supposedly better version of Countdown.

*NFL Live expands to one hour each weekday (4 PM – 5 PM ET).  Jim Rome is bumped to ESPN2 where he forms a new afternoon lineup with Dan Le Batard and others.  Trey Wingo will host, which is a good thing as he’s one of the best in Bristol.  He’s certainly being groomed to take over from Berman as lead NFL guy at the network… let’s just hope that happens before 2021.  I can’t take 10 more years of Da Schwam.

*AND, two new shows will debut.  If you’re still with me, God bless you.  You must be either the biggest NFL fan in the world or you’re just dying to know when Chris Mortensen will finally be co-hosting his own NFL show.  Well, you’re in luck!  Mort and Suzy Kolber will co-host a new show called NFL 32 (6 PM – 7 PM ET on ESPN2), which as the name suggests, may actually try to cover every team in the NFL.  Because, you know, ESPN really only covers the Jets, Eagles, Patriots, Colts, Packers, and Team Tebow.  My guess is this is where Titans, Seahawks, Bengals, and Browns fans will go to feel better about themselves and pretend ESPN cares about them.  Nah, let’s not kid ourselves.  It’ll probably still be the same stories that you see on Mike & Mike, First Take, SportsCenter, SportsNation, Jim Rome Is Burning, NFL Live, Around the Horn, and PTI.  Oh well, it’s highly interactive and unscripted, which means there’s a chance Keith Olbermann might show up in a leather jacket!

*The second new show is NFL Kickoff, an hour long show on ESPN2, Friday nights at 7 PM ET. It basically seems like a fusion of NFL Primetime and NFL Matchup, where analysts will cover each game of the upcoming weekend.  Berman will launch the show for the first two weeks, but then the key players will be Trey Wingo and Mark Schlereth.  Seems like a decent idea and a proper preview show for the week’s games.

My only hope is that all of these shows just don’t feel like the same old ESPN programming with the NFL, where they talk about their two or three obsessions and largely give the hundreds of other stories in the league the brush off.  If I’m going to hear about “The Dream Team” or something “outlandish” Rex Ryan said on a given day, I won’t be interested.  That’s why I’ll be most interested to see what the NFL 32 show is all about – will we actually see ESPN take advantage of these new shows and go deeper with their analysis and coverage?  Now if you’ll excuse me, I need to go get some oxygen.  I feel like Keith Traylor after this play…