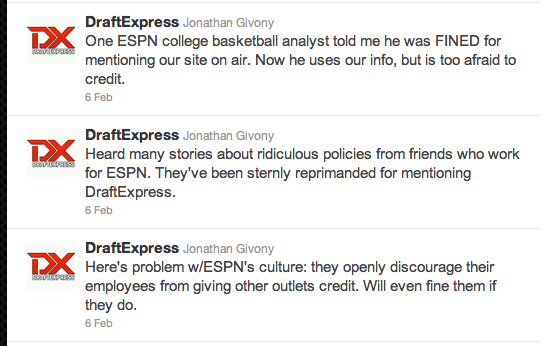 SI.com writer, Luke Winn, had a good idea. For one of his upcoming columns he’d breakdown the distribution of entry passes to Ohio State big man, Jared Sullinger.

The end result of 4 hours of film study of all of Ohio State’s games was this nifty graphic below. 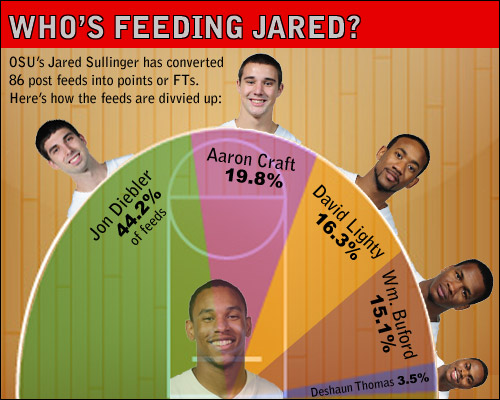 The graphic above was published in Winn’s column that ran on Thursday which you can find here.

Imagine his surprise when he found the below shot from ESPN’s broadcast of Ohio State’s showdown versus Minnesota on Sunday. 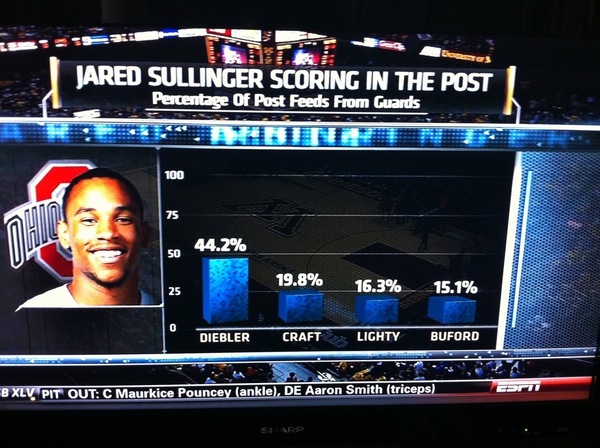 You could play devil’s advocate that this was just a coincidence, but ESPN has already owned up to the mistake.

“A graphic that aired on a Feb. 6 Ohio State vs. Minnesota telecast on ESPN did not carry the proper attribution. The graphic, which detailed passes into the post to Ohio State’s Jared Sullinger, was compiled by Luke Winn of SI.com. The credit ran at the end of the telecast, rather than on the graphic itself as it should have.”

ESPN’s apology came after Winn took to Twitter complaining about the usage of his research with no attribution which not only prompted a swift apology citing it was a “big mistake” (his wording on Twitter), but also a lively conversation on Twitter where others complained about ESPN attribution issues.

In particular DraftExpress, a great resource for the NBA draft, volunteered this info on ESPN on air attribution issues.

While we’ve certainly seen sites credited and mentioned on ESPN and even selected as Site of the Day on Sports Nation, there seems to be enough smoke here that begs the question: does ESPN look to avoid mentioning other online competitors in certain situations?

Personally, I can attest to a trio of incidents in which I had to write to ESPN for explanations for lack of attributions when I worked at Yardbarker. They include:

– During the 2008 NBA finals, ESPN published a story in which they quoted Rajon Rondo’s Yardbarker blog about his availability to play with a foot injury he sustained. No attribution was given to Yardbarker. The quotes were presented as “Rondo said” when in fact he wrote the quotes on his blog at Yardbarker.com. After some complaints that were never returned the article changed with new quotes and attribution for his quotes on Yardbarker.com.

– On NFL Live, ESPN showed a graphic quoting Vernon Davis on his thoughts being sent to the locker room during the game by Mike Singletary. The entire quote was from his Yardbarker blog. Instead, the graphic attributed the quote to something like “The ESPN The Magazine Morning Roundup of Athlete Blogs”. Such a feature to my knowledge never existed before. After an inquiry to the Ombudsman, multiple apologies were sent, including one from an NFL Live personality. His apology was a lot more telling and poignant, calling the move “extremely bush league”.

– ESPN again ducked attribution to Yardbarker when quoting Donovan McNabb’s blog. Instead they listed his personal website which doesn’t have a blog (perhaps because Yardbarker is a general sports site and McNabb’s website was a personal site). Yardbarker complained and ESPN apologized.

There has been plenty of other incidents along the way including this infamous plagiarization of a Pro Football Talk article and an anchor recently being suspended from stealing his lead from a newspaper.

Are these isolated mental mistakes or do you agree with DraftExpress’ take that ESPN feels the need to at times be creative in terms of bypassing proper attribution for research and content of certain competitors?

Although I’d like to give ESPN the benefit of the doubt with some of these mistakes, I tend to think there is some pressure or at least a habit to liberally recycle other’s content/research without proper attribution. The Vernon Davis and McNabb incidents for me personally were the last straw as they didn’t just forget to attribute, but rather invented non-competitive entities to attach attribution to. Also, the “off the record” apology for the Vernon Davis incident seemed to be motivated not by guilt from being part of faulty reporting, but guilt stemming from being complicit in a concerted effort to skirt proper attribution.

We know that many of our readers are fellow bloggers and that many of you are indeed ESPN employees. Feel free to email us with a tip or comment on this article to share your thoughts on ESPN’s attribution woes.