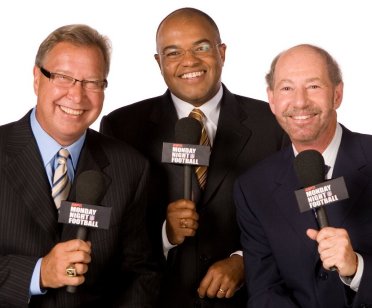 AA has just received an advanced copy of Those Guys Have All The Fun: Inside The World of ESPN, written by James Andrew Miller and Tom Shales.  Yes, it’s true, the book does come in at 745 pages.  It’s an impressive piece of work.  Judging from the excerpts released and what I’ve been able to skim through so far, the book will certainly be worth the read.  Off the top, the first thing I wanted to investigate was ESPN’s Monday Night Football booth and the Tony Kornheiser experiment, especially after reading this tweet from Deitsch.  Was there any animosity behind the scenes regarding TK on MNF?  The book makes it clear that Tirico and Kornheiser’s working relationship was terrible and their lack of chemistry led to TK’s ultimate departure from the MNF booth and the arrival of Jon Gruden.  Below are actual excerpts from Those Guys on Kornheiser, Tirico, and Monday Night Football…

The football game is surrounded by a bevy of wide-ranging opinions in the pregame shows, the postgame shows, and the talk shows during the week.  People come to the game for the game itself.  So we were trying to make what Tony does best – strong opinions – work within the body of the game; that was the challenge.

We had a lot of philosophical disagreements, especially about the extent to which it was an entertainment show.  When they had guests in the booth, many of them stunk beyond words.  I was for MNF as I remembered it as a child with Cosell and Meredith and Gifford, but Mike really just wanted to be the play by play guy on MNF…

Early on together I said, “Mike you know what really works well on PTI is when Mike and I talk over each other -” and he cut me off right there and says, “That’s a nice little studio show, but MNF is very important, so don’t ever interrupt me when I’m talking.”… for two years he didn’t even look at me.

Look, am I happy now?  Absolutely.  In PTI, I’ve got the best show in America…  But I thought I could have been better on MNF…  But the happiest guy in America today is Mike Tirico, because I’m not in that booth and he’s got a coach, so he doesn’t have to worry about anything else.

Tirico’s always been nice to me, and I think he’s a talented guy, but I thought how he acted was unforgivable, and I continue to feel bad for Tony… I had watched all of those Kornheiser games thinking, “If I was in that spot, and the expectation was that I was supposed to entertain, and had this guy with me who was subtly undermining me, changing the subject on me and greeting my jokes with dead silence, I would eventually strangle this person on live TV.”  Kornheiser is a better person than I am, apparently.

Tirico doesn’t sell for Tony for three f*cking years, then has the gall to say nice things about him after Tony leaves?  Come on.  What kills me is that Tony got the rap for blowing this when nobody on the planet can succeed in TV if their play-by-play guy isn’t selling them.  Five minutes into their first regular-season Monday night game, Tirico had already laughed at more Gruden jokes than he did for three years of Kornheiser.

Wow.  A few thoughts on this excerpt and what I’ve gathered from the media coverage and other excerpts thus far…

-Tony Kornheiser and Bill Simmons will be two stars of the book.  Those two are probably among ESPN’s Top 5 well-liked and popular personalities by most of the American public, and they come off as very outspoken and honest in the quotes I’ve seen so far.  Simmons especially has some other interesting quotes that are floating around the internet and the Berman/Kornheiser feud has been chronicled as well.  Simmons also emerges as somewhat protective of Kornheiser through this passage and others I’ve seen.  They will emerge as two of the ESPN interviewees that readers will be talking about the most.

-Miller and Shales did an outstanding job reaching so many people to interview for the book and getting them to talk candidly.  What will be really fascinating is the fallout from Those Guys and the potential feuds that may arise because of the book between current ESPN personalities and across the sports media.  USA Today even has the Top 10 feuds coming out of the book already, and it hasn’t even been released to the public yet.

-Who would have thought that Mike Tirico was so influential in Tony Kornheiser’s downfall on Monday Night Football?  Watching those broadcasts, fans always knew the broadcast chemistry was non-existent, but to see the working relationship as this toxic is surprising.  It appears that Kornheiser was doomed from the beginning because Tirico (purposely or not) no-selled TK as a broadcaster and game analyst.  It may be easy to vilify Tirico coming out of this (Bill Simmons does a great job of it), but there’s also critiques of Kornheiser’s lack of preparation and Tirico’s struggling with how to utilize Kornheiser in the broadcast.

-From the beginning, the Tony Kornheiser experiment was set to fail… at least with Mike Tirico as a play by play man.  Announcers have to make each other look good and work as a team.  Look to Pat Summerall and John Madden and even ESPN’s NBA trio of Breen, Jackson, and Van Gundy.  Those groups succeed because the announcers work together and help one another in the broadcast.  That effort clearly didn’t happen with the Kornheiser-Tirico pairing.