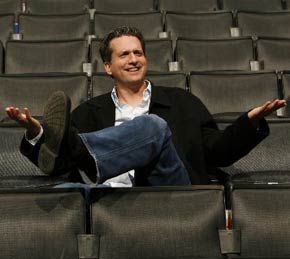 Perhaps nobody symbolizes ESPN’s meteoric rise to total dominance of the sports world in the last decade than Bill Simmons.  Simmons came to ESPN in 2001 as the Boston Sports Guy – an entertaining bloggerwriter with a relatively small, devoted following.  In the last decade, Simmons has grown to the biggest online force in sports.  Those thousands of readers have turned to millions.  Millions also download his podcast as well.  Bill Simmons has grown his online platform to starting the new Grantland.com project as an extension of his online work the last decade… and millions will flock there as well.  You may or may not be a fan of Simmons, but one can’t deny his monumental success.

But, Simmons isn’t just an online presence – like ESPN itself, he has come to grow his own brand in many ways.  Some would say Simmons has his own world.  He was instrumental in the success of ESPN’s 30 for 30 documentary series, widely praised as one of ESPN’s best ever efforts.  He’s written a #1 New York Times Best Seller.  He’s filled in as a guest host of PTI.  He’s even announced an NBA game with Dan Shulman and Mark Jackson (although he evidently doesn’t think announcers matter at all… I guess that means he’s not an AA reader?).  In truth, Simmons is ESPN in 2011… which is what makes his conflict with ESPN so intriguing.

There have been many controversies regarding Bill Simmons and Bristol.  Whether it’s nixing President Obama on his podcast, a suspension for combative tweets (ESPN book excerpt here), or general feuding with the network… there always seems to be some sort of drama pitting the Sports Guy against his ESPN bosses and the Bristol machine.  Perhaps then, it’s not a surprise that Bill Simmons is one of the most outspoken and honest ESPN personalities in Those Guys Have All The Fun when it comes to being critical of ESPN.  We shared some of Simmons in our excerpt yesterday going after Mike Tirico for how he handled the Tony Kornheiser experiment on Monday Night Football.  Today, our excerpt (albeit much smaller, we’ve hit the 500 word limit, sorry folks) is a revealing statement from Simmons on the culture of ESPN and Bristol that gives insight into the relationship between Simmons & ESPN and a window into what one of ESPN’s top personalities thinks about the Bristol mothership…

“I need to figure out a way that I can operate in my own sphere and not deal with Bristol as much.  Nothing against Bristol, but I do worry that it becomes a little cultish after a while.  You go there and there’s ESPN everywhere.  At the cafeteria, there’s Mike & Mike getting a sandwich… It’s really hard to think out of the box when you’re trapped in that box the whole time… that’s one of the reasons PTI succeeds – it’s in Washington, it’s out of the box, they leave it alone.”

Describing Bristol, CT and the beautiful ESPN campus as “a little cultish” will not make anyone in a cushy office there happy…

I don’t necessarily agree with Simmons all the time, but this paragraph resonates.  ESPN is so caught up in the ESPN machine (according to author James Miller, the company is worth more than the NFL or NBA/NHL/MLB combined.  The author estimates ESPN is making over 8 Billion Dollars in revenue, yes BILLION), being ESPN, hyping ESPN, and forwarding the agenda of ESPN, that it’s not surprising that Bristol would become such an insular world.  I remember being a little freaked out when all of a sudden, ESPN personalities started referring to the mothership as the “ESPN campus” like it was some sort of party school… well, judging by some of the stories, that may be true!

My curiosity about the Bristol life and the ESPN campus is only heightened by this quote from Simmons, who is a Bristol outsider.  Do Simmons and other off-campus personalities view Bristol as something out of Willy Wonka?  Perhaps 1984?  Or is the Stepford Wives a better comparison?  It is based in Connecticut after all.

Reflect on what Simmons has to say though – the best products that ESPN has put together over the past several years have all been located outside The Village of Bristol.   Pardon the Interruption, Simmons’ writing, 30 for 30, the 2010 FIFA World Cup coverage… these products are/were located outside of Bristol and don’t necessarily fall into the traditional ESPN umbrella (in fairness, neither did The Decision).  What isn’t on that list are things like Who’s Now, First Take, and hours of NFL Live that originate from within the Bristol sphere.

One of the huge stories out of the ESPN book will of course be Bristol’s response to the controversy, feuding, and criticism that is leveled in the book.  Daulerio reports there are already discussions of suspensions and discipline relating to current ESPN personalities and what they have to say in the book.  With everything invested in Simmons, it’s doubtful that he would be involved… I think.  The question that these stories and excerpts bring to mind is this – will ESPN continue to tighten their control, circle the wagons, and withdraw further into the Bristol cocoon or will they become more transparent, open, and willing to break the mold… like their most popular columnist?  Time will tell.