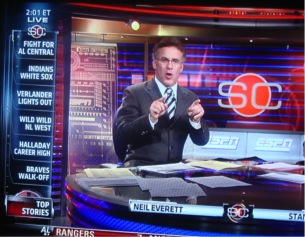 If you’re a college football fan or even just a fan of good journalism, Charles Robinson’s bombshell of an article chronicling nearly a decade of rampant rules violations was potentially one of the best reads and most gripping investigative pieces in quite some time. It’s a thing of beauty, and very refreshing considering a lot of the fluff that passes for news these days.

It’s not just the story itself, but the depth of the reporting which apparently spanned almost a full year. This isn’t Yahoo’s first splash on the investigative front as they’ve delivered on accurately reporting and breaking stories surrounding UCONN, USC, Oregon, and to a lesser degree Ohio State whose own internal investigation seemed to find it’s way to Yahoo ahead of major developments.

Yahoo is so proud of their investigative track record, they have a great landing page showcasing their past investigations as well as a more thorough breakdown of the brewing Miami scandal. If you click on that link, you’ll find UNIQUE links to 65 current and former Hurricanes and the evidence tied to each one’s alleged role in the scandal. There are also links with findings and evidence tying in 7 players who signed to play football elsewhere as well as findings for 10 Miami coaches, managers, and various personnel. You have to wonder what may have been on the table for the 7 players who chose not to go to Miami given they were already tapped into a booster giving them illegal benefits.

Not only is the featured article extremely potent but the 82 individual breakdowns are all very impressive. Frankly speaking I don’t even think NCAA formal investigative documents have been this well organized, researched, and corroborated.

This got me thinking about just how poor of a job traditional media has become in doing investigative reporting, especially reporting on powerful programs and leagues that are a huge part of their content strategy. In fact, I contend that now more than ever, independent digital voices are the only reason any movement has occurred at all on this front.

“During the final game in the Orange Bowl in 2007, with the Hurricanes being embarrassed 31-0 at the half against Virginia, Shapiro, intoxicated, said he confronted Miami’s head of compliance, David Reed. According to a witness to the event, an incensed Shapiro was stalking through the Orange Bowl press box at halftime when he spotted Reed.

In a rage, Shapiro began cursing at the compliance director, calling him a “sissy” and other derogatory names, while attempting to draw him into a fight. In Shapiro’s mind, Reed was part of the problem in a slumping Miami program, largely for what Shapiro thought was too much oversight on relationships between players and boosters. And in Shapiro’s mind, that was worth fighting picking a fistfight with the head of compliance in a crowded press box.

“It was a huge scene,” said a witness who helped pull Shapiro away on that day. “All the people in the press box, the people sitting in the seats, they were all watching the entire thing. Nevin wanted to fight him. He was up in his face screaming. I was like ‘Oh my God. He’s going to punch [Reed] in the face.’”

I get that investigative reporting requires sources, time, editorial approval, and resources, but this just blows my mind.  You have a BOOSTER who is oddly in the press box BERATING a compliance employee and trying to fight the individual. Apparently the ENTIRE press box of “reporters” witnessed this huge scene.

Did anyone in that press box report this incident? No. Did ESPN, who was broadcasting the game, follow up on this pretty telling episode? No. You would think a rich flashy booster often seen around town with players and coaches yelling at a university employee about being too strict on compliance would warrant someone in that press box to look into matter, but apparently not. Now I see why teams/colleges don’t like to give press box credentials to bloggers. Most would have blown the whistle in a second… probably via Twitter if something like that unfolded.

The reality is that ESPN and all the other newspaper writers, TV personalities, Scout, Rivals, and radio folks in that press box that day just don’t want to ruffle any feathers and bite the hand that feeds them. There is just no incentive to go after a team, college, or league’s dirty laundry when a good amount of your programming and content stems from covering and promoting that institution.

With all the resources spanning ESPN, SI, and even the Sporting News, it’s been somewhat of a revelation to see their reactions to Yahoo’s real deal story. Both SI and ESPN pushed all in drilling into Ohio State hoping to strike oil. What did that investigative reporting turn up? The NCAA didn’t find much as SI and ESPN for the most part relied on a couple unnamed sources who were unable to connect the story back to the program outside of the one email that the university, not the media had turned up.

SI and ESPN continue to pound away at Ohio State even after an athletic program equivalent to a colonoscopy. Meanwhile Yahoo and independent bloggers are hitting pay-dirt. Yahoo also nailed Oregon, something ESPN continues to largely ignore.

Sports By Brooks and Outkick The Coverage have been causing a stir by pointing to some very strong circumstantial evidence of a booster problem at Alabama. As of yet, even with presented with evidence, ESPN and others have shyed away from the story for the most part. Could it be ESPN is a little gun shy here given Alabama’s Nick Saban is featured heavily in their “Blue Print For Change Series?” 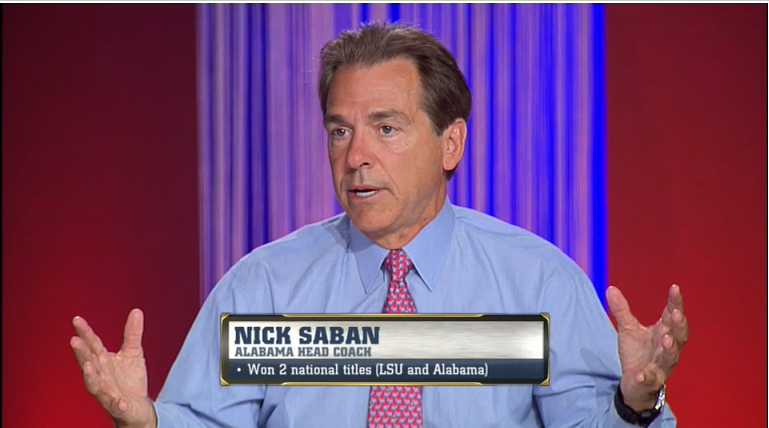 ESPN’s lackluster investigative reporting the entities they work with is one thing, but it’s a little surprising to see how they and others have reacted to the news. It was noted that even 2 full hours after the story broke, ESPN had no mention of it on it’s websiite. When an article surfaced, it didn’t link to Yahoo’s article despite mentioning Yahoo 11 times in their article. Shady business indeed.

Meanwhile as seen at the top of the article, the Miami bombshell somehow was buried on Sportscenter behind a handful of baseball highlights. Yes…. baseball in August somehow got top billing over what looks to be the biggest scandal in collegiate athletics since SMU.

Currently the amount of real estate on ESPN.com still seems to be lacking given that we may very well be looking at a death penalty situation. Many took notice of the uninspired reaction ESPN showed to the story. 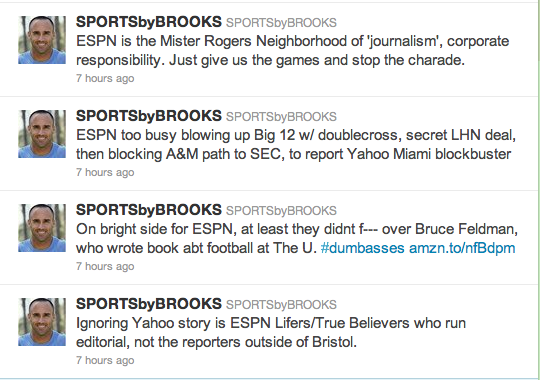 Chris Fowler (who all in all is a pretty stand up guy reputation wise) seemed a bit in disbelief of the potency and legitimacy of Yahoo’s report which rubbed a lot of folks the wrong way. 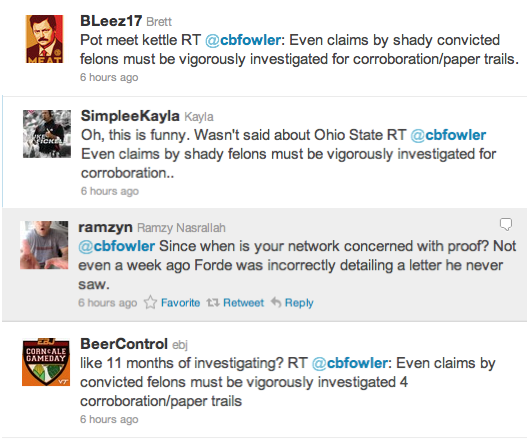 Traditional media’s lack of reaction to this story wasn’t just limited to ESPN. Below was a tweet mocking an editor at the Sporting News who apparently refused to read the story.

For a while The Sporting News has been clinging to the idea that they’re higher quality than other organizations but the amount of errors in their top 50 preview have done a lot to spoil that reputation (misspelling Pryor’s first name and citing a walk on third stringer is an impact player for example).

The only organization doing a worse job reacting to Miami’s pending doom is actually the University of Miami. In fact, despite posting a 12 minute clip of Al Golden’s reaction to the scandal, the official Miami tease for the Youtube video was as follows on their website:

“Al Golden speaks to the media before today’s practice. Head over to Training Camp Central for all Videos, Photos and Practice Reports”

“The University of Miami held its second practice of the day on Tuesday, getting in an hour of special teams work before lighting cut the session short. The practice was the second half of the team’s third two-a-day of camp.”

While ESPN and other traditional media outlets missed this story (yet produced a documentary glamorizing the same football program) and snoozed on getting caught up, I was impressed by Larry Brown who followed up by getting in touch with Chris Rix to get his reaction about the $5000 bounty to knock him out of games. I think it says a lot that while ESPN seems to be shell-shocked by this development, an independent blogger has already extended the original story.

Given ESPN and traditional media’s ties are more like handcuffs on investigating their content partners, it becomes clear the more significant role Yahoo and independent sites like LBS, SBB, Outkick The Coverage, AA, and hell even Deadspin play going forward.

With the Free Bruce Saga in fans’ rear view mirrors you begin to think about the litany of stories that have been broken by Yahoo and others and their lack of play in the traditional media world. Brett Favre, the Marlins’ financials, Bruce Feldman’s suspension, Reggie Bush’s house, and brewing stories at Oregon, Auburn, and Alabama, you begin to realize just how imperative the roles of investigative digital voices are these days given the lack of motivation and reporting wherewithal shown by mainstream media.

While ESPN didn’t do much to change our strong opinion about their lack of journalistic integrity,  it’s refreshing and inspiring to see Yahoo picking up the torch here.