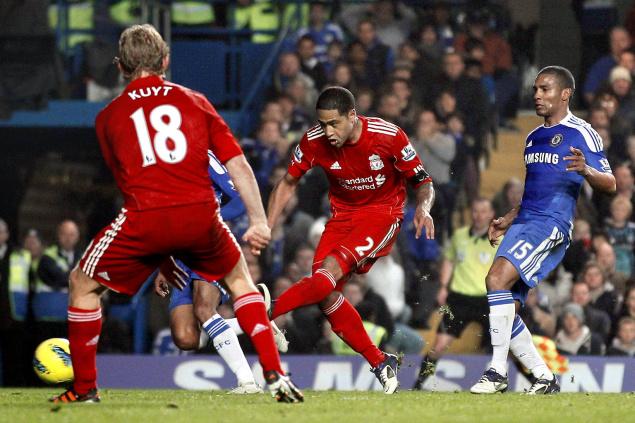 Back in August we told you of FOX’s plans to air tape-delayed English Premier League soccer matches on NFL Sundays.  Back then, we were cautiously optimistic that FOX was helping to finally usher in the permanent advancement of soccer as one of the top sports on American television.  And while the ratings from this weekend’s most recent Chelsea/Liverpool clash aren’t staggering, they are showing promising signs for the future of soccer on FOX broadcast television, especially when compared with the lack of ratings by America’s own MLS.  According to our friend John Ourand of SBJ, FOX has to be very happy with how their non-live soccer stacked up against stiff competition in the afternoon, including the NFL and NASCAR’s finale…

Admittedly, it’s very tough to see some big picture trends out of one isolated weekend of TV ratings, but why not give it a shot?  Obviously there are two points to take away from FOX’s rating.  One, the success of FOX’s tape-delayed EPL match versus the most important MLS match of the year on ESPN. Second is the growing confidence FOX must be gaining to push soccer alongside MMA as the next emerging television property in sports.  Let’s tackle each of these points in more detail…

(1) MLS was dealt a crippling blow by the EPL in the quest for ratings dominance in soccer.

-We as American sports fans are generally a very patriotic bunch.  However, as our TV options continue to grow with our shrinking world, American sports fans also want to watch the best in the world at any given sport.  This clearly presents a dichotomy when it comes to soccer on television. Do we, as American soccer fans, choose to back the domestic league with its lower standard in play and general lack of star power outside of New York and Los Angeles?  Or, do we choose to forgo our patriotic instincts and focus on the best soccer league in the world, the English Premier League.

Historically, despite ESPN’s “best” efforts, MLS has long been a ratings black hole.  EPL Talk has long done a fantastic job chronicling MLS’s struggles, especially since the advent of ESPN and FOX’s expanding EPL coverage.  Even with the star power of Landon Donovan and David Beckham in the MLS Cup Final on Sunday night, the best ESPN could do was a measly 0.8.  Of course, MLS was foolishly going up against Sunday Night Football on NBC, but still the sub-1.0 rating had to be disappointing even if it was up from last year’s final. The constant and tiresome Beckham worship by the usually sublime Ian Darke and the thankfully departing John Harkes on ESPN’s commentary quickly wore thin. That annoyance combined with a sloppy game and an impossibly hard to see silver ball must have made it easy for viewers to quickly tune out of MLS Cup 2011… trust me, I was one of them.

Meanwhile, FOX’s EPL broadcast this past Sunday almost doubled ESPN’s MLS Cup showing in spite of being tape delayed.  One could argue many reasons for FOX’s mild success.  I don’t buy the old cable vs broadcast argument as much these days with the ubiquity of ESPN across the country.  There’s something to say about having the NFL as a lead-in for FOX’s EPL soccer and the promotion of EPL games during FOX’s NFL braodcast also has to be valuable, compared with the barely-there existence of MLS promotion on ESPN.

But above all else, viewers are simply gravitating to the best soccer they can find.  Liverpool and Chelsea played a fantastic game with Liverpool beating Chelsea with under 5 minutes left for a dramatic win at Stamford Bridge.  And while FOX still has a long way to go in its presentation (they’ve even gone to the surprisingly insightful Piers Morgan to bring some notoriety), yesterday was a clear sign that viewers prefer their soccer imported.  This past Sunday proved once and for all that the English Premier League is the flagship soccer league on American television, period.

(2) There will never be a better opportunity for soccer to grow into a permanent force on sports television than the next six months.

–Look at the wreckage of sports ratings besides football.  Baseball ratings are down when the Yanks and Sawx aren’t involved.  Hockey is well behind thanks to their lockout, but trending upward slightly. NASCAR has fallen off a cliff in the ratings department.  According to Austin Karp, NASCAR only pulled in a 3.5 for their season finale on Sunday night despite a historically close championship battle between Carl Edwards and Tony Stewart.  NASCAR will never, EVER, experience a situation like Sunday night where Stewart and Edwards finished 1-2 in the final race and tied in the championship – yet their ratings barely increased from last year.  Poker has already seen its boom and UFC is going to struggle to hit the mainstream without a truly reliable champion to market. And most importantly, the NBA owners and players seem hellbent on mutual destruction leading to a season without basketball.

What better time is there for FOX to double down on the EPL?  Why not seize this opportunity and put the EPL on every week the rest of the season when they don’t have an NFL doubleheader.  Take the opportunity to show teams with American stars like Fulham (Clint Dempsey) and Everton (Tim Howard).  Build up a true EPL fanbase on network television so the live broadcast on Super Bowl Sunday can be a record soccer audience in this country.

The EPL season will continue into the spring after football season… why not experiment and move the 12:30 ET Saturday window to FOX from FOX Soccer?  Which would pull in a better Saturday rating in March – the NHL on NBC, college basketball on CBS, or live EPL on FOX?  If tape delayed coverage does well, why couldn’t live games on Saturday afternoons do better?  This could be soccer’s chance to break through the glass ceiling if FOX decides to go all-in with their EPL coverage.  A serious investment in the EPL by FOX could cement its place in the American sporting culture for years to come as one of the major sports on American television, if it’s not there already.