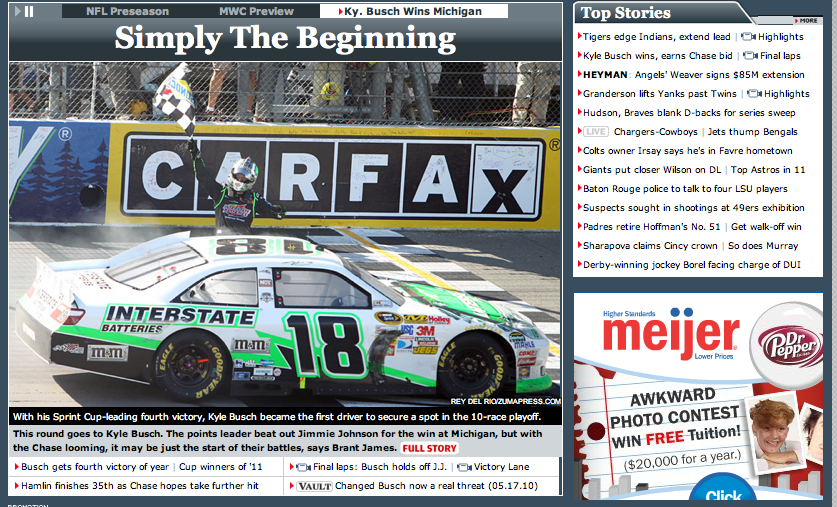 This weekend, some of the best basketball players on the planet all took the same court… and it had nothing to do with the NBA.  The Goodman League All-Stars defeated the Drew League All-Stars 135-134 in a game played in Washington DC.  The Drew (Los Angeles) and Goodman (DC) Leagues are two of the premier basketball leagues in the country and have been flooded with NBA players during the lockout.  On the floor for Saturday night’s Capital Punishment game was a who’s who of NBA stars – Kevin Durant (who led all scorers with 44 points), John Wall, Ty Lawson, Demarcus Cousins, Brandon Jennings, and James Harden just to name a few.  Kobe and LeBron have both made appearances in the Drew League this Summer as well.  With the success and hype for this weekend’s game, there is already talk of a second game happening soon in Los Angeles.  Here’s the highlights from DC…

Here are screenshots of the front pages of arguably the four major sports portals as of 10:45 PM ET Sunday night.  See if you notice a trend… 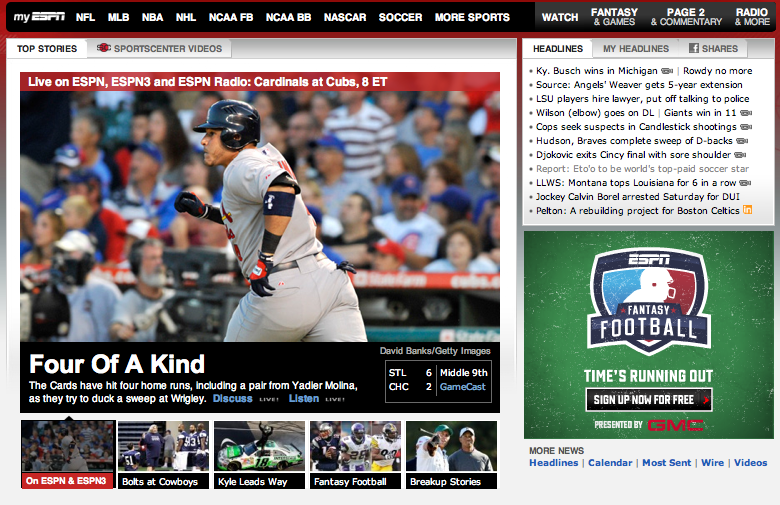 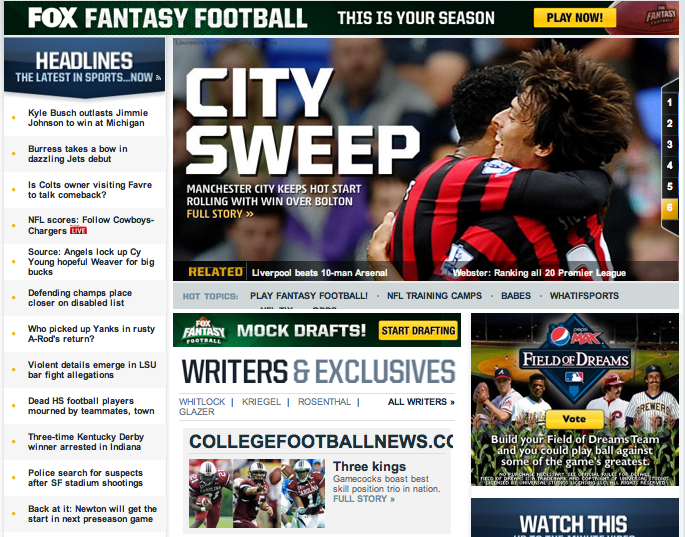 How many NBA stories did you find?  That’s right, none.  I realize it’s the normal offseason, football is right around the corner, and there’s this little lockout thing going on, but ZERO stories on the NBA, its players, or the lockout?!?  Reflect on where the NBA was a year ago, coming off the most interesting and heavily publicized offseason in the league’s history.  By almost all accounts, the 2010-2011 NBA season was the most successful year since Jordan.  Never has the league had so many young stars or interesting stories on which to count on.  Celtics-Lakers is a rivalry again, the Miami Heat has been the most talked about team in sports, and LeBron, Kobe, Dirk, Durant, Howard and others are megastars.  And yet, right now the NBA has as many headlines as curling, equestrian, jai alai, or darts.

And it’s not like the major media companies don’t have experience covering lockouts.  We just came out of a months long NFL lockout that was covered breathlessly.  Roger Goodell sneezed and it was BREAKING NEWS on SportsCenter.  DeMaurice Smith became a national celebrity.  The 18 game schedule, franchise tag, rookie wage scale, and millionaires vs billionaires was a part of our daily sports routine during the NFL lockout.  On the other hand, there is nothing but radio silence on the NBA front.  Ask yourself if you can even name the top NBA players involved in negotiations.  It’s ok, I’ll give you time to Google it.

I asked one of the most respected NBA bloggers on the web, John Karalis, about this topic.  John heads up the hugely successful Celtics blog Red’s Army and is also Lead Editor of Bloguin’s NBA blog Crossover Chronicles.  Check them both out.  Here’s what he had to say about the tumbleweeds blowing across Sheriff Stern’s NBA and whether or not basketball fans should be worried about the sounds of silence…

The NBA has disappeared for a few reasons.  1) This is typically the offseason anyway, and the casual fan doesn’t care TOO much about summer leagues and free agency unless there’s a megastar changing teams (like last summer).  2) Football is back after its own work stoppage.  And the NFL is so teflon, not even the stench of a lockout can stick to it.  Right now, fans are reacting to the NFL like it just came home from a tour of Afghanistan rather than a sport coming off a work stoppage.  And 3) Despite the NBA’s strides in popularity this past season, the league hasn’t had enough sustained popularity at this level to have people pining for its return.

I don’t know if it was a miscalculation on the owners’ part, but the league isn’t going out on a high note, here.  This is like reaching what you thought was the summit of a mountain, tossing your climbing gear off the side, and then turning around only to realize a cloud had been obscuring the rest.  And there’s a looooooong way to go, yet.  The sport is being put in its place right now.

And yes, I’m worried about the lack of news.  I’m worried because it means neither side is even trying.  The lockout is almost two months old and both sides have met once.  And that meeting was a farce.   These sides probably won’t meet again until September, and by then it will be too late to save any bit of the season.

I’m a loyal basketball fan.  I love the sport and I will be there to watch the NBA when it comes back.  I’d say that even if I wasn’t blogging about it for a living.  And as much as I’m a devoted freak of a fan, I’m horribly put off by this lack of progress.  And if people like me are put off by it, I can’t imagine how sane, rational fans feel.

It’s hard to care about the labor situation when you look at both sides and see that they clearly don’t want to move on anything.  I had been an optimist all along, but it’s become painfully clear to me that we’re going to lose at least some of the season.  What this lack of news most makes me afraid of is that the entire season will be wiped out.  And after the progress the NBA has made recently, it will be a horrible set back that will be looked upon as a failure of both sides to ride momentum when it was available.

As an NBA fan myself, it is downright depressing to see what is happening to the Association.  With everything going right for the league, David Stern is seemingly doing all he can to massacre every last drop of positivitiy associated with the NBA.  The great Finals, the Summer of 2010, all of it is being erased from our minds by Stern like some sort of human neuralizer.  Right now, optimisim isn’t just fleeting, it’s non-existent.  So while it is great to have the NFL back and on-field stories filling our news cycles once again, I’m going to pour one out for the NBA.

Read more of John’s great work on Bloguin and catch up on the latest news that does happen on the NBA and the lockout at Crossover Chronicles and follow John on Twitter.