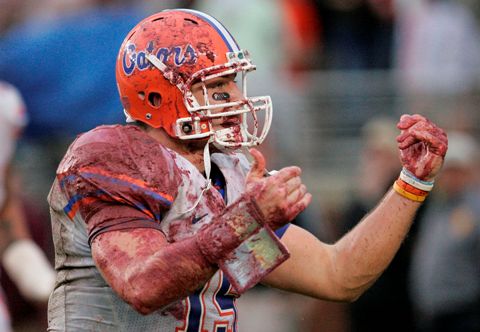 I’ve reached my breaking point.  I can’t take it any longer without saying something, finding some release from the hostile takeover of my life by Timothy Richard Tebow.  I simply cannot escape Tim Tebow.  Everywhere I turn, there he is – Tim Tebow.  On my television.  On my radio.  On my computer screen.  In my mind.  Haunting me like something out of Paranormal Activity.

A debate topic on ESPN in the morning.  A debate topic on ESPN in the afternoon.  A segment on Around the Horn.  On PTI.  On Numbers Never Lie.  On SportsNation.  Primetime.  The Blitz.  NFL Live.  A SportsCenter segment in the early evening.  A mention in the Monday Night Football game.  Another segment on SportsCenter in the evening.  A poll question.  A debate the next morning.  And the next evening.  And the next morning.

ESPN is by far the chief offender for TebowMania.  Yesterday morning, I could turn on any ESPN channel and there would be a greater than 80% chance it would be Tebow Time.  At times, Tebow was the topic of discussion on ESPN and ESPN2 at the same time.  You just had your choice of Merril Hoge dissing Tebow, or Skip Bayless endlessly praising him.  However, ESPN is far from the only offender.  Seemingly every media company and blog is talking Tebow.

I know what you’re thinking.  “Matt, aren’t you feeding TebowMania by writing about it?  Aren’t you just as guilty as the rest” To that I say… duh, of course.  But, I’m willing to sacrifice a small piece of my soul to at least present to you the big picture of what we have seen this week and to hope that we never have to experience this as sports fans again.  In order to defeat the beast, I must enter its lair.

No athlete has ever been talked about more in a short time span for doing less than Tim Tebow, Broncos quarterback.  The 24/7 sports media is to blame.  The impossible outcome of the Denver/Miami game is also a factor, perfectly arming his detractors and supporters to become further entrenched into their positions.  If I hear the words “elongated motion” or “intangibles” one more time I will eat fire.

It’s like living in a zombie universe, except all of the zombies are wearing Tim Tebow jerseys.  (By the way, this is the most nightmarish of all zombie universes in case you were wondering.)  Please Shaun of the Dead, give me some hope for survival…

Ahhh, killing zombies set to Queen gives me some level of comfort.  But then, I’m pulled back into the hideous, frightening reality of TebowMania and I realize that I only wish to be delivered from this deepest level of hell, and my imagined zombie universe is only a mental escape to paradise.

I want to briefly take you on a quick trip through the interwebs to discover all the mind-boggling ways one can talk about Tim Tebow.  Keep in mind, I’m not encouraging you to actually click on any of these links.  I’m only attempting to display to you that this Tebow phenomenon isn’t some sort of “white whale,” it’s real.  The following stories are merely grains of sand from the neverending beaches of Planet Tebow…

There’s Deadspin with no less than five articles mentioning Tebow (most mocking Tebow Time) since Sunday, including a roundtable, two threads, and a SportsCenter mashup of Tebow talk.

Grantland had an in-depth look at the most important play in sports history – Tebow’s two point conversion.

And our requisite factoid from Adam Schefter.

Again, the “work in progress” theme from Don Banks at SI.  I’m sensing a pattern.

You don’t think there would be a way Skip Bayless could make Monday Night’s Jags/Ravens game all about Tim Tebow would you?  No, that’d be silly…

The Big Lead already has his NFL career path laid out for Tebow.  Seems reasonable after 119 career passes.

Thank God someone (The Florida Times Union) had the prescience to use MONEYBALL to place Tebow in his proper context.

Those lucky enough to subscribe to ESPN Insider can finally discover how Tebow dissects the “winner” myth.

But don’t let that confuse you with ESPN’s AFC East blog entry on the myth AND legend of Tebow.

SBNation actually compared Tim Tebow to Detroit.  No, not Lions QB Matthew Stafford.  Not a football player or an athlete.  The city of Detroit.  Really.  They also proclaimed Tebow was an “American institution.”  In summary, Tim Tebow is a city AND America.  What a country.

The Huffington Post took the totally logical and reasonable route of treating Tebow maybe kissing DeMaryius Thomas as an international incident and wondered about his thoughts on gay marriage (gasp!) as someone associated with Focus on the Family (TRIPLE QUADRUPLE GASP, BATMAN!!!!).

The New Yorker talked about Tebow fever, because obviously nobody else was doing it.

On the front page of YouTube is a horrifying promoted feature video on SportsNation’s question of the week.  Unbelievably, in an upset worthy of Villanova over Georgetown, it’s about Tim Tebow.

Then there’s the single dumbest segment I’ve ever seen on a television.  And that includes an elephant competing against a horde of midgets.  Skip Bayless discussing a LeBron James tweet about Tim Tebow.  The FCC is bloody useless – WHY DON’T YOU DO SOMETHING ABOUT THIS!!

And, if that madness isn’t enough, there’s the moment where I finally saw the beginning of the end of America.  I’m convinced our downward spiral of a civilization began the moment Greg Gumbel ripped Hulk Hogan for ripping Tim Tebow.  That’s when America jumped the shark.  It happened to Rome too…

If you’re anything like me, you have the following reaction to that conglomerate of links…

I know TebowMania is driving me a little crazy (can you tell?), but the truth is I like Tebow.  That’s the unfortunate part of these last two weeks since he was named the starting QB in Denver.  I like his message.  I’ve bought in to his character.  I like that he stands for something.

I just want to see the kid play and to be given a chance to succeed or fail on his own merits.  I would love for nothing more than to hit the red button and pretend Tebow is Kevin Kolb for the rest of the season.

So please, no more talk about Tim Tebow’s “myth” or “legacy” or his “intangibles” or how he’s a “winner.”  Please, no more debates.  No more debates about the debates.  No more Skip Bayless bringing Tim Tebow into every conversation because he knows it pisses off viewers.  No more cute jokes from SportsCenter anchors about the level to which ESPN shoves Tim Tebow down the collective throat of America.  No more columns talking about Tebow’s pants, or his girlfriends, or his billboards.

Just let him be Tim Tebow.

If I could end in some way, with some plea of sanity to ESPN and the other members of the media and sports fans that read AA, it’s this – stop and reflect on the absurdity of covering Tim Tebow like he is Michael Jordan, Muhammad Ali, Tiger Woods, Brett Favre, and Ryan Leaf, Mike Tyson, and LeBron James wrapped into one.  He’s just a young NFL quarterback.  I don’t say this as a blogger that’s trying to get SEO hits by mentioning Tebow 1,000 times or as someone trying to be the smartest wiseass in the room.  I’m writing this just as someone that loves sports and cares enough to try and articulate my concerns with the way the sports media is heading towards obsession, sensationalism, and endless debate about nothingness with Tebow, LeBron James, and eventually other athletes down the road.

Simply put, the Tim Tebow obsession symbolizes everything that is wrong with the sports media.  When discussing Tim Tebow, there is little to no proper perspective, rationality, facts, or reason.  Bring it back before it becomes the rule instead of the exception and the way we look at sports is irrevocably changed.