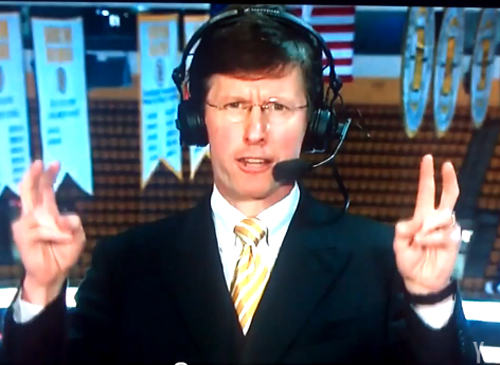 It’s been easy to be distracted here at AA in the past week, what with Gus Johnson dominating our lives by announcing his move to FOX.  In fact, I hear some on the AA staff haven’t even been able to sleep at nights without the thought of Gus announcing March Madness buzzer beaters.  But, with every end there is a new beginning, and perhaps that new beginning is rising AA star Crazy Jack Edwards.
We’ve brought you some of Crazy Jack’s finer moments recently as HIS Boston Bruins make their postseason run.  Well, Bruins fans and fans of insane announcers can rejoice, because Edwards has signed an undisclosed contract extension with NESN to continue his play-by-play role with the team.  I for one am overjoyed!  Can you imagine how many more impromptu history lessons or riffs on pop culture are in store for us in the future?  Somehow Crazy Jack Edwards combines the historical knowledge of a studious scholar with the cultural awareness of Bill Simmons (except every reference doesn’t relate to Teen Wolf or The Wire).
How will Crazy Jack Edwards be able to relate those meaningful shootout wins for the Bruins next year to the midnight ride of Paul Revere?  If Detroit meets Boston in the Stanley Cup Finals will Crazy Jack regale us with stories of the Model T and Eminem?  I’d argue that Crazy Jack actually deserves his own History Channel show in the offseason!  Can you imagine the limitless possibilities to educate viewers through seemingly unrelated hockey games?  Hey, if guys like this can be considered “modern-day historians” what do we have to lose?
[Fang’s Bites]