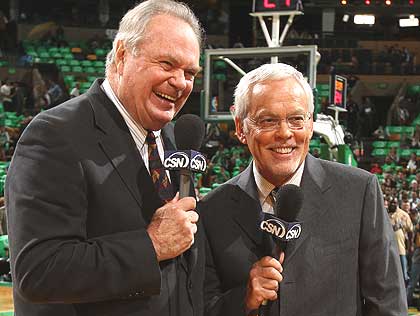 Yesterday, I had the opportunity to speak with Boston Celtics play by play man Mike Gorman.  Mike is one half of the longest running announcing duo in televised sports with Celtics Hall of Famer Tommy Heinsohn.  In fact, the pair are being honored before tonight’s home game against the Pacers with a ceremony commemorating their 30 years together in the booth on “Mike & Tommy Night” at the Garden.  Mike is one of the best play by play men in the NBA and in all of pro sports and has covered many events in his career including Celtics basketball, the NCAA Tournament, and the Olympics.  In this interview, Mike talks with Awful Announcing about his longstanding partnership with Tommy Heinsohn, how he broke into broadcasting, being the voice of the Celtics for 30 years, and just how much longer he and Tommy plan on staying behind the mics.

Q: Why were you interested in being a sportscaster and how did you get your break with the Celtics?

A: I wasn’t sure what I was going to do when I got out of college.  I was in the Navy for 5 years and when I got out of the Navy, I still wasn’t sure what to do.  I always flirted with the idea of being a sports announcer.  I ended up getting a job in New Bedford changing tapes and eventually worked my way onto the AM side and started with high school sports.  I went out and started doing high school baseball, basketball, golf, you name it we did it.

Somebody heard me in Providence and called me up one morning and asked if I wanted to be a stringer on their morning news.  I started doing some sportscasting because they didn’t have a sportscaster and eventually moved over to WPRO radio and said to the general manager, “we should do sports.”  He said, “if you can sell them, we’ll do them.”  We went out and we started doing URI basketball and that was my first chance to do a Division I college basketball team on the radio…  then the television station in Providence had a weekend anchor job open and I got it, and they had a contract to do 5 Providence College games a year on TV.

I was there about 2 months and ended up getting the Monday-Friday job and with that got the play by play of Providence College basketball on television, and that’s where Tommy Heinsohn and I first worked together…  Prism was one of the first regional pay telecast groups and they opened up a Prism New England and got the rights to the Celtics home games.  They hired Tommy to be the color guy and asked him who do you think should be the play by play guy and he’s like, “I got this guy down in Providence I think you’d like.”  I got the job.

Q: What does it mean to you and Tommy to be the voices of the Celtics for the last 30 years and have such a special relationship with Celtics fans?

A: It’s very flattering more than anything else.  That’s a long time for people to accept you.  The first 15 years that I did the job I only did the home games… how could you not like me and Tommy?  The Celts won every single time we were on the air!  Their home record in the 80’s was unbelievable.  I learned early on in my career, if you broadcast a really good team, you have to work to screw it up.  I was very fortunate – Larry Bird and I started the same year.  How’s that for good luck on my part?

Q: How would you describe the style of broadcast that you and Tommy put together?

A: (Laughs)… here’s the thing, this is a true story.  The very first Celtic game I did with Tommy, I reach into this briefcasey thing I’m carrying with me and I pull out this sheet where I’ve got the rosters of both sides.  I’ve got names, I’ve got numbers, scoring averages, little one and two word clues, anecdotal stories to tell about all these guys, history, where they went to college, how many people they got in their family – you name it, I got it written on that little sheet.

Tommy looks at that and says to me, “what’s that?”  And I said, “that’s the stuff I’m going to use during the game.”  And he reaches over, he turns the thing upside down and says, “we’re not going to need that.”  And we haven’t for 30 years…

(On his broadcast partner Tommy Heinsohn)

You talk about unique, 8 championships as a player, 2 as a coach, another 30 years as a broadcaster all with the same franchise.  It’s a remarkable career.  Tommy’s life has been basketball… he was an outstanding coach, and should be in the Hall of Fame as a coach actually as well as a player.  Tommy wanted to just do the game as it took place in front of him – to sit down, let the game happen, and react to what you see.  And that really has been how we’ve done it for 30 years and fortunately for us, it’s worked.

Q: You and Tommy seem to have so much fun as a broadcasting team, do you think that’s one of the keys to your longevity and success together?

A: If it isn’t #1, it’s #2.  You don’t really want to try to be funny, because if you try to be funny, you’re usually not.  But, we’ve just tried to keep it light.  It’s very important for us that we are able to make people laugh.  If you commit to a game, you’re committing two and a half hours to somebody, they can at least make you laugh a couple of times.  I used to love working with Bill Raftery because we had the same type of relationship on Big Monday when we did those for ESPN.  We thought it was important that at least once or twice every half you had a good laugh.

Q: Do you have a most memorable moment in the booth or a favorite game that you’ve had the opportunity to announce?

A: Not in the traditional sense.  I’ve done some terrific games.  I had the chance to do the NCAA game where Santa Clara beat Arizona.  Steve Nash was a freshman point guard at Santa Clara and it was a wonderful basketball game.  I did some NCAA Tournament games involving Coppin State believe it or not, which was as thrilling as any game I’ve ever done.  They were fun to watch – they ran, they shot, they were loose as a goose, their coach was a riot, they were a great bunch…  I don’t really have a favorite moment.  My last favorite moment was a couple of nights ago, even though we were losing, in Newark.  Tommy taught me that.  The games are right now and you live in the present.

Q: How does this current era of success with the Celtics compare to the days of Bird, McHale, and Parrish from your perspective in the booth?  Is there a similar energy to the games or has it changed as the game has changed over the years?

A: I could give you a lot of answers to that.  In terms of the crowd, the 80’s and now are very similar to each other.  The place rocks during the playoffs, the building literally shakes.  That is the same, but for me it’s quite different.  I did the Celtic home games for the first 15 years of doing this and I would go to the Garden, go to the press room and see Tommy, get something to eat, we’d usually go downstairs and talk to Red in his office for a couple minutes, and then we’d go up to the balcony where our broadcast position was.  We would do the game and then a postgame show and we’d leave.  I would often go a week or two where I wouldn’t go near the locker room or have any dealings at all with players.

That’s where you really bond with players and develop relationships, when you’re on the road with players.  I’m much, much closer to this team.  That championship in 2008 touched my heart much more than the ones I was involved with in the 80’s because I felt a certain distance from those guys.

I had a front row seat for all that weight-carrying, it was very touching (when Pierce lifted the trophy).  Because of my previous relationship with the Big East, I met Ray when he was a freshman at UConn and did all of his important games for three years.  There’s a closeness that I have with these guys that I didn’t have with Larry, Kevin, and Chief.  I know Danny Ainge much better now in my dealings with him as head of basketball operations than I ever knew Danny as a player even though I did all the home games of his career in Boston.

Q: Are there ever any days when you take a step back and reflect on being the voice of the Celtics for 30 years?

A: Somebody said to me over the course of this year-long celebration, let’s assume that as a kid you are 8 or 9 years old before you have the first solid memories of the team you root for.  He looked at me and said, “you’ve got to understand that nobody under the age of 40 knows any voice but yours with the Celtics.”  That kind of blew my mind.  I had never really thought of it that way.  I’ve been very lucky in my broadcasting career.  I had a chance to work for ESPN, CBS, NBC, I’ve been at the Olympics in Barcelona, NCAA Tournament games, and some of the Big Monday games that Raft and I had were just classic basketball games at a time when the Big East was in its heyday.  But what I always wanted to be was somebody’s play by play guy and to have that somebody turn out to be the Celtics, that’s really cool.

Q: So you and Tommy have 30 more years left in you, right?

A: No, maybe 8 or 10.  Tommy said to me the other day, we were talking about this ceremony thing we’ve gotta do at the Garden, he looked and me and said, “they understand we’re not going anywhere, don’t they?”

Special thanks to a very gracious Mike Gorman and the folks at CSN New England.  It was a real pleasure to chat with Mike.  Even if you aren’t a Celtics or an NBA fan, check out the special on Mike and Tommy’s 30 years in the booth on CSN New England premiering Friday night.  As announcers, they mean more to their franchise and their fans than any in professional sports.