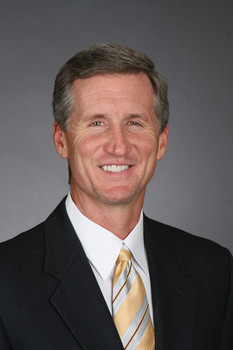 Mike Breen has been the voice of the NBA Finals on ABC since 2006 and is currently ESPN’s number one play by play man for the NBA.  Besides his work for ESPN, he is also the central play by play man for the Knicks on the MSG Network and has also announced basketball in several Olympic Games for NBC.  He’s called some of the most memorable NBA games in recent years including the 2002 Celtics comeback against the Nets, Malice in the Palace, 2008 Celtics/Lakers, and of course, last night’s thrilling Mavericks comeback in Miami.  Mike is one of the top play by play announcers in sports, but also has a humorous side that may surprise viewers.  In this interview with AA, Mike talks about last night’s game, these NBA Finals, working with Mark Jackson and Jeff Van Gundy, and Bill… from White Plains.

Q: Our traditional first question is how you got your start in the business, what got you interested in sports broadcasting, and how you got to announcing the Finals on ABC?

A: Like a lot of kids, I had a love of sports.  I grew up in a family of 6 boys and it was sports 24/7.  I quickly knew I wasn’t going to be good enough to play at the next level and wanted to find a way somehow to stay involved.  I went to college specifically for sports broadcasting.  I went to Fordham and they have a top notch student radio station, I broadcasted men’s and women’s basketball and baseball and hosted a talk show.  Right away I caught the bug.  After I graduated I took a typical small market route working at tiny radio stations in Poughkeepsie, NY, did Marist College basketball when Rik Smits was there… a few years later I was fortunate to get the pre and postgame radio job for the Knicks and that was my first venture into the NBA.

Q: I remember the first time I saw you on national television was actually as the sports reporter on Imus in the Morning and how funny you were.  I didn’t know until today that you were actually Bill from White Plains.

A: (Laughs)  I’ve never actually officially confirmed that.  Every once in a while I’ll still meet somebody who will say I used to listen to you on Imus, and they’ll say “did you ever meet that guy Bill from White Plains who used to call in,” and I can’t break their hearts so I always say, “yea I never met him but he seems like a good guy.”  So there are some people that actually believe it was a different person.

Q: How much of your personality and humor is brought into your announcing?

Q: How has the chemistry of that booth developed and what are some of your challenges working in a 3 man booth?

A: Matt, it started 20 years ago when I first started broadcasting Knick games on the radio.  Jeff was an assistant coach and Mark was a player, so we’ve known each other for 20 years and quite honestly we’ve grown up in the NBA together.  Very early on we knew each other, we were all around the same age, and I learned so much about the NBA game from Jeff when he was the head coach and Mark obviously played for him.  The familiarity and knowing the guys for so long has made a difference.  To me, the coolest part is the dynamic between Jeff and Mark.  To have two analysts in the same booth and one guy coached the other guy, I find that really interesting.  Because we’ve been good friends for so long we can pretty much say anything, even if it’s completely disagreeing with what the other guy said, nobody’s feelings get hurt and that’s a real fun part of it.

Q: So you guys won’t be appearing in the ESPN book paperback with some comments about each other?

A: Fortunately none of us are in that book. (Laughs)  I think it came before we got there.

Q: What’s it like to be the play by play man for the Finals?

A: It sounds corny, but it’s a dream come true.  I always pinch myself before Game 1 every year because I can’t believe I get this opportunity.  Ever since I was a little kid I’ve loved basketball.  I really do feel blessed because for me it’s a privilege to be able to call these games.

Q: Last night’s game was one of the most improbable comebacks in Finals history.  When you’re announcing a game like that, is there a point where you look to Jeff and Mark and say to yourselves, wow this is one of those games that will be remembered for a long time?

A: During the game, because you have so much to concern yourself with, you don’t really think that much.  After the game, you think that may be one of the all-time games.  During the game you’re so focused on making sure you document everything the right way, but at the same time you have to put into perspective where this game stands.  We knew it was pretty special because it really seemed like it was over.  Miami was dominant in that stretch from it being a close game to all of a sudden they’re up 15, all the momentum was gone, Dallas’ body language wasn’t right, and it was like the flip of a switch how incredible it happened.  It happened so quickly, they cut off 7 points in like a minute and a half.  You’re thinking oh wow, they did that quickly.  It was stunning from the standpoint of how dominant Miami was when the comeback began…

Q: You’ve had quite the history with these comebacks with Celtics/Nets, Celtics/Lakers, and now last night…

A: Yea and we had the OKC/Dallas game earlier this year.  When you’re doing these games, you realize that it really is never over, especially in the Playoffs when there’s still so much to play for.  If that’s a regular season game, Dallas might pack that one in.  But in a playoff game, and especially in the Finals, you can never stop playing.  I thought Miami, when they were up 15 lost their edge a little bit and Dallas just jumped all over them.

Q: Does one of those comeback games stand out in your broadcast career?

A: That Celtics/Nets game I remember fondly because I had just started doing big playoff games for NBC and it was another game where Boston looked dead in the water.  For me it’s hard to rate them.  When it’s a Finals game, it means a little bit more.  That Celtic comeback in LA against the Lakers was special although that comeback started in the first half.  I guess the irony is here’s Dallas coming back against Miami to maybe save the series much like Miami came back against Dallas in ’06 to save their series.

Q: And that’s what is making these Finals so compelling with all the stories – Dirk v LeBron, the Big 3 in Miami, last night’s comeback, and even 2006.  When you come together as a crew, is there one story that you’ll focus on, or will you weave them all in to the broadcast?

A: I think you have to let the games dictate that.  You can’t really go in ahead of time with what you want the story to be, but there’s no question the Dirk/LeBron story is the lead right now.  For Nowitzki, who’s such a great player and plays with such great humility – he’s so desperate to win that championship.  And then you have LeBron, who has all his critics this year and another guy who has all the individual accolades, but he’s missing one thing.  For those two great players that have everything but a championship, to me that’s the top storyline right now.

Q: What will go into your preparation for Game 3 if you can take us behind the scenes a little bit?

A: Well, tomorrow we’ll meet with a couple of the Dallas players and coaches and then the Heat players and coaches and see where Miami’s psyche is right now… Dallas it’s amazing.  They’re even keel, the same after wins as they are after losses.  They’ve been through so many big playoff series, they know you can’t overreact to one win or one loss.  You get a feel on that, go through a lot of statistics and see what trends are developing, then you take a look back at Game 2.  For Dallas, they won the game in spite of the fact their turnovers were terrible.  You just try to talk to as many people as possible, look through statistics, banter back and forth over dinner, and see what you can come up with.

Q: Is there anything out there in broadcasting you’d like to do that you haven’t yet.  Maybe the Spelling Bee someday?

A: (Laughs) You know here’s two things I would love to do.  I’ve never done an NCAA Tournament game and I love the NCAA Tournament.  The other thing is I’m a crazy Met fan, so some day I’d love to announce a Met game on the radio.

Q: Any chance of going back to your radio days and hearing more from Bill from White Plains?

A: Bill from White Plains still makes an occasional appearance.  He was actually on a couple weeks ago.  Bill left a call and wished Charles McCord the best on his last day.  He still lives, somewhere out there…