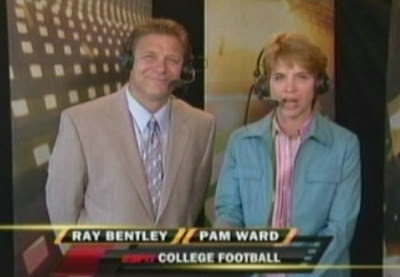 Awful Announcing in the past and now, present, have made no secret that we do not like the cut of Pam Ward’s jib when it comes to sports announcing. In a twist Shyamalan would be proud of, Pam Ward, the longtime voice of mediocre Big Ten football, has aspirations of calling NFL games. As a diehard fan of one of those mediocre Big Ten teams (Michigan State), I have felt the wrath of Ward far too often. Nothing is a bigger buzzkill than hearing her baritone voice during the introduction of your game. For those of you who are not a fan of a mediocre Big Ten team, 1) congratulations and 2) this feeling is probably foreign to you. I’d equate it to going to a party and your friend picked up the booze. Only your friend picked up Popov and no chaser. You can still have a good time with that, but some minor miracles will have to happen to overcome that almost critical error. That’s what a Pam Ward broadcast feels like.

Pam has worked very hard to be the focal point on Mount Awful Announcing. She has earned it. Stilll, I do not believe we will hear Ward calling an NFL game anytime soon…especially because she was just demoted to the minor leagues (ESPN U). So, it would appear Mike Tirico can sleep easy knowing that Pammer’s is not coming for his gig anytime soon. Still, her feelings are known, and we fans of mediocre NFL teams (Detroit Lions!) might have the terror of Pam Ward calling one of our games on a Sunday. For that, an NFL work stoppage next season just might not be the worst thing of ever.

View all posts by Brady Green