Much has been said about Matt Millen since he stepped down from the Lions to pursue other opportunities, was fired for committing seppuku to the Lions during his tenure as president of the organization. You’d think that a guy ran out of town for egregious missteps running a football team would have a bit of tough time finding a new gig, but inexplicably he now is one of the most distributed sports personalities covering football.

It started with NBC who brought him for some playoff coverage which didn’t go over well with bitter Detroit fans. The NFL Network was next up to the plate locking down Millen as their main color guy for Thursday Night Football where in a limited amount of games, he has continued to baffle football fans with asinine comments including the praising of Rod Marinelli as one of the best coaches in the NFL. 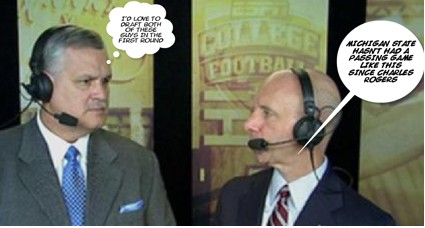 Fast forward less than 48 hours later and you’ll likely find Millen doing a marquee college football game . We’re not talking cable here, but full blown network ABC and usually a nationally televised game. Worse yet, his assignments have been mostly in the Big Ten (Millen played at Penn State), meaning the very fans that ran him out of town are subjected to three hours of “The Franchise Destroyer” waxing poetic on a sport he really hasn’t covered or been involved with or 3 decades. The results have not been encouraging.

Per his own Wikipedia page

On October 9th, 2010, Matt Millen was the color commentator for the NCAA football rivalry game between the University of Michigan and Michigan State University. Due to Millen’s history with the Detroit Lions, he is a very disliked figure in the state of Michigan. There was an outrage against Millen commentating this game, and complaints were sent to ABC/ESPN, on which the game was to be broadcast.

But the pain doesn’t stop there. Again 48 hours later Millen returns this time on ESPN along with Steve Young and Stuart Scott. Did I ever tell you the one about the Mormon, moron, and cross eyed guy? Again its been tough going for Millen thus far including drawing the ire of the blogosphere for berating Steve Young.  (click read more for more Millen bashing) 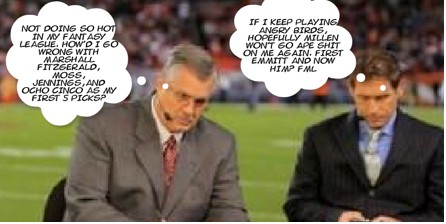 To be honest, I don’t think Millen is as bad as advertised. With his NFL Network coverage he just blends in with Bob Papa and Joe Theismann which makes for one of the worst broadcast teams covering the NFL. With ESPN broadcasting 20-30 college games a week, Millen is actually somewhere on the fringe of the top ten color guys they have for college football. The problem is that you put him on Big Ten coverage and the state of Michigan is going to cry foul. He shouldn’t really be given a marquee game either, as Millen is already spread thin covering the NFL so you’re asking him to cover a sport he’s really not well versed in. No way he can go to practices and do the pre production meetings with coaches and players if he’s somewhere else late Thursday night and the game is early Saturday.

As for Monday Night Countdown, I should probably change the channel. NFL pre game shows all suck but I mean what else is on at 4pm on the West Coast? Millen has been pretty awful here as well.

Millen does suck. There is no arguing that. The real pain is that for many of us, we’re subjected to 8-9 hours of him sucking in a 5 day period. That’s just too much and a little baffling considering he sucked in the NFL, nobody really likes him, yet the geniuses at ESPN, NFL Network, and formally NBC are trying hard to get him to join George Clooney in the 10 million miles club. And while we’re on the subject, it’s kind of crazy Millen even wants to have jobs that take him to 3 cities in 5 days. If he spends his time at home Tuesday-Wednesday you’d be looking at 4 cities a week.

How we have an oversupply of Millen and a shortage of Gus Johnson is mind boggling. Luckily for you, I present you with some cool bar charts to outline this injustice.

Hat tip to Detroit for taking this grenade for America for almost a decade. I don’t have an MBA yet, but this doesn’t look right. 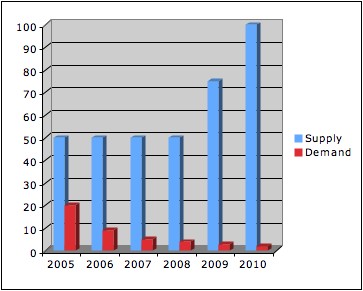 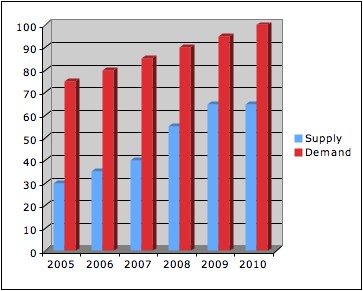