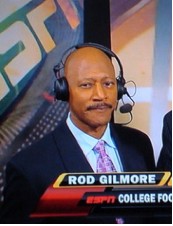 Well this one slipped under the radar and probably because only Time Warner and Bright House Cable are offering the channel, but ESPN has launched yet another channel with ESPN Goal Line.

Hosted by Anish Shroff along with analyst Rod Gilmore, the show mimics the highly successful Red Zone Channel and NFL Red Zone depending on what cable/satellite provider you have. With typically over 15+ games occurring at any given time during the day and usually a handful of games of games overlapping in the early evening slots, ESPN Goal Line bounces around giving you live looks at some of the more exciting action going on. For those who can’t put a face to the name with Shroff and Gilmore, here is who could be in your living room for 8+ hours on a fall Saturday. We’ve sized the photos to be proportionally equal to how much they’re projected to talk during a broadcast. 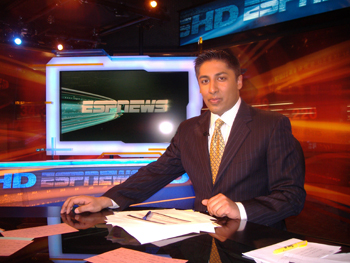 Some things to note include that ESPN Goal Line only allows you look-ins of games that ESPN holds the distribution rights to. With this in mind about 40% of the games will be unavailable to be showcased on the channel with Fox Sports affiliates, Versus, CBS, Big Ten Network, and NBC holding rights to a good chunks of Saturday’s action.

Click read more to find if you get this channel and what to expect.

The other key thing to note is that even if you have Time Warner or Bright House,  ESPN Goal Line is not part of the basic channel package but rather the sports tier package. For those unfamiliar with this offering, it typically includes additional sports channels like the Golf Channel, various Fox Sports and Comcast Sports Net Affiliates (blacked out when they have professional games), league channels like BTN, NFL Network, MLB Network, NHL Network, along with more niche channels like Speed, Fox Sports Soccer, and the quin essential Pursuit channel which chronicles the exciting world of hunting and fishing.

One thing that sticks out is that this channel is that it seems to be another competitor to ESPN Game Plan which has diminished in significance in value over the years. There was a day and age where ESPN Game Plan was a must for college football fans but over the years more marquee games have become available through regional affiliates, ESPN U, Big Ten Network, Versus, and overflow ESPN feeds provided by cable and satellite providers.

It will be interesting to see how successful of a rookie campaign the channel has. Limited distribution along with a limited pool of games they can show may keep the channel as an afterthought to college football fans. You also have to think that a lot of the NFL Red Zone Channel’s success stems from fantasy football diehards trying to keep pace with all the day’s scoring where college football doesn’t have a significant fantasy football base to tap into.

One other interesting note surrounding the unveiling of the channel is that it looks like ESPN is planning a similar effort for college basketball called ESPN Buzzer Beater.

Its not known if Buzzer Beater will only roll out to Bright House and Time Warner or if other providers will add that channel along with ESPN Goal Line. Its definitely a positive sign though that Goal Line is a HD channel as college football fans have bemoaned the more expensive and inclusive ESPN Game Plan not being in HD.

The success of the NFL Red Zone Channel is unquestioned so it was a matter of time until another sport tried to get in on the action. Has the average sports fan attention span shortened in a day and age where we’re focused on highlights, big plays, and momentum changing moments?

ESPN jumps from game to game in their NBA coverage on ESPN Fast Break Tuesday and MLB Network has a similar format on MLB Tonight. Those aren’t additional channels like Goal Line or RZC, but it certainly seems we’re moving in a direction where channel flipping game to game is becoming the responsibility of the broadcaster opposed to the hyper active fan. Frankly game flipping and multiple big tv’s are huge selling points on my EHarmony profile, but I guess I can deal with someone trying to make my life a bit easier for now.

Being a DirectTV guy myself, I’d love to hear from people in the comments their thoughts on the channel if they’ve checked it out in the first 2 weeks of the season.