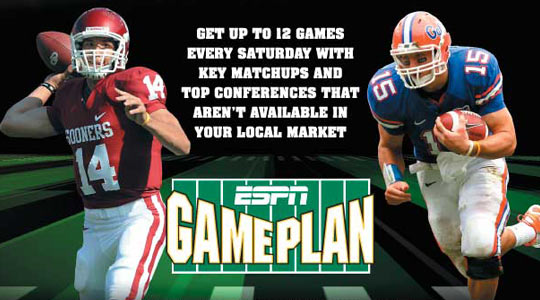 While DirectTV’s NFL Sunday Ticket has played a large role in allowing fans to enjoy their favorite sport, there continues to be one major hindrance for those football fans who prefer their home base for watching football. Sadly ESPN’s Gameplan college football package is again not available in HD for any carrier. Yes I am being serious. In a day and age where we’re apparently watching sports in 3D glasses, some of the biggest football games of the year will not be shown in HD for many out of area fans although these games are being broadcasted in HD elsewhere.

The explanation of this has been murky at best with lots of message board chatter about the egregious issue. Ask your satellite and cable provider and they’ll tell you they don’t have the contractual rights to air those games in HD. While that’s largely true, in some cases (especially DirecTV) they do have a HD feed for viewers in that area and viewers in such rural areas that they don’t have local broadcast affiliates.

Essentially your provider is handcuffed contractually to not have HD feeds of additional games that ESPN Gameplan gives you. The end result is west coast fans not getting games like Ohio State vs. Penn State in HD or fans in the Midwest getting Texas vs. Nebraska in standard definition like in year’s past.

Seems ridiculous given all the NBA, NFL, March Madness, MLB, and NHL packages all are available in HD.

For HD addicts who have some cash to throw around, your provider may give you the option to pay about $30 to watch a particular game as a PPV option, but even for more affluent college football fans it’s essentially a walk of shame.

This year though there were rumblings that DirectTV was making a push to arrange having the games in HD. In fact, apparently they got so far in the process, that people who bought the package actually got billing confirmation that the package had HD (crappy sceenshot below.) 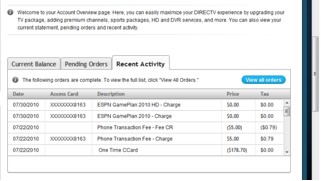 Unfortunately, though, whatever effort was made didn’t materialize and college football fans will again be out of luck, having to watch stretched out SD, which can be a bit rough on the eyes.

The explanation that seems to have the most credibility is that ESPN is holding the HD back looking to protect lower end cable providers from being at a disadvantage.

“My understanding is that DirecTV would be willing to offer it in HD if they were allowed to — but that ESPN doesn’t want to upset cable companies (many of which lack the bandwidth to do Gameplan HD) by letting them do so.”

Essentially ESPN owns the rights to the games and feeds and believes that a lot of cable providers don’t have the bandwidth to add 3-5 additonal HD channels as needed. Because of this, they’ve opted to not let anyone have the HD channels, as giving some providers this advantage would potentially hurt relationships with providers who could not. Those providers could just say “we’re not going to sell your package” or even worse “we’re going to fight you tooth and nail when your current contract is up on how much we pay you for ESPN”. Another bargaining chip these providers have is that many carry ESPN U, ESPN Classic, ESPN News, and have broadband distribution rights for ESPN3.com.

These are key ESPN channels that are still fighting their way onto people’s basic packages and its likely ESPN would rather swallow their pride on the HD Gameplan issue opposed to eroding goodwill with partners who hold some amount of leverage with them on strategic distribution issues.

Regardless it sucks especially for displaced fans who can’t watch their team in HD. With the rumblings about DirectTV making some progress here, let’s hope this is the last year consumers are left without the option.