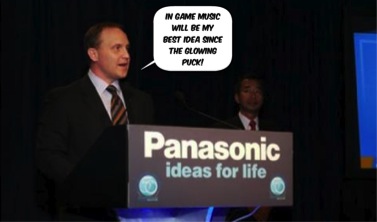 Eric Shanks is not an announcer but at first glance, he sure is an idiot. Who is he? He’s the newly crowned president of Fox Sports and the guy driving the idea of putting weird Michael Bay movie like dramatic music  randomly into Fox’s broadcast of football games. If you haven’t seen this yet, check out the video below:

So why rehash this now? Well, despite the cold reaction of thousands of fans, it has been reported that Shanks will keep experimenting with the in-game music. There is even speculation you may be seeing it in the Super Bowl.

“Just like music in movies, you have to use it at the right times. And imagine trying to score a movie the first time you’re seeing it.” Plus, he says, announcers during last week’s test game needed to get their groove on “to get a feel whether to keep talking or let the music build the suspense or drama for the next play.”

The guy who does the music for CSI, James Cardoni, has been enlisted to make the dramatic music and has already provided 15 cuts for Fox to play. If you’ve seen Forgetting Sarah Marshall, feel free to snicker at just how stupid all this is. Join us after the jump (hit read more) for more head scratching.
This is just an idea that needs to be put down and unfortunately it looks like Shanks’ head is in the sand on this one and a lot of Yes Men are not willing to speak up on it. It’s not just our opinion here at AA that this is ridiculous, but if you take a gander at the 77 comments on PFT’s article about the music, you’ll see 77 comments of pure venom directed at the concept. It’s not just the web, either.

Twice this week, I’ve been driving around listening to Sports Talk Radio when the topic came up (both times callers told the hosts to check out Awful Announcing to see the clip). Each time it started with just one caller broaching the subject, stirring a frenzy of other callers to rant on the subject.  Find me someone besides Hans Zimmer, Michael Bay, and the Scott brothers (Tony and Ridley), who thinks this is a good idea.

It’s not that we hate music. I mean, ESPN plays music during highlights as do CBS, NBC, and Fox. HBO, Showtime, and NFL Films are some of the best production wise in mixing music in with Inside the NFL, 24/7, or NFL Films Presents.

Even in-game music is okay, given you’re at the game as marching bands and stadium music are fun ways to keep fans excited in between plays. But on television it’s just a horrible fit. Worst decision since Limbaugh’s brief stint on ESPN.

That’s what announcers are for. To fill the time, to break down the game, and provide me info while adding context and emotion to the game. I know Fox’s announcing lineup is pretty weak right now, weak enough where Torry Holt was brought in for a tryout and butchered a game in a fashion that only Boom goes the Dynamite guy may understand.

It may have seemed like a good idea to Shanks and Fox, but it’s just not working and it should be put to bed. My strong advice to Shanks is to use focus groups before putting a new novel concept in front of millions. This is the guy who also was part of the team who brought the glowing puck to Fox’s coverage of hockey. You think somewhere along his rise to President of Fox Sports, the concept of a focus group would have been introduced to Fox or Shanks

At the same token, Shanks has also played a role in the first down yellow line technology and also introduced some nice production changes to Fox this year such as an updated playclock countdown and the in-game check-ins with Mike Pereira.

All that said if the in-game music makes its way to the Super Bowl, it’s going to be a HUGE PR nightmare for Fox as close to a hundred million people will witness the ongoing disaster. Given Fox is still reeling after the disaster of procuring the BCS rights for 3 years where the ratings plummeted and the production was universally panned, it will be interesting to see if they pump the breaks on this one.

Shanks was brought in to revitalize Fox Sports who has seen itself decline as CBS, ESPN/ABC, NBC, Versus, and Turner Sports have all added programming and increased viewership. Fox has been stuck with just MLB and NFL for quite awhile and their production and on air talent has taken a lot of criticism over the years. 2011 serves as a huge year for Fox and Shanks as multiple television rights are coming up for bid. Might be wise to spend more time looking to gain distribution rights for key properties rather than ruining what you already have.