This year’s Butler vs. Duke National Title Game was one of the NCAA’s highest watched championship games ever and will be one of the most watched sporting events this year reaching nearly 50 million viewers in the US.

For play by play announcer, Jim Nantz, it was just another bullet point in an illustrious 20 year career leading NCAA Tournament coverage for CBS. But for Clark Kellogg, in just his second year as CBS’s lead color commentator, the classic title game was a jumping off point for a very exciting offseason. 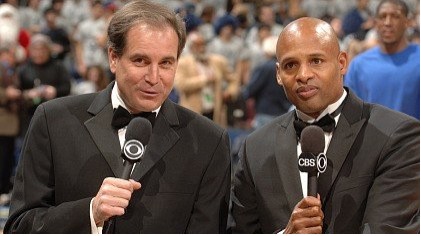 In addition to losing (maybe intentionally) to President Obama in a game of HORSE/POTUS, Kellogg received some clarity about his future as CBS partnered with Turner Sports to successfully outbid ESPN and others to retain the rights to the to the NCAA Tournament.

In June, Kellogg who also serves as a commentator for the Pacers, would add a executive role with team as VP of Player Relations.  To round out an interesting offseason, Kellogg added another role to his expanding presence in sports as Capital One announced yesterday that he’ll be an initial member of their advisory board for the newly formed Capital One Cup, a high profile competition among collegiate athletic departments.

How a site named Awful Announcing gets 20 minutes with someone as high profile as Clark Kellogg is somewhat of an enigma although a lot of the thanks goes to Don Povia from HHR and Blogs with Balls.

After the jump are some of the highlights from the interview before we got off track and started asking him about movies like Tin Cup and Happy Gilmore.

On the Move from Studio Analyst to Lead Color Commentator:

It was something I aspired to do. Billy Packer had done a bang-up job in that role for north of three decades and he’s an icon as an analyst in not just basketball but any sport. Doing a national championship game for 30 years is unprecedented and something I don’t think will be duplicated again.

Even though my role in the studio was terrific and I gained a comfort level there, I was hoping that at some point I’d be considered for the role as you don’t get a lot of chances to call one of the premier sporting events and I was just hoping to be in a position to be considered.  I am extremely grateful and thankful that it happened a couple of years ago. I don’t know if I can go for as long as Billy did, but I hope to stay in the seat for a few more years and it was a nice promotion and it was something that I hoped would find its way into my life.

I think its a positive thing. I mean the analyst role is uniquely suited for former coaches and former players because of the perspective and experience that they have. They understand what goes on behind the scenes so those guys are your best potential candidates.

Also with all the media platforms out there, athletes are aspiring to join the media earlier and more often so a lot of players are seeing their contemporaries or players they know make the transition and they say “That’s something I would like to do”. They begin to pursue it, plan for it, and prepare themselves as there are a lot more opportunities compared to 20 years ago.

The play by play role however I think is probably better suited for someone who has done a lot more things in broadcasting and are for people who are aspiring to move in that direction.

Significance of The New Capital One Cup to College Athletics:

It’s a new prestige program rewarding athletic programs for their cumulative on field performance across multiple men’s and women’s sports. There will be 13 women’s and 13 men’s sports that division 1 programs can compete in for an opportunity to win the Capital One Cup. It will be a cumulative scoring system from the fall sports, winter sports and through the spring sports with the winner of the Capital One Cup not only receiving a trophy but also $200,000 in funding for graduate scholarships for student athletes for both the men’s and women’s program winner.

It’s the most comprehensive rewards program in existence and I am thrilled to be a part of the advisory team. I think it’s a great way to not only put a spotlight on tremendous athletic achievement but also tying in the funding of graduate level scholarships for student athletes.

I am a big time fan. Matter of a fact one of the few negatives about moving away from the studio is that I don’t get to work with him as much. I get to work with Verne Lundquist and later on in the season with Jim Nantz and we have tremendous play by play guys at CBS. Both Verne and Jim are not only good at what they do but are good people to be around and fun to be around.

But I do miss not working with Gus as much as I did when I was in the studio. I think Gus is fantastic and that he has a terrific basketball voice because of knowledge of the game, his natural enthusiasm, and his uniqueness on how he combines his excitement and passion with terrific calls. I’ve heard this from countless people around the country as they love him doing NCAA games.

I think he’s a tremendous fan, play by play guy, and that his rhythm is hand in glove the style for basketball. He has a nice understanding for pace, flow, his excitement rises as the game goes from possession to possession. He just has as really intuitive sense for calling basketball that appeals to fans and makes him a lot of fun to work with.

On New CBS Contract Allowing All Games to be Broadcast Nationally and Games Including Finals Being Split Between CBS and Turner Sports Properties:

We’re all really happy and proud that the NCAA wants to continue its relationship with CBS. It’s been a 20 year relationship of televising the National Title game and we’re thrilled that’s going to continue. To have a partner like Turner Sports is a win win for us, the NCAA, and the fans. Having all of the games nationally televised on CBS and our cable partners is definitely great for the fans.

I don’t know how long I’ll be on the train, but it feels good that CBS owns the tracks to a key sports property.

Change can always be uncomfortable especially with all the speculation that was out there about what was possible. Initially I was totally opposed when the winds started to blow over a year ago. As I heard more and more reasons why expansion might be good, I became more open to it. I wasn’t really for any type of structure of expansion but I was open to it.

As we go from 65 to 68, I am comfortable with that change. Where we go from here I don’t know but the addition of some more teams and a few games is good and I am on board.

I am not going to speculate on what the final resting place is going to be if it grows again, but I’ll deal with that change down the road. I think it was a positive move and one that was well thought out.

Thoughts on New Role with Pacers:

My new role as Vice President of Player Relations which is basically overseeing the player development area which includes programming to help them be champions on and off the court in terms of community involvement and education programs for them. I’m really trying to mentor them through the demands and challenges that NBA players face. Particularly with the Pacers ,with so many players being young players being under 25 years old that didn’t graduate from college and now are rushed into the limelight and lifestyle of being a NBA player.

It’s something they have dreamed about but then navigating that successfully is really a challenge even for the most seasoned player that shows up. It’s just a demanding environment. My job is to try to help those guys grow up as professionals on and off the court and adapt to that environment.

Ha, that’s a tough one, but I’d lean towards Verne in Happy Gilmore. That appearance is unique and iconic and I’ve seen a lot of signs around the country when I travel with Verne that reference so I am going to give the nod to him.