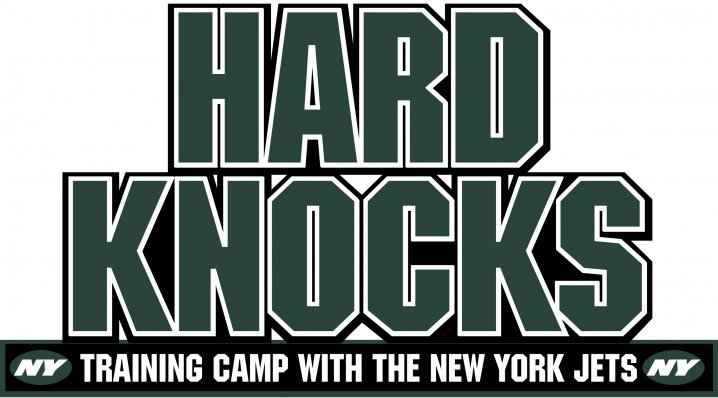 Admit it, you may not love the Jets, but you’re loving this season of Hard Knocks.

The locker room access. Rex Ryan’s awful eating habits and worse language. Antonio Cromartie’s gaggle of kids. Darrelle Revis. HBO could put out an hour episode a day and still not cover everything surrounding this team. They’ve got more storylines than a mid-day soap opera.

Now three episodes in, we’re closer than ever to the start of the season. But what have we really learned about the Jets?

1. If Mark Sanchez Really Is The Difference Between The Jets Going To The Super Bowl Or Not, They Probably Shouldn’t Pack Their Bags Just Yet: Look, I’m not ragging on Sanchez here, if only because most quarterbacks take a step back in their second year in the league. There’s a reason Marty Schottenheimer said in Episode 2 “If you get a second year quarterback to perform at his rookie level, that’s when you know you’ve made progress.”

At the same time, is it just me, or does Sanchez seem kind of immature? You know, like when his quarterbacks coach came in and said, “You know what you’re almost ready to do,” and Sanchez replied, “Stop sucking.” Sorry Mark, but that was a little too “11-year-old girl who got a C on her reading test” for my taste. As his coach said, you’re an NFL quarterback Mark, time to start acting like it.

Regardless, this has been my biggest contention with the Jets all preseason, what do they do if Sanchez isn’t ready? It’s not like he lit the world on fire last year, and unless someone gives him a blow torch and some gasoline, I don’t think he’s going to do it in 2010 either.

Also, is this really a guy you can see keeping everyone calm when the going gets tough? Is he going to be able to keep Santonio Holmes, LT, Braylon Edwards and everybody else in line when they’re not getting touches? I’m not really sure he’s that guy yet. And until he is, the Jets aren’t going to the Super Bowl.

2. Speaking of Sanchez, His Backup Apparently Isn’t A Big Fan Either: Umm, it’s not that Mark Brunell is jealous, bitter or hostile toward his younger counterpart. If anything, he’s been a good mentor from what we’ve seen (“His don’t blame the arrow, blame the Indian,” speech was straight out of my grandma’s playbook from the 1940’s. All he needed was a bowl of tapioca pudding while saying it).

No Brunell’s beef is different, but actually just like yours or mine: Brunell isn’t a big fan of Sanchez for the simple fact that his 18-year-old daughter (Just five years younger than Sanchez), has the hots for the Jets starting QB. Brunell even went on the record a few episodes ago and told Sanchez, “You’re not meeting her.”

And quite honestly, who could blame Brunell? The NFL already has one gray-bearded, 40-year-old quarterback that recently became a first time grandfather, one Brett Favre. Brunell certainly doesn’t want to be No. 2.

3. The Most Surprisingly Compelling Character So Far Has Been Special Teams Coach Mike Westhoff: First off, the dude is a cancer survivor, which already makes him cooler than you or I. But beyond that, it’s Westhoff’s, “I don’t care who the hell you are, if you can’t play get the hell off my football field,” Herman Boone approach to the game that makes him so fun to follow.

It’s also led to some killer one liner’s too. Here are a few of my favorites:

Westhoff on tight end Matt Mulligan’s excuse for his subpar play: “I don’t give a shit if you’ve got the triple f***ing Asian flu,” you’ve got to play better.

Westhoff on underachieving wide receiver David Clowney, “We’ve been talking about David Clowney’s potential since… I don’t know… When Bush was President.”

And finally his take on rookie cornerback Donovan Warren, “Donny, that was a good tackle you made in that drill. If you’d have played like that last year, maybe Michigan would’ve won some damn games!”

4. The Most Surprisingly Compelling Scene Of The Season Came At The Rookie Talent Show, Where Brian Jackson Won, “King Ugly”: What’s King Ugly, you ask? Well it’s a team vote on the three ugliest rookies in camp. Everyone donates a few bucks, and as Rex Ryan explained, “The third place winner gets 75 percent of the pot. The second place winner gets 25 percent. The first place winner gets nothing… because he’s so damn ugly he doesn’t deserve it.” Well then. (Also, don’t you wish we handed out “King Ugly,” Awards on every team, and in every league? Jorge Cantu would be working on his seventh straight MLB King Ugly Award right now.)

This year’s King Ugly competition took a surprising turn, when rookie offensive lineman Vladimir Duccasse was so ugly that he won both the second and third place prizes. (And believe me when I say, that dude is UGLY. If Shrek had a 6’5, 325 lb. brother who played in the NFL, it’d have definitely been Duccasse).

Meanwhile, the first prize went to cornerback Brian Jackson, not so much for his looks, but just simply because everybody on the team loathes him.

If you don’t believe me, check out the scene where the defensive veterans get pissed off at Jackson, tie him to the goal post, paste Icy Hot all over his body, then dump two buckets of Gatorade on his face. Funny scene. Unless you’re Jackson of course.

5. The Guy With The Coolest Name On The Team Has To Be…: 6’8 Defensive End Ropati Pitoitua. You thought I was going to say D’Brickishaw Ferguson, didn’t you?

6. LaDainian Tomlinson May Have Had The Most Unnecessarily Exuberant Touchdown Celebration I’ve Ever Seen: In Episode 2, when he jumped over the pile for a meaningless score, then slammed the ball down like he’d just clinched a Super Bowl win or something. Wow.

LT, my man, we get it. You’ve got a chip on your shoulder because of the way things ended in San Diego. We’re on your side. But it’s August 18, not December 18. You’re going against the second string in practice, not the first string of the Patriots. Deep breaths buddy, deep breaths.

Honestly, the whole scene reminded me of when one of my buddies ends an especially long dry spell, with an especially ugly girl, and acts like he just banged Scarlett Johansson. We know you’ve been there before. Act like it.

7. The Tony Dungy-Rex Ryan Controversy Is The Stupidest Storyline Of The Show: Look, I like Dungy. He’s a good man and a good family man from all accounts. He won a Super Bowl, which is obviously better than anything I’ll ever do in my life. But, the fact that he criticized Ryan for swearing too much on Hard Knocks, might be the single stupidest thing I’ve ever heard.

As my high school football coach used to say, football isn’t a contact sport. It’s a collision sport. A game where guys recklessly throw their bodies into and through one another, for sixty minutes a week, four months a year.

So if Ryan needs to drop a few F-Bombs to get his point across, is it really that big of a deal? This is a profession where guys are paid to inflict pain on their opponents. Where broken bones and torn and ACL’s are hazards of the job. Where up until a few years ago, people treated concussions like paper cuts. In context, are a few F-Bombs that bad?

Besides, the show isn’t on ABC Family. It’s on HBO. If the language doesn’t please you Mr. Dungy, don’t watch. It’s really that simple. I’m on Rex’s side on this one.

8. Joe McKnight Might Be The Least Likeable Guy On This Team: Or at least that’s how the producers of the show want us to think of him.

This guy puked in minicamp, failed a conditioning test, and really seems about as indifferent as a stoned 10th grader stuck in algebra class. Bart Scott even summed him up by saying that McKnight was frustrated because he was “Taking a pay cut,” by leaving USC for the Jets. Zing.

9. Forget The Players, The Scariest Guy On The Jets Is Defensive Coordinator Mike Pettine: I mentioned it in my Episode 1 Recap, and I’ll say it again: This guy looks like he broke out of San Quentin two days before camp. Was he coaching in the California Penal League last year?

All I’m saying is this: If Pettine tries to trade one of his backup linebackers for a carton of cigarettes next episode, I’m alerting the authorities.

10. Antonio Cromartie Needs A Vasectomy: I’m not really going to touch too much on this. If only because everyone and their mother’s have already cracked wise on Cromartie, and I don’t feel the need to pile on the poor guy (Ok, that’s a lie. I’m just not going to get too much into it, because I’m a week late, and everyone’s already used up all the good jokes. Damn.).

On a serious note though, how dumb is this guy? What’s he got now, seven kids in five states? Eight kids in six? I can’t keep track, but then again neither can he.

Also, please Antonio, don’t try and tell us that the producers made you look bad. They didn’t. You’ve got eight kids with six women or whatever. You made you look bad! Instead of blaming others, shouldn’t you have started wearing a condom after your second or third kid…of 2007? How are the producers at fault, when you have worse safe sex habits than the entire cast of Teenage Mom?

On a separate note, after all Cromartie’s baby momma’s suck dry his NFL riches (my guess is that if the Jets do win the Super Bowl this year, we’ll be seeing Cromartie’s championship ring on eBay sometime in 2017), he could probably make a nice second career out of donating sperm.

Think about it, if you were a single woman in her 40’s desperately trying to have a kid, wouldn’t Cromartie be your go to guy? Wouldn’t you be tracking him down, wining and dining him, then handing him a six-year-old copy of Playboy and a plastic cup? Wouldn’t you simply go into your doctor’s office and pay whatever it took to get the “Cromartie Special?”

Maybe he should hold off on that vasectomy after all.

And to read all of his work, visit www.aarontorres-sports.com

Aaron Torres works for Fox Sports, and was previously a best-selling author of the book 'The Unlikeliest Champion.'

He currently uses Aaron Torres Sports to occasionally weigh-in on the biggest stories from around sports.

He has previously done work for such outlets as Sports Illustrated, SB Nation and Slam Magazine.