(Usually) Everyday I’ll throw out a photo, you provide the caption, and then hilarity ensues. I’m also adding a handful of links at the bottom of the page that you should check out each day. 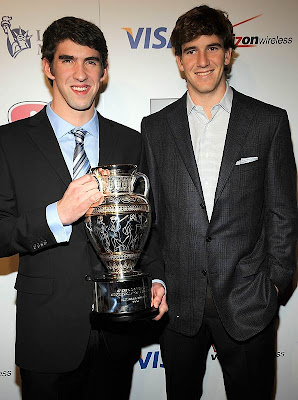 “It was an epic duel, but in the end Michael Phelps wins the ESPY for “Most Frightening Eyebrows” over last year’s winner Eli Manning.”- BF

“I thought my wax statue unveiling was a couple weeks ago.”- Anon

“Standing next to the cardboard cutout of Phelps, Eli learns he is indeed tall enough to be a douchebag.”- Jim Williams

Are you funny enough to create a caption for this photo of the Clippers, Baron Davis and Marcus Camby, during last night’s game against the Magic?