(Usually) Everyday I’ll throw out a photo from the AP or one of the bigger sites and you provide the caption. Hilarity ensues. I’m also adding a handful of links at the bottom of the page that you should check out each day.

“Roy Williams doing what he does best. Jogging behind a wide open receiver.”- Anon

“What’s the difference between a Stanford grad and a Cal grad? A Stanford grad would never come that close to an NFL end zone.”- Anon

“After Andy’s kid gave me some pre-game “vitamins” everything is really weird, man. I thought I crossed the goal line yesterday.”- Mal

Are you funny enough to create a caption for this photo of Rick Reilly hanging out under a net on the Colbert Report? 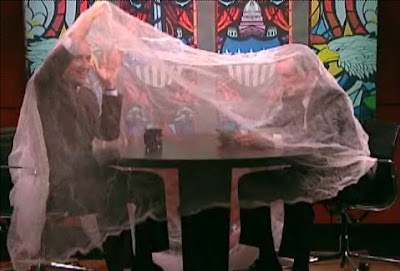 Inside The NFL Just Got A Bit More Attractive (Intentional Foul)
On Jerry Crasnick vs Baseball Stat Heads (Gelf)
Wait, How Do You Sink Your Own Battleship Again Fowler? (Victoria Times)
A Look At Where MLS Might Go With Expansion (Federation Soccer)
Joe Maddon’s Got A ‘Hawk (Bugs and Cranks)
You’re Killing Me Smalls Braylon! (S2N)
An Interesting Site On Parents Involvement In Youth Sports (Youth Sports Parents)
A Trip To A Klosterman Book Reading (Ghosts Of Wayne Fontes)
The Broadcaster Who Inspired The MTMS’s Ted Baxter Passes Away (The Zone Blitz)
Cowher And Vick In KC? (Arrowhead Addict)
Let’s Start The Gator-Vols Trash Talk (Moon Dog Sports)
Ex-Giant Mark Ingram Is Going To Jail (HHR)

FYI- The Reilly photo above was from an appearance to actually promote a great cause Nothing But Nets. Check it out if you get a chance.