(Usually) Everyday I’ll throw out a photo from the AP or one of the bigger sites and you provide the caption. Hilarity ensues. I’m also adding a handful of links at the bottom of the page that you should check out each day.

“Once again, Ellis Hobbs is nowhere to be seen.”- johnnymaher

“Man this is boring, I should brought the latest Danielle Steele novel.”- Frank In General

Are you funny enough to create a caption for this shot of the Lopez Twins posing together for a photo during the NBA Rookie Photo Shoot in Tarrytown, N.Y.? 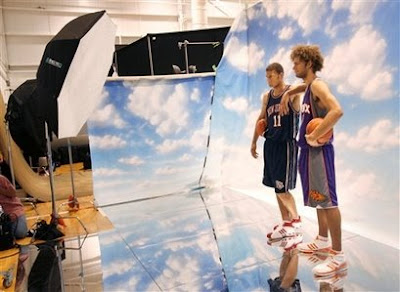 A New Women’s Blogging Network Decided To Come Along At The Right Time (Playing The Field)
What The Heck Is Brady Quinn Thinking? (Busted Coverage)
Art Monk Would Like A Moment Of Your Time (Kissing Suzy Kolber)
Yao And China Lose Their Warmup Game (Yahoo)
Hockey Player Pulls A Playmate (Rand Ball)
The NFL Fantastical Scale (Cake Rocks The Party)
Air Rage Is All The Rage (The Big Picture)
Six Degrees Of Derek Jeter (World Of Issac)
The Jackie Moon Of Soccer (The Beautiful Game)
If You Don’t Like Your Team, Sue Them (Lion In Oil)