Was I the only one that watched Dream Job on ESPN when it was first aired? No, not the Dee Brown edition, but the one that launched the career of one Anthony Michael Hall. I mean where else could you get dap from Stu Scott and be judged by the likes Kit Hoover, Tony K., ESPN VP Al Jaffe (who should have never come on tv), and THE Lavar Arrington? Nowhere….that’s where. Well years after Mikey Hall beat out contestants like Maggie Haskins and Chet Anekwe….he’s finally going to get his dream job….and it’s not with ESPN (surprise!)….

Three years after beating out 10,000 reality-show competitors to land his “Dream Job,” Hall has left ESPN and will move back to Chicago to explore on-air
opportunities.

Hall declined to offer specifics, but he’s likely to draw strong interest from Comcast SportsNet and the Big Ten Network, among others.

Some of his now former colleagues think he’s crazy to leave ESPNU, where he had been the signature anchor. ESPN tried to keep him by offering a raise, a short-term contract, so he wouldn’t feel tied down, and the promise of more high-profile work.

You can’t really blame someone for wanting to find a job in their own hometown, so I wish him luck. And those ex-collaegues are drinking the Kool-Aid because I’m pretty damn sure 8 out of 10 of them don’t even get ESPNU.

Mike, you take that Mazda M3 that you won in 2003, and you ride off into the sunset! 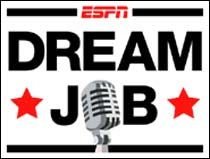