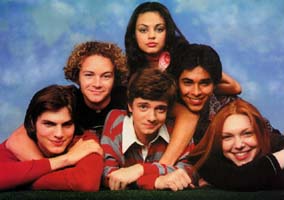 So what happens when your f’ing cable goes out during Game 5 of the NLCS in the 5th inning? And you can barely get FOX on your tiny little coat-hangered television???? Well you flip it to DC20 and watch a rerun of That 70s show.

(It was the episode where Red leaves town and Eric takes out his Corvette to impress some chick.)

Well without further ado…..I bring you The NLCS Game 5/That 70s Show Quotes Quiz Sponsored by Comcast Cable (bastards!). That’s right folks it’s The NG5T7SQQSBCC!!!!!!! It’s a multiple choice test that will test your knowledge of two of America’s Greatest Institutions…..baseball and television. Let’s get into it! (Hint: Baseball questions from the first 5 innings/That 70s Show from the last 4 innings)

Question #2- Who said the following quote…..”You wouldn’t care what kind of Girl he likes! You’re only DATING him!”

A. Donna
B. Jackie
C. So Taguchi
D. Joe Buck

Question #3- Who said the following quote…..”One of the reasons he’s succesful is because his ball is tightly wrapped.”

A. Triple
B. Kiss to Build A Dream On
C. Blunt
D. Chance

Question #5- Who said the following quote…..”Ohhhhh she’s THAT Girl….I know that Girl….stay away from THAT girl!”

Question #6- Which “That 70s Show” Star designed his own hat for New Era? (A Long Island, N.Y., native, ______ had the cap embroidered on the front left side with the initials “LI.” The cap’s rear embroidery is a silhouette of Long Island with its nickname “Strong Island” emblazoned across it. On the right side, the cap bears a shamrock logo, reflecting ______’s affinity for Ireland. A portion of _______’s cap proceeds will go to the Citizens Commission on Human Rights.)

Question #7- Which online reviewer said the following quote at IMDB, ” If TV was a baseball league, this show would have a perfect record! With an excellent cast, and a perfect plot, this show gave 8 amazing seasons and a great joy to TV after dinner.”

Question #8- Who actually provided some insight in yesterday’s game (rather than try to make ridiculous analogies) with this quote, “All the cardinals pitchers are establishing that inside part of the plate this game unlike the previous four games.”

Question #9- Fill in the blanks of this Joe Buck Quote…..”______ is a good young personality to build a baseball team around.”

Question #10- Who said the following quote…..”Just like if a receiver comes in and is going to receive a pass in your area……if you see a squeeze coming you throw at the batter.”

Did you get a perfect score? Good for you! Hopefully you got to watch the entire game static free. And tonight hopefully my cable’s back, I get a clear picture, and maybe I can have Joe Buck teach me how to build a team with personality rather than talent. I’m sure that’s why the Mets drafted Wright.