So the mailbag is upon us….yet again. These have been coming pretty frequently as of late, and I think we all know the reason why. Anyways, this thing is long so let’s get into it shall we?

Welcome back to the Mailbag

Q: Fresh off the most humiliating/frustrating/inconceivable five-game series of my life … where would you say that “Boston Massacre 2: The Empire Strikes the Death Blow” ranks in your all-time, gut-wrenching, makes-you-want-to-heave sports weekends?
–Steve D., Springfield, Mass.
SG: Honestly? I was 20 times more upset after the Pats-Broncos game last January. That Pats team had a chance to win the Super Bowl and blew it because of dumb turnovers and terrible officiating. This 2006 Red Sox team got swept by the Yanks because the front office did a crummie job for two straight years and we’re finally starting to see the full repercussions. They just aren’t very good. Take away interleague play (16-2) and the Orioles (11-1) and they’re 11 games under .500 (42-53) against everyone else. They have three reliable hitters in the clutch (Manny, Papi, Youk), one reliable starter (Schilling) and one reliable reliever (Papelbon). That’s it. These are the facts. They’re a borderline playoff team at best. At least everyone realizes it now.
While there’s a bit more officiating whinning in there (which I really can’t stand), I agree entirely with the statement. I think the Sox did an awful job in not acquirring bullpen help at either the beginning of the season or the deadline. Going to battle with Foulke and Timlin was just an idiotic plan, and makes me want to take Theo Epstein off the pedestal I’ve put him on.

Q: Is there a sports equivalent to your hung-over girlfriend asking, “Did we have sex last night?”
–Dave, New York
SG: The sad thing is, I thought about this for about 20 minutes. Here’s the best I could do: When your baseball team wins a fantastic game on Friday night, one of those 12-inning nail-biters that ends at 12:15 in the morning … and then 13 hours later, they’re playing the Saturday matinee and your starter gets shelled in the first inning for six runs. It’s like the Friday night nail-biter never happened. By the way, this is a mortal lock to happen any time the Sox win a dramatic Friday night game against the Yanks. Guaranteed. You know, if that ever happens again.
Great analogy. Just as it is with the Sox and Yanks, the same is true with the O’s and Blue Jays (The O’s have an 8-16 mark on Sundays this year)

Q: Was I the only one expecting Josh Blue to pull off the Keyser Soze “straightening walk” after he won “Last Comic Standing,” as a stunned Anthony Clark drops his coffee?
–Frank B., Bethlehem, Pa.
SG: The only one who’s headed to hell? Or the only one, period?
I was hoping for a better answer from BS (ha, I just made the connection that those are his initials….too funny) That was a pretty funny question.

Q: Where does Dane Cook’s “Tourgasm” fall into the greatest attempts at career suicide? My call … somewhere between David Caruso’s leaving “NYPD Blue” and Mel Gibson’s anti-Semitic tirade.
— Jim B., Lubbock, Texas
SG: Thank you for leaving out the Sports Guy cartoon. I’m eternally grateful.
If only he had responded to an email I sent him about a year ago….alas.

Q: What would be your list of “Best events to have front row seats” and why?
–Eric, New York
SG: Hmmmmm. My list looks like this:
1. Front row for a big boxing title fight. I just don’t think that can be topped — it’s the most brutal sport to see in person, the electricity is unbelievable, and if that’s not enough, hell might freeze over before we see another big fight. So if there actually WAS a big fight that truly meant something, I would pick that first. For instance, other than “USA 4, USSR 3,” if I could pick one non-Boston game to have seen in the front row, you know what it would be? Ali-Frazier I. Madison Square Garden, every major celeb in the house, two guys who hated each other … and that was the one fight where the fight matched the hype. And yet I digress.
2. Front row between home plate and the home dugout, Game 7 of the World Series. Best possible seat, PLUS you’re in serious foul ball territory and you might even be able to interfere with one of the opposing players on a pop-up. Really no downside.
3. The Jack Nicholson seats for Game 7 of an NBA Finals. Imagine being right there, between the scorer’s table and the visiting bench, being able to hear and see everything in the huddle, plus you’re courtside? I just got woozy.
10,000. Courtside, the WNBA Finals.
This is the only one I really had a problem with. With the state of boxing (including Simmons own article that the Heavyweight fighter is Extinct) this would have to be 20 or so on my list. To not have the Final Four listed is sacrelig. Also the WNBA Finals would not be 10,000 on my list….I would never attend under any circumstances.

Q: My pick for the Greatest Strip Club Song of All-Time is Def Leppard’s “Pour Some Sugar on Me”. I will not debate this. I will hear arguments, but strike them down like David Stern strikes down a player’s union.
–Tom, Minneapolis
SG: Well, that song has a few things going for it. First, it’s been around for 20-plus years — we’re at the point where it’s like sitting through a football game without hearing “We Will Rock You.” Walk into a strip joint and you know it’s coming, it’s only a matter of time.
This is such a good email this guy doesn’t even know it. Women absolutely LOVE that song for some reason. At parties in college it would rank second only to Living on Prayer, and that’s only because you can turn down the volume and do the sing-a-long chorus….WHOA OH!

Q: Well, it’s obvious Larry Legend is actually God and you have actually screwed the Red Sox. Ever since you compared Papi to Larry, the crap has literally hit the fan. Larry is getting even.
–Jeff, Buffalo Grove, Ill.
SG: I’d gladly sacrifice Big Papi’s MVP season to prove the larger point that Larry is the second coming. Done and done.
Aww, sorry BS…..it’s too late. See what you did? That cost your team its season.

Q: Why do you think the U.S. Dream Team is headed for disaster at the upcoming World Championships?
–Geoff, Austin, Texas
SG: I don’t like the team they picked or the style of play they’re using. It’s that simple. We just spent the last two years babbling on and on about what kind of formula works for international play — slash-and-kick, shooters spreading the court, everything centering around the point guard — and they decided to build the team around ‘Melo/LeBron/Wade (all of whom have games more suited for the NBA), a pressure defense that any good international team will gleefully pick apart, and a coach from a college that everybody in America hates. Subconsciously, we’ll all be rooting against the U.S. because of all the Coack K shots on the sidelines. I just think the whole process was inane. We’re going to lose to Brazil, Spain or Argentina. I’m telling you.
I agree with this so much it makes me sick. I can’t believe they botched this thing again (mainly for getting rid of Bowen). I watched the Italy game the other morning and it took an otherworldly performance from Melo to save them. I mean they were down 9 at the half.

Q: You poked fun at “Moneyball” saying that all the players profiled (other than Nick Swisher) have been complete failures. Scott Hatteburg is hitting .325/.418/.498 for the Reds this year, making less than $1 million. Can’t argue with those numbers at that salary, exactly the point of “Moneyball.” Not everyone can have a $200 million payroll, or $120 (million) like the “tortured” Red Sox.
–Nick, Cincinnati
SG: Very good point. I haven’t been following the National League for the same reasons that I don’t follow the International League and the Pacific Coast League, so I didn’t realize Hatteberg was having such a good season. Actually, so is Chad Bradford for the Mets. Just a little more research and I would have been right back in that thing. Look, don’t forget that I’m an idiot. Don’t forget this for a second.
Uh huh…..exactly. I’m now finding and rooting for a National League playoff team….it’s official.

Q: Whether you like it or not, the “Caddyshack” remake is going to happen some day. There’s no fighting it. So at least tell me how you would cast it, and do so before the real thing happens and they screw it up.
–Dave, Portsmouth, N.H.
SG: What do you mean, there’s no fighting it? I will absolutely fight it and organize protest Web sites, viral anti-marketing campaigns and opening-day boycotts if this happens. Nobody under 45 years old wants to see a “Caddyshack” remake with Dane Cook as Ty Webb, Haley Joel Osment as Danny Noonan, Ben Stiller as Carl Spackler and Alec Baldwin as Al Czervik. Repeat: Nobody. But here’s what would be acceptable: “Black Caddyshack.” Couldn’t we take it in another direction with Snoop Dogg as Ty Webb, Bernie Mac as Judge Smails, Sam Jackson as Al Czervik, Jamie Foxx as Carl Spackler and Beyonce as Lacey Underall? With the right cast, I might give “Black Caddyshack” a chance.
That’s pretty overtly racist. It doesn’t really bother me, but I’m surprised that ESPN let the one slide.

Grading and Final Comments: While this was a pretty good mailbag on the whole I did notice something as I read through it for a second time. Anyone else notice how he fluffs these things up?

I was going to give this a 4, but with the combination of the Front Row Seats Answer and my latest revelation I’m dropping it to a 3.5 Boston Championship Rings. 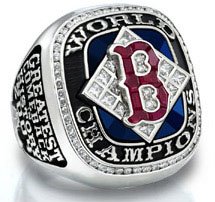 As always your comments and thoughts are always welcome……Let me know what you thought.