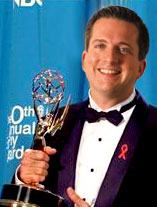 Wow! Two in one day!!! Aren’t you special? Here’s the next one on our list. We get bypassed by the Vegas article again for yet another Sports Guy’s Rules/Changes/Countdowns, but here’s the CRAZY thing……I actually liked it!

At this point the ESPN the Mag articles are the only thing of his that is readable from start to finish. I swear that ESPN pays him by the word for those mailbags. Let’s get into this thing with a few comments as we go.

4) David Stern resigns … but to become President of the United States.
Agreed. I can’t think of another person that has turned a business around like that. Think of what he could do with a country.

5) The Knicks extend Isiah’s deal through 2015 by explaining, “This had nothing to do with winning or losing. We had to do it for comedy’s sake.”
Everyone agrees on this I think.

6) Julio Franco isn’t allowed to retire. He has to keep playing until we all agree he can stop. Let’s see how far this can go.
As does everyone on this point as well.

7) All right, would you rather keep reading boring story after boring story about the messy ownership situations with the Sonics and Hawks … or would you rather see them merge franchises, move to Vegas and immediately become the Las Vegas Dice? (Wow, you picked the latter! I can’t believe it!)
Not bad….not a bad idea at all.

8) Sideline reporters — gone. We survived the World Cup without them, right?
Oh you knew I was agreeing with this right away.

9) I’m not ready to abolish baseball’s All-Star Game, even though the voting process sucks, every writer/radio host tries to pretend it’s a national tragedy that so-and-so didn’t make it (even though nobody can remember who played two weeks later), and the crowd always lapses into a collective coma by the third inning. But instead of “starting lineups,” let’s vote on “finishing lineups” — the eight best position players come in for the sixth and play the rest of the game. Shouldn’t the elite stars decide homefield advantage for the World Series? Besides, we need another format for A-Rod to choke in the clutch.
Not sure about this idea, but after this year’s game….anything could help.

10) No more long putters, no more DH, no more puff pieces, no more sportswriters screaming at each other on TV, no more pickoff throws (you can only take a lead to a certain point), no more canned music during NBA play, no more Barbaro coverage.
The lead thing is just dumb, but everything else I agree with.

11) We all agree that A) there will never be another MJ, and B) we’re not allowed to compare anyone to him.
Agreed.

12) Men’s tennis switches to a best-of-seven format with shorter sets — first to four wins a set, and if there’s a 4-4 tie, then we go to a longer tiebreaker (first to 10 points). I want to care about tennis again. Really, I do.
This is one of the only ones I have a problem with. Men’s tennis just will never be good in the United States. I think Soccer only survives because kids play it religiously when they are younger and never truly grow out of it. Tennis I just cannot get into….well Men’s Tennis.

13) The Olympics and the World Cup happen every three years, not four. You can never have too much of a good thing.
I agree with the WC, but not the Olympics. NBC’s coverage is nauseating, and with it every three years the network would go under.

14) Mike Shanahan agrees to stop platooning running backs and messing with the minds of countless fantasy owners.
I’m begining to think he might actually read this site. Are you Anonymous Bill?

16) The Patriots go back to blood-red uniforms and the Pat Patriot logo. Enough is enough. I want my childhood back.
Those Unis were badass. Too bad the team wasn’t.

17) Baseball adopts the relegation system from the English Premier league — lose 100 games or more and you’re shipped to Triple-A for one season. That means you, Kansas City.
I can go along with that.

19) Fans get to vote on entrance music for their closers. If Detroit fans want to saddle Todd Jones with Tom Petty’s “Stop Dragging My Heart Around” or Nirvana’s “Rape Me,” that’s their choice. Also, all teams are required to use the bullpen car again. I miss the bullpen car.
Not sure about this one. The bullpen car is always a winner.

20) Boxing takes a cue from the UFC and WWE and shifts to one monster pay-per-view every month (three hours of quality fights and a main event). Also, they go from three judges to five. And Don King is deported.
Couldn’t agree more. I watched Forrest v. Quartey this past Saturday and the judging was awful. Quartey won by at least 5 rounds and ended up losing by two. Forrest even had a point taken away for low blows! Boxing is so fixed right now.

21) No more aluminum bats in college. We’re reaching the point where some roid-enhanced line drive is going to rip through a pitcher’s head like an assassin’s bullet.
Didn’t a few people die already?

22) Whenever there’s a replay challenge or serious injury in the NFL, they have to immediately go to a commercial, bang out as many ads as possible, then come back and tell us what happened. We could wipe out 10 minutes of TV timeouts per game.
Agreed.

23 When two NASCAR drivers get into a post-race fight, it has to be like hockey — everyone else stands back and lets the two guys have it out, even if they end up pulling their fire retardant suits over each other’s heads.
There is nothing more wimpy than a NASCAR fight. I’m sorry Jeffmina Gordon does not intimidate me.

24) Speaking of hockey, the NHL has to dump six teams, cut down to a 70-game season and make every playoff series a best-of-nine. Also, they can’t show their playoff games on any network that could potentially give them a 2002 “Survivor” re-run as a lead-in.
Another one I don’t agree with. There’s no way I could last through a nine game series.

25) To spruce up the always-lame PGA Championship, every player has to go caddy-less and carry his own bags for 72 holes. Now that’s a major! Like you wouldn’t watch just to see who was fading by Day Three, or to see Mickelson fighting off tears and saying things like, “This is a wakeup call, maybe I need to cut down on the carbs” after shooting a 92 and throwing up on the 14th hole.
The Mickelson visual made me laugh-out-loud.

26) Cameras are no longer allowed to zoom in within 18 inches of somebody’s face. I don’t need any more unpopped whiteheads, acne scars and dangling nose hairs in my life.
Agreed.

27) My bosses won’t allow me to say which six announcers I would deport to Eastern Europe, but here are their initials jumbled together backwards: WBMABCMJMTBJ.
Thanks to some Deadspinners your answers are Joe Buck, Tim McCarver, Joe Morgan, Chris Berman, Al Michaels, Bill Walton. I agree on everyone but Bill Walton…..I think I like him now. He doesn’t know what he’s saying half the time, but he truly loves the game….unlike some of the other pompous asses on that list.

28) For the “Season Pass” packages on DirecTV, we’d always have the option of watching the telecast with our favorite team’s announcers. What’s the point of shelling out two bills a year for the NBA or baseball and not getting your own guys every game? And while we’re on the subject, no more blacking out Saturday’s early Fox games on the West Coast. Unless you want me to eventually kill someone.

29) For NBA All-Star Weekend: A H-O-R-S-E contest, a halfcourt shot contest and a dunk contest with a rim that keeps raising like a high jump bar. I keep pushing for these three things, they keep ignoring me.
I’m down with HORSE and the halfcourt, but the high jump bar would get boring.

30) Sunglasses are banned from professional poker, for two reasons: A) it’s more interesting to see everyone’s eyes, and B) it’s hard to defend any sport where the players dress up like blind tourists.
Poker isn’t a sport so I refuse to comment.

31) At least one NHL team would be required to attempt the 500-pound goalie thing. Even if it’s for an exhibition game.

32) If someone has front row seats and brings their small child with them, and that poor kid subsequently gets struck by a foul ball or accidentally trampled by a gigantic basketball player … then the parent loses all parental rights to that kid and Shea Hillenbrand gets to adopt him or her.
I chuckled at this one….Shea would be a great surrogate.

33) Barry Bonds goes to jail. We needed to mention that one twice.
I’m an innocent before proven guilty guy, but come on…..this has to happen.

So there you have it. I can go from one extreme to the other in a matter of minutes. I’m not all that bad am I? Here’s the judging:

Timing and Relevance: Doesn’t really pertain to this article. I think the majority of the ideas were fresh ones (minus the 500lb goalie and the NBA All-Star game stuff).

Number of Boston Sports References: Only one mention….not bad. The forum didn’t really allow for many though.

Knowledge and Conveyance of Knowledge: This was an A+ in my mind. It’s not just the recent rambling and make a bad joke of late. These were well thought out ideas, and some very plausible.

Overall Writing and Impact: I thought this was a great piece of sports writing. It wasn’t overly pretentious or egotistical, and it got the point across.

Grade: I’m giving this one a 4 out of 5 Boston Championship Rings. It was a borderline 4.5, and is probably a 4.25, but I’m not photoshopping another ring. I think I was overly harsh in V.3, but I’m getting bitter here folks. Maybe, just maybe, he threw me a bone here…..nah probably not. I’ll just have to wait until the Vegas article to get back down into the twos (or maybe he’ll surprise me). As always your comments are welcome. 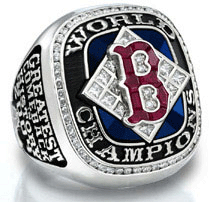