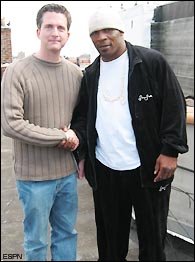 So yesterday we gave Simmons the categories of MVP Awards, Breakthrough Performance, Sidekicks, Best 12-Month Stretch, Rivals, Defining Performance, and Charisma/Duende. Even with only these categories Larry Bird still came out the winner.

Here’s the next and final part. I have to comment on the rest of the categories. Not only we’re they absolutely ridiculous, and not funny, but they also had nothing to do with the original question. That’s right folks…..16 out of 23! Categories meant absolutely nothing. Let’s get to it:

Here’s the original question from our boy Ruuuuusty:
Q. Unbelievable. David Ortiz just hammered a fastball into the center-field seats at Fenway, winning another comebacker for the Sox, 9-8. I bet my buddy $5 that Papi would homer, and I felt absolutely confident he would deliver. There was no doubt in anyone’s mind … the people in the stands even saw it coming; you could tell. Absolutely! Was Bird even this clutch??
–Rusty Bowman, Charlotte, N.C.

1) Nickname- Okay I can understand adding nickname as maybe a tiebreaker, and maybe for humor, but this is what SG gives us:

“Papi” is a Latino phrase of endearment that women use for their husbands or lovers and has, umm, romantic connotations”

Really? I was unaware of that. I have a question for you Mr. Simmons….when did you start getting your humor from Desperate Housewives?

Also, Larry’s nickname is the Legend. THE LEGEND…..enough said.

2) Rings- This makes zero sense. You can’t compare one ring over the begining of a career to 3 over a legacy of a career. Just stupid.

3) Defining Video Game- This is so relevant to an athelte’s clutch factor it’s ridiculous. With that being said, in MLB 2006 (as the O’s) I picked Ortiz up as a free agent. He proceeded to hit 53 homers.

4) Best YouTube Clip: Okay….while this category has nothing to do with clutchness I will give it up for that clip. The fact that some Masshole snuck in a video camera for that is pretty cool.

5) Defensive Shortcomings: This category also doesn’t make sense in relation to being clutch. Clutchdome is an offensive trait.

6) Defining Quote: Now I would assume that this would be a defining quote from the individual themselves. Like if Ortiz called A-Rod a bitch or something after he swatted the ball out of Arroyo’s glove. But Simmons compares quotes from Magic and Danny Ainge against the fact that Ortiz hasn’t made a quote? I’m so confused right now…..this stopped being funny along time ago.

7) Value as a Teammate: A very important category, and I wouldn’t ever leave this out. But Mr. Simmons already has this category. It’s called Sidekicks. Save some ink Bill…..it’s the same thing…..but let’s delve into this one a bit. Here’s Bill:

“Bird’s passing was so creative that his unselfishness spread to everyone on the team, culminating in a once-in-a-lifetime ’86 Celtics season that remains the standard for unselfish NBA play; baseball doesn’t allow one player to affect his teammates like that. And both were almost supernaturally clutch, giving everyone else on their team that “If we can just keep it close, Papi/Larry will win it for us” confidence. I can’t pick a winner here. EDGE: EVEN.”

Even!?!?! Are you kidding me? You used the term “Once in a lifetime”!!! And you even say that baseball doesn’t allow one player to affect his teammate like that. What are you smoking? That LA weed has you losing your mind William. Moving on…..

9) Frequency in the “I’m Keith Hernandez” Zone: Okay he’s already done this category about five times but of course he has to get a mid-90’s joke in the column. Let’s analyze…

“There was one stretch during the ’86 season when he was actually bored by how good he was, so he started using his left hand more (during one game, he took only left-handed shots in the first half), then Bird and Walton started trying to see how many times they could run the back door play in one game, then he went through a stage when he was backing guys down on the low post just to see how many different ways he could create a basket. … I mean, Larry Bird freaking experimented during games. When will we ever see something like that again?”

That’s actually pretty awesome on Bird’s end, but he plays basketball. How can you compare that to baseball? What is Ortiz just going to start batting right-handed in blow out games…..hell throw him in at pitcher….that worked well for Canseco.

10) Pioneering Moment: Another important category, but we’ve already given him Breakthrough Performance, Best 12-Month Span, and Defining Performance. I fail to see how this category isn’t in one of those. Further……

“Bird is mistakenly credited with inventing the Blonde Permed Afro Mullet that would ultimately be embraced by Randy West, Ian Ziering and others. Actually, Jack Sikma had that thing going first. But here’s something Bird did pioneer: He was the first NBA star to embrace the 3-pointer as an end-of-the-game dagger. Of course, Papi was the first baseball star to dramatically flip off his baseball helmet rounding third base after a walk-off homer, then take the flying leap into his teammates. That’s a draw if I ever saw one.” EDGE: EVEN.

These are NOT, and I repeat NOT pioneering moments. Poor attempt at humor there….he just needed a 90210 joke I think.

11) Reliance on Performance-Enhancing Drugs: Umm What? Is this supposed to be funny? I don’t get it.

14) Reverence from Teammates and Opponents: This category might make sense if you used it in the sense of fear. You could have used your precious Magic quotes, and gotten a quote about Ortiz. Did you do that? Of course not.

15) Clutchness: Finally!!!!! We get to the original point. But I was always told that you can’t use the word you are defining in the definition??? Whatever, I’ll let it slide….let’s now read the genius that is Bill Simmons:

“But Bird probably made 30-35 game-winners and buzzer-beaters during his career, along with dozens of game-clinching free throws (I can remember him bricking big free throws only twice in that entire decade, which is saying something). Plus, he came up with the most famous clutch steal of the past 40 years

Then you have Big Papi, the best clutch hitter of his generation. The Elias Sports Bureau was nice enough to send these numbers along: If Ortiz has one more walk-off hit in 2006, he’ll be the first baseball hitter to have six in a single season since the division era began in 1969.

Basketball stars have a 45-50 percent chance of coming through in the clutch. In Bird’s case, he was a 50 percent shooter and a 90 percent free-throw shooter, so even if he was being double-teamed, 60/40 odds seem reasonable, especially if someone raises his game in those situations. But a star slugger gets on base 40 percent of the time, only Ortiz dials it up to the 60-70 percent range in big moments (as the stats back up). I can’t believe I’m saying this, but Big Papi’s current three-year stretch tops anything Bird came up with simply because the odds against Ortiz were greater.”

Now I’m not a Mathmetician by any means, but it seems to me you are either clutch or your not. There are no percentages…..If there are Ortiz is 100% Clutch, and A-Rod is 0% Clutch. What’s even more maddening is that he’s comparing shooting percentage in Basketball to the percentage that someone succeeds in hitting a baseball in an at-bat to win a game. How the hell is this equivalent I ask you???