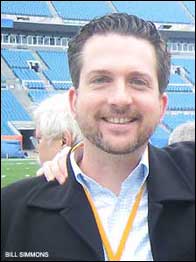 Okay, before I lay into this I just want to comment on how funny this week has been for Simmons. First, he’s apparently busted out on the first day (Anna Benson lasted longer) of the WSOP, which he’s been hyping for over a year now. Second, the Automatic Sports Guy Article Generator comes out, and is such a hit the site is crashed. And after all of that…he puts out this ridiculous article: Bird vs. Ortiz.

Last night I noticed that the fellas over at Sportszilla and the Jabber Jocks: Hey Sports Guy… tackled the insanity of the baseball stats provided by Simmons. They did a stellar job, and I figured since they did baseball I’ll do the entire article along with the basketball side of things.

Let me remind you of our judging criteria is based on the following: 1) Timing and Relevance 2) The number of Boston Sports References 3) Knowledge, and conveyance of said knowledge 4) Overall writing and impact. Let’s dive into this garbage……(P.S.- I’m going to do a quick review in Part One and give the score because this might get a little long. I’m going to keep going after that in detail in Part Two, so print it out and take it to the bathroom. That’s where I will really lay into him.)

The First problem I have is…..What the Hell Question are we answering here? Our friend Rusty asks:

Q. Unbelievable. David Ortiz just hammered a fastball into the center-field seats at Fenway, winning another comebacker for the Sox, 9-8. I bet my buddy $5 that Papi would homer, and I felt absolutely confident he would deliver. There was no doubt in anyone’s mind … the people in the stands even saw it coming; you could tell. Absolutely! Was Bird even this clutch??
–Rusty Bowman, Charlotte, N.C.

The Second Contention I have with the article are the categories. Over 70% of them are completely worthless and provide nothing. It’s hard enough to compare baseball to basketball, but you make it even more difficult with these categories below:

Do we see a problem here??? That’s a ridiculous amount of categories. Here’s what I will give him: MVP Awards, Breakthrough Performance, Sidekicks (someone has to be on base for Ortiz to be clutch), Best 12-Month Stretch, Rivals (or who they are clutch against), Defining Performance, and Charisma/Duende (everyone needs a little swagger when being clutch).

(More on that in Part Two)

The way he awards the categories makes no sense either…..for example:

Value as a Teammate: Bird led by example and became notoriously salty when teammates let him down — personified by his “We played like a bunch of women” rant after Game 3 of the ’84 Finals — whereas Big Papi’s the most beloved clubhouse leader in baseball (and maybe in any sport). On the flip side, Bird’s passing was so creative that his unselfishness spread to everyone on the team, culminating in a once-in-a-lifetime ’86 Celtics season that remains the standard for unselfish NBA play; baseball doesn’t allow one player to affect his teammates like that. And both were almost supernaturally clutch, giving everyone else on their team that “If we can just keep it close, Papi/Larry will win it for us” confidence. I can’t pick a winner here. EDGE: EVEN.

How in the world is this even?!?!?! Your value as a teammate is so much more in a sport like Basketball than in baseball. Your play on the court directly ties into the way others on the court react with you. In baseball your play affects your teammates, but not even remotely to the same degree.

Defining Performance: For Bird, you have to go with the ’87 playoffs when he singlehandedly carried a crippled Celtics team through two Game 7s (against the dangerous Bucks and a positively terrifying Pistons team) and into the Finals (where they finally fell to a Pantheon-level Lakers team). And this was after three straight MVP seasons and a slew of buzzer-beaters, so by the time he made his famous steal against Detroit that spring, everyone in New England was convinced that Bird was some sort of a higher form of being. As long as he could walk, we had a chance.

For Big Papi, it’s the 2004 playoffs: The homer off Jarrod Washburn to win Game 3 of the ALDS, followed by the homer to avoid the sweep against the Yanks in the Dave Roberts Game, followed by the homer off Flash to pull them within one in Game 5, and then the walk-off single in the 14th inning. Much like with Bird in ’87, somewhere along the line it reached the point where we started EXPECTING him to come through every time. And now he’s reached full-fledged Bird status — as Theo Epstein pointed out after Monday’s game, Ortiz’s ongoing brilliance made him think of “Bird hitting all those buzzer-beaters and when he missed one, people would say, ‘What?'”

One more note here: Up until 2004, out of any game I ever watched in person, Bird’s Steal was the single most exciting moment … but Big Papi’s game-winner in Game 4 ranks fourth (right behind Vinatieri’s kick against the Rams) and the game-winning single in Game 5 ranks first. Of course, if Bird doesn’t miss that game-ending 3 against the Lakers in Game 4 by 1/100th of an inch, the list might look a little different. EDGE: BIG PAPI.

As a fan of all Sports there is not a clip that is shown more in any sport. When the World Series rolls around you don’t see the Ortiz Homer over and over and over. But that Bird clip with the audio is always played. He also doesn’t even mention the 60 point game.

… and like every other Red Sox fan, I found myself smiling and thinking, “All right, if we can just get one guy on, Papi ties this game.”

As it turned out, we got two guys on and he won it. The point is, it’s not surprising anymore. We EXPECT him to come through. Bird was the same way, but the degree of difficulty is higher in baseball making Ortiz’s last three seasons slightly more remarkable. Emphasis on the word “slightly.” MINISCULE EDGE: BIG PAPI.

Ummm Don’t you just prove the point that you wasted 7 pages of comparison by saying you can’t compare them. Forget about the fact that you didn’t even answer the original question.

So here’s the verdict…..

1) Timing and Relevance: I guess the timing isn’t that off since Ortiz is killing relievers, but isn’t this an off-season subject?

2) The number of Boston Sports References: I can’t even grade this because it’s the whole damn article.

3) Knowledge and conveyance of said knowledge: As Sportszilla points out this article makes zero sense from a statistical angle. He knows a ton about Bird and Ortiz, but not the first thing about comparing the two.

4) Overall writing and impact: This article was HORRIBLE, and by horrible I mean GOD AWFUL. I could barely even get through page 3…..seriously. The arguments make no sense, the categories are retarded, and he DOESN’T ANSWER THE ORIGINAL QUESTION!

CONCLUSION: This is honestly the worst article of Simmons I’ve ever read, and you probably feel the same way too. I’m giving this one giant a giant one……NEW YORK YANKEES 2000 WORLD SERIES CHAMPIONSHIP RING! (That equals a -1) Stick around for Part 2 where I take the hatred of this article to another level.