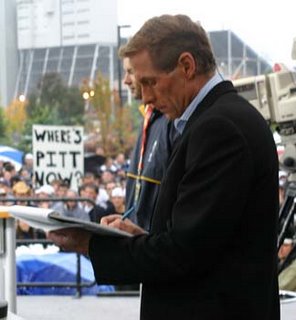 The SportsNation chat……where Average Joes like us can talk to famous ESPN personalities, No-name analysts, and Low-Tier college athletes (In fact as I write this…….Deadspin). Well Skip always brought his A-game to his chats. He would think every question was being asked by Woody Paige, and proceed to berate the fan who was asking said question. Good Times.

Well Skip had two amazing chats in 2004. Only two you ask? Yes, only two, but trust me he was just as much of an asshole, er upstanding Journalist back then. Let’s begin….

JB (Shreveport, LA): Skip, after reading your column on T.O., I understand why so many athletes hate sports writers. I bet you saved that column for the first lost by the Eagles. You writers are the guys who got picked last in gym class.

Skip Bayless: JB, I wrote that column three days BEFORE the Eagles lost to the Steelers. When I wrote a column in the Bay Area, I was Owens’ lone supporter in 2001 and 2002. But, as I wrote on Page 2, the guy went over the edge after the Sharpie episode and started believing he was more entertainer than football player. Last year, he was “Terrible” Owens, dropping pass after big pass, especially on the road. I don’t believe he’s mentally tough, and I’ve said that to his face, at least while interviewing him on television.
And by the way, I did make all-city in baseball my senior year of high school and I have run a 2:47 marathon, so you’ve got to give me that much.

Ouch…..JB with the Physical Education Dig. I’m sure Skip came up with “Terrible” Owens as well. Actually a 2:47 Marathon is pretty impressive though. See we learned something about Skip today, and we’re only one question in.

Will B. (Va Beach): What possessed you to move from the San Jose Mercury News, a paper i’ve been trying to right for for months, to Cold Pizza?

Skip Bayless: At least we know why you’re not “righting” for the Mercury News. “Cold Pizza” is the biggest challenge of my career, and I wanted to enter the force field of the most creative and fearless man in sports media, if not all media — Mark Shapiro, who runs ESPN and oversees “Cold Pizza.” Woody and I have been friends for 30 years, and I think we have very lively “Odd Couple” chemistry. You’ll also soon be able to see us every afternoon at, I believe, 4 Eastern on ESPN.

Here’s our Skip! Will B. gives Skip some credit and he basically says he’s an idiot. (P.S.- Anonymous commenter, I am not secretly Will B. from Va. Beach.)

Greg (Boston): Skip, I know you’ve grown tired of TO, but your really going to compare some stupid end zone dancing to Artests asking out of a month admitting he’s tired from promoting a CD. Sorry, Artests contract should have been voidable on the spot for not being 100% due to his own negligence. That is a far greater malfeasence than anything TO would think to do

Skip Bayless: Greg, you obviously haven’t spent any time around Owens, while I’ve spent too much time. Last year, I talked to far too many 49ers and front office staffers who came to despise the guy because he set himself apart from, and above, the team. Do you know how many times last year that teammates ran to congratulate him a moment before he did his latest look-at-me sideshow, only to be ignored by him. Jeff Garcia finally quit running down to try exchanging high fives with Owens. He sees himself more as a performer than a football player or teammate, as Philly is finding out.

Why did he rant at McNabb on the sideline after things went south in Pittsburgh? Because he’s so camera savvy that he wanted to send a message to the media and fans that it was McNabb’s fault — that he was trying to pump up McNabb and get HIM back in the game. No, for me, this guy’s right there with Artest.

Greg you’re an idiot….come on. Of course you can compare a psychopath with a showoff…..on every level. Get in the game Greg!!!

Steven A. Smith (Philly): How does it feel to be one of the most annoying sports personalities on TV?

Skip Bayless: Steven A.: I’m just trying to keep up with my friend Stephen A.

I don’t have a joke here….just thought that was funny. And Skip obviously didn’t get the joke.

Geoff (Philadelphia): What will Owens eat at the end of the season, Championship Pie or crow?

Skip Bayless: So far, he has. I said on “Cold Pizza” that I would have to make he and McNabb my halfway MVPs. But Philly has to play lots of division road games in the second half, and Eagles fans will see the real “Terrible” Owens.

Skip Bayless: Thanks, everyone. Tell T.O. hi for me. The doctor is out.

Ummm What? Really, what just happened. Philly Cheesecrow? Woody, what? Jay Crawford, huh? Was there a question?…..what is Stud Puffy? You’re a doctor now??? Wow, that’s all I can say….Wow, that’s how you end a chat!

Skip Bayless: Half the Jungle loves me. War Rome.

Oh god….Rome and Bayless…..the world is coming to an end. Can we get Chris Jim Everett to take care of them please?

(It never gets old.)

Bucky Bo, Virginia: Skip, How much longer will you be doing Cold Pizza until you retire? I really love your columns and your 1st & 10 segments with Woody, but you’ve been doing the whole sports thing for so long I assume retirement has crossed your mind, right?

Skip Bayless: I have the body of an 18-year-old, while Woody has the instincts of a 12-year-old, so we plan to do First and Ten (also on weekdays at 4 Eastern on ESPN) until they tell us to go home.

John (Portland, ME): Do you think Bonds’ (alleged) use of steroids should keep him out of the HOF?

Skip Bayless: Kevin, I wrote about this last week for ESPN.com, and the response shocked me. My problem is, while writing columns in the Bay Area, I was probably the first writer in the country to suspect Bonds in print. But the point of what I wrote last week was that, even though the wall of cirumstantial evidence is now so high that even Bonds couldn’t hit a ball over it, I still don’t KNOW he used steroids except for the brief period in 2003 during which he said was duped by his trainer.
Yeah, yeah, yeah, the Bonds haters say WAKE UP. I’ve been awake on this issue for years. Bonds has some of the greatest genetics you’ll ever find — dad was a star, mom a star softball player — and it’s still possible he packed on 40 or so pounds by weight training and eating right. He does both fanatically.
Please don’t give me the “look at the size of his head” argument. It was already big, literally and figuratively. And he was already the most gifted baseball player I’ve ever seen. So he still gets my Hall vote.
Put a gun to my head, I say he used something other than Wheaties to get big. But I still can’t be dead-solid certain.

That’s right everyone Skip was the first writer to put Bonds’ Steroid Use in print. What you didn’t know that? Well shut up idiot…..Skip is THA MAN! Recognize.

Brett (Philadelphia, PA): Hey Skip, I’m still waiting for TO to blow up like you said…I guess it will never happen, because we’re going to the Super Bowl…yeah, Go EAGLES!

Skip Bayless: Deazr Brett: I’m amazed at 1) how sensationally and consistently McNabb has played so far and 2) how well he has handled Owens by keeping him involved and in check. But at some point when the pressure mounts, T.O. will bite teh Eagles in the behind. If I were you, I’d start looking over my shoulder at the Panthers.

Okay Okay…..he’s right some of the time.

Joe (Huntsville,AL): Will Nick Saban end up as the Dolphins HC?

Skip Bayless: Something tells me he’ll decide he has a better chance of winning another national championship at LSU than of dethroning his mentor, Belichick, in the AFC East.

But he’s wrong MOST of the time

Matt (Stoneham): Skip, How can i get your job?

bryan (dallas): Skip!! Fix the Cowboys!! What would you do?

Skip Bayless: That’s it, folks. Thanks for the questions and for suffering my opinions. My analysis of Kobe should be posted on ESPN.com soon. Later …