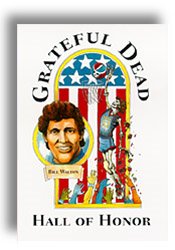 So apparently all the drugs Bill Walton has taken at Greatful Dead shows over the years have finally caught up to him. During the first half of the Suns/Clippers game last night he threw out this masterpiece, “Steve Nash and Bill Russell are the same person.” What does that even mean? My first thought was obviously that Bill Russell was an African American Center and Steve Nash is a White Point Guard, but Bill goes into further detail…..”They are both MVPs, They both went to small West Coast Colleges, both only got one scholarship offer, and they both came from tough environments.”

Wait a tic? Okay let’s break this down…..Bill Russell was born in Monroe, LA. Now I’ve never been to the lovely town of Monroe, but let’s trust Mr. Walton for a second and believe that it was rough for Russell. Nash grew up in Victoria, British Columbia!!!! (That’s in Canada for those not into Geography) Nash was born in Johannesburg, South Africa, but moved when he was three. But everyone and their mother knows Nash is from Canada right?

This comes from Wikipedia: His father John Nash was a minor league professional soccer player in South Africa. His brother Martin Nash has made 30 appearances for the Canadian national soccer team. His sister Joann was the captain of the University of Victoria soccer team for three years. Nash had decided to focus on basketball in his early teens, but still played soccer through high school, and was named British Columbia player of the year in soccer as well as basketball in his senior year. Soccer continues to be an important part of Nash’s life. In fact, when Dirk Nowitzki arrived in the NBA from Germany, he and Nash became close friends, in part because they enjoyed watching soccer together. In addition to soccer, Nash excelled at hockey and lacrosse as a child.

The post-World War II years saw Vancouver and Victoria also become cultural centres as poets, authors, artists, musicians, as well as dancers, actors, and haute cuisine chefs flocked to the beautiful scenery and warmer temperatures. Similarly, these cities have either attracted or given rise to their own noteworthy academics, commentators, and creative thinkers. Tourism also began to play an important role in the economy. The rise of Japan and other Pacific economies was a great boost to the BC economy.British Columbia has a robust resource dominated economy. Unemployment is currently at a 30-year low of 5.2%.

Wow that sounds like a rough life!!! His parents were awful to take him away from the apartheid in South Africa. They should be reported! I’m outraged! In order of rough places to live it’s
1) Compton 2) Detroit 3) British Columbia 4) Brooklyn, NY 5) Camden, NJ

It’s tough to make fun of William Theodore Walton III when he has such amazing catchphases as “That’s a terrible call!”, “What is a foul?”, and “Throw it down, big man!”, “Nice Pass!” (and the fact that his stuttering made him a mute growing up http://www.billwalton.com/stuttering.html), but seriously….come on. The fact that he argued the point makes it even more ridiculous.

Side Note: When I was looking up Bill Russell’s Bio this nugget caught my attention. “Russell Guest starred on the television series Miami Vice as a corrupt judge. ” Now that’s a cameo!