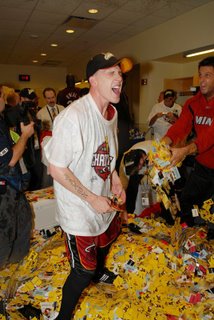 Well I woke up today hoping last night was a dream….It was looking up for me until I found this picture. Yep, the “Token white guys on the team acting like idiots picture.” If you can’t make out the person on the right that’s Jason Kapano, and you of course recognize White Chocolate.

Kinda like the lunch room in high school isn’t it? Most every photo I’ve looked at, with Jason Williams in it, has Kapono and Michael Doleac right in tow. While the “rest” of the team is off somewhere else together.

Well anyways I brought this up for a reason….what was that again? Oh Yea! (sorry the overt gayness of the picture distracted me for a second) I have to disagree with what Bill Simmons wrote this in his latest column:

“Here’s what happens if Miami wins the title: New Jersey will say to themselves, “Hey, maybe this could happen to us with Vince Carter”; Washington will say the same about Arenas; Boston with Pierce; G-State with Richardson; the Lakers with Kobe; New Team X with Iverson. And so on and so on. But that’s just the thing … we went through this last decade. There was only one MJ; the formula couldn’t be replicated. Same with Dwyane Wade; only LeBron can match him. And everyone else will fail trying, which means we can look forward to another decade of perimeter scorers going 11 for 32 in big games, teammates standing around while stars dribble at the top of the key waiting to challenge two defenders at once, and refs deciding every big game (like in Game 5) by how they interpret contact when the same guy is recklessly driving to the basket over and over again. Does any of this sound fun to you? I didn’t think so”

I would probably be dreading this too if it wasn’t for the fact that every player he just named is absolutely amazing. Not only were there not this many high-caliber players in Jordan’s days, but the rules were different as well.

There is a reason why this playoffs were exciting and that was because of the scoring, which is directly related to the rule changes. For Simmons to say that doesn’t sound fun is just ridiculous. 3 out of the 4 teams in the “Final Four” we’re just the opposite of this. The Heat won because they didn’t buckle under pressure, got to the line, and were more experienced. Anyone of those three other “Team” Teams could have won if they stepped up when it mattered. But like Simmons said…..Nash looked exhausted. Also it looked like Dirk was exhausted, and Detroit didn’t have the depth to compete. Well, which made them exhausted.

Simmons also said this, “If you enjoyed the Spurs-Mavs and Suns-Mavs series this year, just root for Dallas these last two games. Trust me. It’s for the best.”

Wait a tic Bill, you’re saying that the Spurs are exciting to watch??? When did this happen? So you’re saying that last year’s Finals were fun to watch? I hated the playoffs last year and even moreso the Finals. After the Wizards were swept by the Heat I KNEW the rest of the playoffs were going to be boring as hell. This year….not a chance. The Wiz lost to the Cavs in the first round, and I watched just about every minute of every game.

And while I may not be happy with the outcome of this year’s Finals because I hate Mourning and Payton……I still am never more excited about NBA Basketball, and can’t wait until the Draft and next season. Here’s to a great season, great playoffs, and months and months of crappy ass regular season beisbol.

I leave you with this video of Mark Cuban sweating like a pig…..Oh we’ll miss you Mark.
http://broadband.espn.go.com/ivp/splash?ceid=2493345