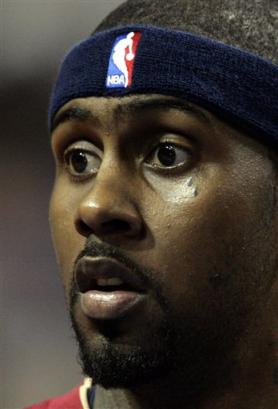 I feel really awful that Larry Hughes’ brother passed away, but I hope he realizes what the tear under the eye stands for. The 1992 movie South Central taught us all that only those who are straight Deuce can sport this type of ink.

Since I love using wikipedia so much here is what it says about the tear tattoo: The tear tattoo is symbolic tattoo that is placed underneath one’s eye to create the impression that the individual is crying. This tattoo has multiple, regionally-variant meanings. Oftentimes, it signifies that an individual has killed another person, particularly while in prison; at other times, it means that a family member, friend, or fellow gang member has died or been killed. The tear tattoo is often associated with thugs, convicts, and gang members.

I am aware that Hughes is from St. Louis, but that last sentence is a little telling isn’t it? As Julius Hodge will attest, it’s a crazy world out there Mr. Hughes. Be careful.

And while we are on the Cavs……what an awful second half showing they had in Detroit. In the first half Lebron was getting to the basket at will. Well in the second half, the Pistons began doubling him if he brought the ball up the court to get it out of his hands. For some reason, with the smaller Prince on him, Bron Bron could not get the ball back at all. He only had 1 second half FG…..that’s right…..One. And the Cavs scored a whopping 23 total points.

I know that Jordan had not won a playoff series at the same age, but I just don’t see that killer instinct in Lebron. Doing it against the defensive shumcks the Wizards is one thing, but not capitalizing against the defending Eastern Conference champs is an opportunity he can’t mess up. Tough to live up to those standards, but that’s what you get when you wear a Livestrong bracelet with your own name on it.

Side Note to the Cavs and Danny Ferry: You really need to get the kid some help….and quick. Lebron is a free agent in 2 years, and what have you given him? Z’s knees are almost done, Marshall is old as hell, Damon Jones is non-existent for 95% of the season, Eric Snow is slowing down, and the one signing that was supposed to save the team, Mr. Hughes missed 45 games this year. With no one in next year’s free agency pool (highlighted by Ben Wallace, Jason Terry, Stojakovic, Al Harrington, and Mike James [who?] Mike James) the Cavs will have to pull some magic to keep King James playing in the Quicken Loans Arena. The summer of 2007 will be the turning point for some of these teams that are getting ousted in the 1st and 2nd rounds. The 2007 Class could feature the names of: Paul Pierce, Chauncey Billups, Mike Bibby, Dirk Nowitzki, Vince Carter and Rashard Lewis.

I’ll be back later with the awfulness.