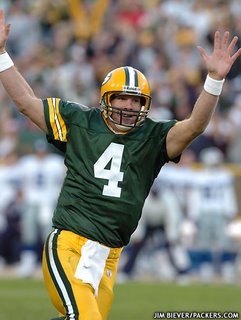 So there was no live-blog last night because our servers (Comcast High-Speed) were down. This was ultimately for the best because I was/am sick as hell and trying to make it through today in one piece. I think I only saw half of the game, and I dreamt the rest……when I woke up today I remembered the score being 35-28 at one point (two doses of Nyquil will do that to you).

Well anywho, I was thinking about Brett Favre this morning (no not like that sicko)…..and I remembered a comment that someone sent to me a little bit ago when I agreed with Easterbrook’s assessment of Favre.

Spectacular Sam said…Not for nothing, but the people saying Favre is overhyped are becoming just as annoying as the people overhyping him. We get it, even Packer fans know this. (Note: This comment was typed spite-free.)

You know what…..he’s right. Who the hell cares if Favre is in the twilight of his career or not. I’ve never watched a quarterback who threw more exciting touchdowns….hell his interceptions are more exciting than most other QBs TDs. And that crazy fake thing he does when he hands the ball off is still awesome (even though it has never worked)!

As an O’s fan I’m going to say something sacrilege, but if you don’t see this then I don’t know what to tell you. Brett Favre’s streak is more impressive than Cal Ripken’s. Staying active for 200+ games in football is just unheard of with the violence that happens every game. So why does he not get the same respect?

Favre’s career is almost perfectly paralleling Cal Ripken’s (Cal was never my favorite O because he killed me when hitting in the twilight of his career). The stats almost match up perfectly (as much as they can going from baseball to football)….let’s take a look:

Very comparable as first ballot HOFers (as comparable as they can be)….most notably in the statistic that hurts your team the most in each sport…..GIDPs and Ints. Cal Ripken is the career leader in GIDPs and Favre is only 18 ints away from George Blanda’s all time record of 278. But that’s going to happen when you play that many seasons.

And even deeper than that both have had the “He’s washed up he’ll never….Oh Shit did he just do that game?”

Cal’s came in the 1999 season when his streak had already been ended by Ryan Minor(!) the year before. He was facing the Atlanta Braves on June 13th and went 6 for 6, had 2 hrs, and 13 total bases (tying the club record)….and you know what I said, “Who the hell cares if he hits into a double play every other at bat. I’m watching arguably the best shortstop to ever play the game.” Cal also had the farewell game in which he homered off of Chan Ho Park in the 2001 All Star Game and won the MVP (only AL player to win it twice). (Not to mention homering on the nights he tied and broke the record)

So why do we complain about Favre and not so much about Cal? I personally think because of the inherent differences in the two sports. Baseball is a long, pace yourself season with almost no break in between seasons. Most fans don’t get into the swing of things until after the All-Star break, and if you’re an O’s fan then you’re done 3 months after the opener. In football there is so much time between the SuperBowl and the beginning of the season that the season is amplified that much more. There are only 16 games to get you to the playoffs and if you’re not in you need to be rebuilding. Fans are so much more intense about football over any other sport and if someone is holding “Your” team back then they must go. Whether they are Brett Favre or Joe Montana the season and the salary cap demand that you do so. 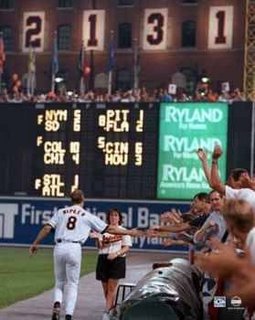 Well Brett has already had the “HWUHNOSDHJDTGame”. The Monday Nighter after his father tragically passed away was amazing. He threw for 399 yards and 4 Tds, and received a standing O from the Raiders and their fans (that alone should stand by itself). I’m just waiting for his 2001 All Star Game like game moment where everyone can finally just say,

“I am watching arguably one of the best Quarterbacks to ever play this game. Who cares if he throws 4 ints in a game.”

(And then he can run around Lambeau Field giving high fives to everyone in attendance.)