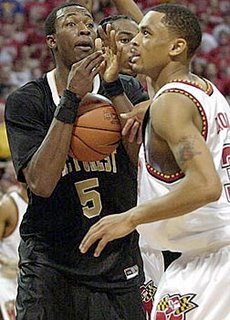 On the Mighty MJD’s site this morning he is quoted as saying “He makes the timeout signal, but I don’t know if he was actually signaling timeout (which, yeah, doesn’t make any sense… Josh Howard’s a smart player, he knows they don’t want timeout there), or just making the motion in the direction of Avery Johnson. Weird situation… I don’t know what happened.”

As I, Mister Irrelevant, and any Maryland Basketball fan can attest….this isn’t the first time this has happened to Mr. Howard. In college, on Feb. 24, 2002, Howard was with Wake Forest when he called a timeout he didn’t have with 1.3 seconds left against Maryland. It was called technical foul, and Juan Dixon made 1-of-2 free throws to win the game. He was so distraught after the game that he had to hold his jersey over his face to hide the tears as he was walking off the court. (This game came only a week after beating #1 Duke, and the game was at UMD) The thing I remember the most about that game now is the thing I forgot. Josh Howard was killing Maryland in that game…..and he was coming off a pretty awful ankle injury. Howard put up 18 points and 15 rebounds in 25 minutes of action, but the gutsy performance was overshadowed by the timeout.

This is almost identical to last night. He plays one, if not his best, game of the playoffs posting a 25 point and 10 rebound box score and then proceeds to miss two HUGE free throws and then calls a timeout when he shouldn’t have.

The only reason I bring up this point is to show that maybe he’s not as smart a player we all think he is. He is an amazing all-around basketball player, but in that situation ONLY the Point Guard show be looking and talking to the coach. Some fault has to be placed on Avery Johnson, but any smart player in that situation knows that the timeout should come after the second free throw. And the only reason Josh Howard looks guilty of not knowing this is because he started to walk off the court towards his own bench. That’s pretty telling in my eyes.

As for the foul call on Nowitzki….I (like everyone else) didn’t see it. The contact that occured did not affect the shot and in the last seconds of a game that’s usually not called. (Just ask Gilbert Arenas and the entire Wizards Team) On the flip side, Dwayne Wade setup that call the entire game with drive after drive (He went to the line as much as the entire Mavs Team-21) and I’m not surprised that it was called.

Another interesting note is that as much as Dwayne Wade was unstoppable in that game there was one person who shut him down. Marquis Daniels came into the game in the second quarter, and Wade missed six shots. He came in during the third quarter and DWade passed the ball away everytime. I’m not saying this wasn’t a fluke, but when a player is putting up 40 points nightly on you….you might want to try something else.

I cannot fathom seeing Gary Payton and Alonzo Mourning in a parade route down A1A- Beachfront Avenue!!!!!, but it appears that Dwayne Wade is trying to ruin my Schadenfreude.