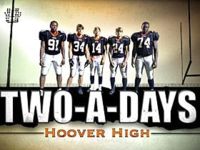 So if anyone has ESPN U….boy oh boy, you get a treat tonight! You get to see the High School from MTV’s Two-A-Days, Hoover High (Alabama) Ranked #1 (seen below), take on John Curtis (Louisiana) Ranked #11.

Game of the week: No. 1 Hoover (Ala.) faces its toughest regular-season test Friday when No. 11 John Curtis (River Ridge, La.) visits Metropolitan Stadium. The game is on ESPNU at 8 p.m. ET. Curtis, Louisiana’s top-ranked Class 2A team, has won 20 state titles, including the last two. RB Joe McKnight has rushed for 232 yards and five TDs on nine carries, averaging 25.8 yards a carry. Hoover averages more than 40 points.

All the players from the show are gone except Ross Wilson the Quarterback, but you can get an early view of the players I’m sure you’ll be watching in next season’s Two-a-Days. As far as the show it’s pretty much a farce. Coach Probst keeps trying to motivate these kids by threatening that they won’t get to play in college……well, they don’t. The only player to get a scholarship was Max Lerner #24 who is playing for 1-AA Furman. My boy, Repete #91, walked on to Auburn, but then quit the team. He says he will walk-on again next year. And the main star Alex Binder??? You can read about where he went in my closing joke at the bottom.

The 2007 senior football class, on the other hand, is considered by some recruiters to be superior to the 2006 class portrayed in the series, with wide receiver Brandon Clear, guard Patrick Crump, center Ryan Pugh, defensive end Byron Clear, and defensive tackles Josh Chapman and Kerry Murphy all considered legitimate Division I prospects. (Wikipedia)

Pressure! Pain! Heartache! ESPN! My favorite quote comes from the chick dating Alex halfway through….”I think we were meant to find each other as weird as it is.” Yeah, I’m sure he’s thinking the same thing as he bangs Co-eds at Bevill State Community College. Go Bears!