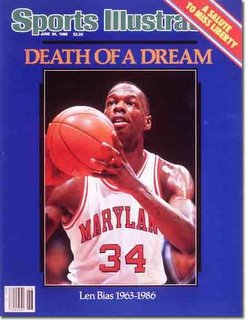 You’ve probably read a lot of accounts on this event and this day, but here is mine. 20 years ago today I was a seven year old kid living in Severna Park, Maryland, and I had just finished watching my first full season of Maryland basketball.

The teams in the Lefty Driesell era we’re always underachievers and never made it past the Sweet Sixteen in the Tournament. But there was one player who was other-wordly to me…one Leonard K. Bias.

I had watched some basketball before, but always found it boring. My dad would check out games from time to time, but I hadn’t watched with any passion. I remember so much about that 1986 season that it might rival my memories of the 2002 Championship season. The Terps were extremely overmatched by most of the teams in the ACC, but somehow they seemed to have the most fun on the court. My dad would watch every game in an oversized maroon leather chair (which he just got rid of) and I would sit on the floor in front of the giant Magnavox set (we somehow still have this, and giant back then was 24 inches). My favorite memory of that year was not of a Len Bias basket, but I play I’ll never forget.

The entire ACC would double Bias, but there was nothing they could do to stop him. At Cole Field House, and coming out of a timeout, the Terps had the ball under NC State’s basket. I never took my eyes off Bias when he was in the game, and I noticed him come out of the huddle and walk over to inbounder Kenny Gatlin to whisper something to him. Gatlin smiles, nods, and walks to the baseline. The ref hands Gatlin the ball as a pick is set for Bias on the block…he swings to the top of the key looking for the ball. Well everyone knows it’s going into him…. except him and Kenny G. Gatlin takes the ball over his head, and throws the BIGGEST fake on the defender (wish I remembered his name) guarding the inbounds play. The defender swings around searching for Bias…and in one motion Gatlin drops the ball to waist level and throws the ball off of the defender’s backside right back to himself, and tosses the ball up and in.

My dad, who is a relatively quiet/reserved man, jumps out of his seat and yells, “Oh my god…did you just see that?” And I replied, “Wait, he threw it off that guy…is that legal?” My dad then takes 15 minutes to explain the play, and everything I didn’t see. He broke down the defense for me, and every single player on the court was staring right at Bias. It’s a crazy thing to see, but no one commanded more attention on a court in college….not even Jordan. Even then as my dad spoke I knew I was witnessing something special.

The best part was just re-watching Bias stand at the Free Throw line with that half-cocked smile of his and shake his head as Gatlin ran by and slapped him on the ass. People always bring up the UNC Play, or the 41 points he dropped on Mark Alarie in Cameron, but it was that one play that has forever linked me to Maryland Basketball.

The horrible thing about Lenny’s death on June 19th, 1986 was the fact that he and Gatlin were hanging out that same night. And while Gatlin went to sleep…Bias went back out on the town. And the next day I felt like my world had ended when my dad told me in the car as he picked me up from Naval Academy Basketball Camp. I can’t remember for sure, but I’m pretty sure that’s when I got the life and death talk from the old man, and the world all of a sudden seemed a lot smaller.

A lot of people seem to be writing selfish stories about Bias. Bill Simmons calls the current Celtics woes the “Curse of Len Bias”, and that seems really unfair to me. The term witness is thrown around in Cleveland quite a bit these days, but I WAS a witness. The only Len Bias I remember is the person who I thought of second (only behind my Dad) as Maryland won the tournament in 2002. It’s always tough to say that a person has done more in death than in life, but Len Bias gave me two important things. First, was the fear of god in ever doing cocaine. And second (and most important), a lifetime of memories to share with my father this Father’s Day.

SOME QUOTES:
“Coach K told me I would have Bias one-on-one. No doubling, no help,” Alarie said. “After the game, I thought I had done a pretty good job until someone asked me how it felt to give up 41 points. I didn’t believe them. Then I looked at the tape. He didn’t get any easy shots, any easy looks. He had a hand in his face every time he took a shot, and he still made them. He was just that good.”- Mark Alarie

“If Len Bias ain’t the player of the world, then there ain’t no players.”- Lefty Driesell

“I’d have played against him for the next 14 years. I would have been in my prime and he would have been in his. I’ll never forget what he looked like. He was a ‘Wow!’ player. When Maryland played and was on television, I watched. It was like, ‘I need to watch this guy; I’ll be seeing him real soon.’ . . . It was just shocking. – Charles Barkley

“You can never tell how things are going to play out, but I’ll tell you this: When you’re playing like we did in those days, you don’t figure on getting a kid like Bias. He was a terrific player. . . . I would’ve had him and Bird as my forwards. . . . They would have been great together.”
– Red Auerbach